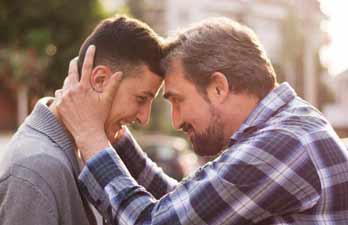 My friend’s 20-something nephew died today. Josh had struggled with alcohol and other drug use since middle school. His death forever changed the lives of many people in one fleeting second.

In line with their dysfunction, Josh’s parents, estranged from half their extended family including Uncle Ted, commiserated with the one relative who has had the most deleterious effect on their psyches, who devises wicked plans, sows discord among brethren, with feet that are swift in running to evil, all under a counterfeit air of Christianity.

You may ask Ted, “How can you know the quality of spirit that lives in another’s heart?” He would say, “Indeed, you are right — that is unknowable: I cannot ‘see’ into a person’s head or heart.” On the other hand, Ted has eyes and ears, which can distinguish behaviors that consistently run counter to the humanitarian Christian values with which he’s familiar. There is more to Christianity than the fervent belief that Jesus is the Son of God.

Josh’s death is a tragedy. But the good that could come of it is lessons learned by other parents in like situations.

John and Julie are devout evangelical Christians who do not use recreational chemicals at all, let alone compulsively. But they have deep-running, unaddressed psychic wounds, and the effects of those have been passed to their children. The “cycle,” definitely and unfortunately, has not been broken in this family.

Without mentioning the specifics of their childhood trauma (the lasting effects of which John and Julie deny), the results, the symptoms manifested in adulthood, comprise 1) a deep sense of victimhood, 2) an air of superiority (which every armchair psychologist knows usually is a cover for feelings of inferiority), 3) total denial of any responsibility for current family issues, 4) a rigid, emotionally abusive and distant patriarch with military-strict family rules, and 5) a manipulative matriarch who has learned and taught her offspring to make lying an operational mechanism to get around a union of rigidity.

The title of this piece is “An Identified Patient, an IP, Died Today.” Josh was the identified patient, the IP in his family. Mental health professionals use this term to describe the family member whose behavior is drawing obvious negative attention (in this case, chemical dependency and all its accompanying anguish). But inherent in this term is the reality that the entire family is emotionally dysfunctional and needs help.

The primary symptom in a dysfunctional family is denial — denial of the problems. And when those become too obvious to ignore, the parents deny any personal responsibility or involvement in those problems. When the IP finally comes to treatment, often, hopefully, the family is brought into the recovery process and its other members come around. That is, they become willing to learn how a family is a system, with all parts of the system affecting all other parts.

This didn’t happen in Josh’s family.

My friend Ted and I are former Certified Addiction Counselors and mental health professionals. That’s not a Ph.D. but it’s not nothin’. Though estranged, by their choice, Uncle Ted tried to warn the parents that their son was on the road to disaster: accident, incarceration, or death. Ted communicated to them that Josh was in desperate need of inpatient drug-alcohol treatment, followed by intensive outpatient therapy and meetings, and that they needed to participate in his treatment per their chemical dependency professionals’ recommendations.

Josh’s parents didn’t participate in his treatment. Oh, they attended the obligatory one or two meetings, then stopped. Their view was, “It’s not my fault, woe is me for having to deal with this problem, and please just fix my son.” And to their son: “Fix yourself. Just re-commit to God. Why can’t you simply decide to get better?!”

John and Julie had had brushes with counseling involving an older child, with similar results. They would go through the motions for a session or two, then withdraw. It was alternately too much trouble or they subconsciously felt they were getting too close to the flame. Either way, their attitude toward the child and therapist was the same: “This isn’t my fault. Just fix it.” After that experience they gained additional “blame ammunition” for later: They blamed Josh’s problems and ultimate death on the older child’s negative influence rather than examine their own core issues, which were at the heart of both kids’ self-destructive behavior.

It’s unclear what treatment Josh received in the half-year before he died. Ted saw his nephew regularly all his life up until five months ago — the nephew often spent the night at the uncle’s home, to the point of Josh’s mom chastising him with the rhetorical, scolding question, “Whose house do you live at?!” The young man being scolded was in his early 20s.

All we know is that — in spite of numerous texts, emails, and unanswered calls — Ted and his wife didn’t hear from their nephew for the last five months of his life, except for a lone text from him midway through that time saying he was busy trying to get his life together, and that’s why he couldn’t see or talk to them. He had no job, no money, and was symbiotically dependent upon his mother and father.

If Josh had attained a healthy sobriety and been doing well, he surely would have reconnected with his uncle, the ex-drug-counselor who lovingly had been talking to him about his progressing chemical dependency for the past two years. And he would’ve reconnected with his recovering older sibling who knew better than anyone what he was going through. The best speculation is that Josh was isolated, willingly or unwillingly, at his parents’ house — maybe in and out of some kind of treatment during that time, maybe not.

What we know is that he overdosed and died, subconsciously waiting for his mom and dad to get involved with his treatment, to explore the family system, and maybe to acknowledge that his problems were not 100% his fault.

John and Julie just wanted their son to get fixed.■

This story is not to say all drug addicts who die are victims of uncaring, uninvolved parents. Sadly, many chemically dependent adolescents and young adults don’t respond to help even with all family members doing everything in their power, doing everything “right.”

What this story does say is that to have the best shot at helping a chronically ill family member in mortal danger, you want all hands on deck, all parts of the family system working together to make the system healthy.