G.I. Joe Defends Etch A Sketch From Comparisons to Romney 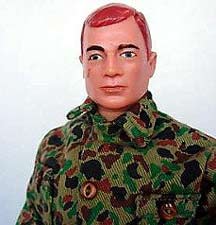 The iconic Hasbro Corporation ambassador G.I. Joe has broken his self-imposed political neutrality for only the second time in his career. At a hastily convened meeting with reporters today on the lawn of the Massachusetts statehouse, Mr. Joe slammed Mitt Romney and his campaign staff for their recent attempt to imply an endorsement from Ohio Art Company hero and G.I. Joe colleague Etch A Sketch.

It has been almost a week since March 21, the day Romney’s top campaign communications strategist, Eric Fehrnstrom, said on CNN, “[Mitt Romney] is almost like … Etch A Sketch. You can kind of shake [him] up and restart [the campaign] all over again.”

That interview prompted a firestorm over the Romney campaign’s attempt to attach its candidate to Etch A Sketch’s impeccable reputation for supporting family values, child development, and do-overs. Until today, Ms. Sketch and her supporters have remained silent. But now her people are crying foul because the mistaken impression that she supports the former governor has begun to diminish her credibility with the American toy-buying public.

A deafening hush fell over the press pool. You could hear an action figure (not a doll) drop.

Standing in for Mr. Romney was his wife (and new communications strategist), Ann, who responded, “That was really uncalled for, Mr. Ambassador.”

G.I. Joe shot back: “Governor Romney’s representative was the one who made the comparison — and I’m the one who knows Ms. Sketch well. And frankly, I think he is so far apart in the objectives he chooses for our country that I did not think the comparison was well-taken.”

The normally calm and apolitical — but today, apoplectic partisan — Mr. Joe went on to demand an apology from the Romney campaign for his friend, for the disparagement of her reputation by the false association with the governor.

It is a telling development when Etch A Sketch thinks your start-all-over-again behavior has gone too far. Even Etch A Sketch says you backtrack too much. Hey, Mitt: Etch A Sketch called; she wants her unlimited clean slates back. How many Etch A Sketches does it take to reset the Romney campaign from primaries to general election? An Etch A Sketch, a Mormon, and Mitt Romney are in a row boat … What’s the difference between Mitt Romney and an Etch A Sketch? A horse walks into a bar and the bartender says, “Why the long face?” (How’d that one get in there?)

Ultimately, most pundits believe the storm will pass. Romney is still considered a lock for limping into the Tampa convention in August with barely a bare minimum of Republican delegates to win the nomination and claim a sweeping mandate. In the end, the denunciation by Etch A Sketch surrogate G.I. Joe could be a blessing in disguise. The metaphor (simile?) really has little resemblance to Mitt Romney’s character. Sure, he backtracks, refreshes (history), and “starts over” as much as it takes to gain votes. But an Etch A Sketch can’t pander.

Let’s be clear. This comparison is not germane. Mitt Romney is not like an Etch A Sketch. And G.I. Joe is not a doll (he’s an “action figure”). ■