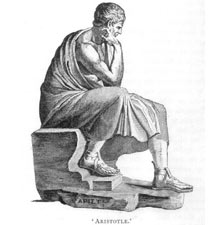 [Aristotle: “The speaker or writer must be a person of good intentions, dedicated to truth, accuracy, and goodwill.”]

These words used to carry weight. They used to mean somethin’ (— thanks to SNL’s Drunk Uncle). The concepts were hashed out in the days of Aristotle (student of Plato), Quintillion (student of Cicero), and Dr. Philato (student of Oprahmetrius). They are the foundation upon which communication through language rests.

On July 4, Independence Day, we celebrated the Second Continental Congress, in which critical thought, persuasion, and communication were again stretched to their fullest potential and produced the birth of our nation.

Critical thinking is not just for Founding Fathers anymore. It need not involve intellectual hoop-jumping that only philosophers, lawyers, or Mensa members understand. It can be a simple form of reasoning that everyone should use to cut through uncastrated adult male bovine excreta and get to the most accurate possible version of the truth.

IBATR (pronounced “EYE-batter”) comprises my simplified steps that represent the five legs of our critically thoughtful communication table. When even one or two legs are broken — or missing — the table wobbles. Milk spills.

This brings us to persuasion. The skillful use of this powerful tool (weapon?) carries an ethical responsibility, i.e., it should incorporate the principles of IBATR. Aristotle (the Stephen Colbert of his day) was concerned about the misuse of persuasion, which is why he and his Greek buds specified certain ethical requirements as being indispensable to the art and science of rhetoric (aka communication and persuasion). The speaker or writer must be “a person of good intentions … and dedicated to truth, accuracy, and goodwill [civility]” — not to mention exhibiting “fair-mindedness” and “credibility.” (Memering & Palmer, 2006.)

Thomas Jefferson and John Adams would have killed to have audio and video in their day. To be able to confront a rhetorical adversary with an indisputable record of what that adversary said, as he denies ever saying it, would be a perfect (rhetorical) world. But, alas, welcome to 2017. Audio and video are fun toys. But for 35-40 percent of the electorate and most elected Republicans, audio and video records have no meaning, no connection to their “logical” reality. The 35-40 percent believe the lies and denials and eat up the incivility, video evidence be damned. The elected Republicans look the other way and give tacit approval for the lying, denying, and boorishness.

Donald Trump is an uncivil rhetorical anomaly that even Aristotle and Thomas Jefferson might never have contemplated. As has been widely reported, Mr. Trump has no shame; he cannot be embarrassed by being caught in a lie. He simply responds by adding another one to the onslaught. Argumentum verbosium is logical fallacy by avalanche of plausible-sounding arguments too laborious to untangle. President Trump operates in a constant state of prevaricatum verbosium: logical fallacy by avalanche of mendacity (I saw Cat on a Hot Tin Roof) too voluminous to remember.

I don’t know if critical thinking and IBATR will protect our country through the era of Trump, but it’s the only thing we have. Well, we have the law. But the lack of IBATR and use of unethical persuasion drives those who control the applicable laws — currently, GOP congressional committee leaders and members. That brings us back to rhetoric and critical thought. It’s all we have; we can’t give up on it.

The next time Donald Trump says “The [inaugural] audience was the biggest ever”; “The Pew reports … show voter fraud”; “[I’ll] save … Medicaid … without cuts — have to do it”; “She was bleeding from her face-lift — or wherever”; “The mainstream media is all fake news”; — ask yourself if Trump is “a person of good intentions … and dedicated to truth, accuracy, and goodwill.” Is he “fair-minded”? Is he “credible”? (— thanks to Aristotle)

Contrary to White House deputy press secretary Sarah Huckabee Sander’s recent Ministry-of-Truth-esque regurgitation of President Trump’s sentiments, CNN is not fake news. At the end of last June, they retracted a story linking Trump ally Anthony Scaramucci to a Russian investment fund. CNN made a mistake, then made a distinctly un-fake news correction by issuing a retraction and firing three journalists responsible for the inaccurate story. The Trump administration castigated CNN for this very act of responsible journalism. Now, which one is “dedicated to truth, accuracy, and goodwill”?

IBATR constitutes the trunk of the communications tree. When this trunk is weakened, branches break or die — or get misquoted. Make this acronym your best friend. Put aside time for it. When it is speaking, give it your full attention, as if it were the most important acronym on Earth. But never, EVER, dispute your acronym’s word when the two of you are with friends. ■