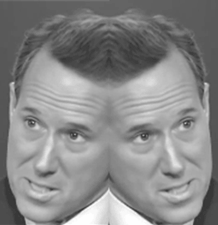 [The art of the double cross. Also, hug an investigative reporter.]

During the 2012 election campaign, I took a phylogenic turn and explored the evolutionary development of the two-headed Washington panderer:

“Rick Santorum is a panderer of the highest two-headed order. Santorum has positioned himself as supporting AND opposing the war in Afghanistan at the same time. On March 18, 2012, he summed up his position to Jonathan Karl on ABC’s This Week: ‘Let’s either commit to winning or let’s get out.’

“Karl pressed: ‘OK, so what does President Santorum do? Do you commit to winning, and what does that take? Or do you say it’s time to get out?’

“What!? Sen. Santorum wants to give ‘respect to the Taliban’!? …

“And Newt Gingrich is saying to himself, ‘I can’t believe I’m losin’ to this guy’ (— thanks to SNL).”

Today we have another quintessential two-headed Washington panderer in the news, but this one is America’s chief executive. Here’s the thing: I would take a President Santorum over a President Trump any day and twice on Sunday. And that is the colossally spine-chilling point — Rick Santorum looks good compared to Donald Trump. That scares the dynamics out of me.

Art of the (Iran Nuclear) Deal

Last Friday, President Trump “decertified” the Iran nuclear deal negotiated by the Obama administration to curtail Iran’s nuclear bomb development. The president is obligated to certify (or decertify) every 90 days, based upon U.S. inspectors’ reports, that Iran is complying with the deal. In return, America maintains the lifting of stringent economic sanctions on Iran.

Note that almost all of Trump’s top advisers have declared Iran in compliance and that it is a good deal; they have advised the president to keep his nose out of it. But in Donald’s mind, it has Barack Obama’s fingerprints and it must go. Behind-the-scenes reporting says the president has been throwing fits about continuing the deal and wants to cancel it outright. But in this “adult daycare” White House (— thanks to Sen. Bob Corker, R-Tenn.), Chief of Staff General John Kelly and others have quelled Trump’s tantrums just enough by convincing him to decertify rather than pull out.

Then Trump held a press conference in which, as the reporting analogy goes, he punted to Congress. He said it’s now Congress’ responsibility to “fix” the deal within 60 days, or he might still pull out.

The beauty of all this for a shifty, uninformed leader like Trump is that he’s positioned both of his pandering heads to project blame and/or take credit no matter which way the wind ends up blowing. And he looks (panderingly) tough to his 30-some percent base of supporters.

On a lighter note, consider how all this looks to Kim Jong Un as he (possibly) considers making a deal with Trump to curtail North Korea’s nuclear ambitions. Kim gets the news (even though his people do not). He’s watching the Iran deal. He knows about Donald’s multiple bankruptcies and Trump’s callous stiffing of numerous contractors, big and small. Kim sees the president as an unstable deal-breaker.

Donald Trump is neither tough nor a good deal-maker; he’s a two-headed Washington panderer.

Some of My Best Friends Are Republicans

This past Monday, President Trump (R-N.Y.) and Senate Majority Leader Mitch McConnell (R-Ky.) held a hastily contrived press conference to show the world how much they love each other. I included the political affiliation notations to underscore that they are in the same party. In recent months McConnell has referenced Trump’s “excessive expectations” surrounding the legislative process. The president has responded — with caricaturistic (and characteristic) overkill — by mercilessly Twitter-trashing McConnell (and other Republicans) multiple times for the failure to get Obamacare repeal-and-replace through the Senate.

Apparently Trump and McConnell have regrouped and called a truce. Although, if ever a public display of acquiescence personified the joke about looking like a hostage video, Mitch’s performance Monday was it. Of course, the president has no trouble turning on a dime if it will benefit him (in this case, strengthening the chances of getting his first legislative win: tax reform). In fact, Trump relishes his Oscar-worthy performances. He loves to infuriate critics by successfully manipulating his base, critical thinking be damned.

President Trump attacks legislators in his own party more than he attacks Democrats. But when he needs them, it’s as if the attacks never occurred. Look at his relationship with Sen. John McCain (R-Ariz.). One Trump pandering head attacks his war record. The other Trump head praises him when he needs his vote — then hands back to the first head to trash the senator when John doesn’t vote Donald’s way. The president wishes him well after McCain’s recent brain cancer diagnosis. Then when McCain publicly questions generic “half-baked spurious nationalism,” The Donald threatens to attack him, and “it won’t be pretty.”

This is two-headed Washington pandering of the highest order.

The president signed an order last Friday to undercut the Affordable Care Act further by stopping “cost-sharing reductions,” which significantly lower health care deductibles and copayments for Americans of lesser means. He’s already drastically cut funds to distribute enrollment information and cut access to the ACA sign-up website. And he frequently makes declarations such as “Obamacare is dead” or “Obamacare has collapsed” knowing many Americans will take him literally and not attempt to sign up.

The nonpartisan Congressional Budget Office says stopping CSRs will raise health care premiums 20 percent by 2018 and 25 percent by 2020, increase the federal deficit $194 billion by 2026, and eliminate all health care exchange options for 5 percent of the U.S. population.

Trump’s intention is to put his jackboot on the ACA’s neck and strangle it by significantly raising premiums and depressing enrollment. Obamacare helps many low-income and middle-class citizens. But once again, this time literally, it has former President Obama’s name all over it, so it must go.

The following Tuesday, Senators Lamar Alexander (R-Tenn.) and Patty Murray (D-Wash.) announced they had reached an agreement on bipartisan health care legislation they had been working on in various forms for months. Along with some reasonable concessions for Republicans, the bill would continue the CSRs for two years.

Later that day in a joint news conference with visiting Greek Prime Minister Alexis Tsipras, one of the president’s pandering heads said he supported the “short-term solution so that we don’t have this very dangerous little period” (the dangerous period his order would cause). Trump called the bill “a very good solution.” He seemed to take partial credit by saying he had been involved with its development.

Then — the next day — President Trump’s other head did a Twitter-backtrack:

“I am supportive of Lamar as a person & also of the process, but I can never support bailing out ins co’s who have made a fortune w/ O‘Care.”

The second half of this tweet is disgustingly dishonest on its two faces: 1) Trump is misrepresenting the payments as insurance company payoffs rather than low-income subsidies, which is what they are; and 2) The president is feigning umbrage toward insurance companies making more money when in actuality, by killing Obamacare, he happily will be giving his executive brethren exactly what they want: the ability to profit more and be restricted less.

The hypocrisy is breathtaking. Again, Donald has put himself in a position to land on either side of the fence, take credit either way, and project blame in whichever direction will help him.

President Donald Trump is a pandering two-headed panderer — who is redundantly panderous.

On Sunday night, CBS’ 60 Minutes devoted two of its standard three segments to a joint investigation it did with The Washington Post on a story related to the opioid crisis. The Post ran its piece the next day. The story of opioid epidemic deaths is bad enough. But the 60 Minutes/Post expose detailed the cynical sacrifice of tens of thousands of opioid/heroin overdose victims for pure greed. (When opioid addicts can’t get their pills, they often turn to heroin.)

Well after the existence of the problem was widely known, Rep. Tom Marino (R-Pa.) took many generous big pharma campaign donations to pass a law that would weaken the federal Drug Enforcement Agency’s ability to flag and stop unusually large drug company shipments of opioids. Huge portions of these questionable shipments end up on the street and in shady doctors’ hands under the guise of “pain clinics.”

Rep. Marino tried and failed for a few years to get his bill passed. In 2016, he and several other members of Congress finally succeeded in hoodwinking the Justice Department to go along with the industry-friendly relaxation of opioid regulations. The DEA had vigorously opposed these efforts for several years but ultimately had a leadership change and relented. This paved the way for sneaking the legislation through Congress.

Democrats and the Obama administration are not without responsibility. It appears this bill was rushed through the system under the ruse of helping patients in pain, with few legislators, Justice Department officials, or White House staff taking a good look at it. The sickening truth emerged only after Joe Rannazzisi — a former high-ranking DEA agent who was horrified by the massive number of drug overdoses — and others blew the whistle to the 60 Minutes/Post investigation.

Here’s the kicker: Tom Marino, until Tuesday, was President Trump’s nominee for White House drug czar. Yes, take that in. One pundit this week included Marino as an example of the administration’s poor vetting of candidates for top jobs. But I agree with Nick Confessore of The New York Times who said this week on MSNBC’s MTP Daily that Tom Marino was vetted perfectly: President Trump chose exactly the kind of candidate he wanted to oversee drug policy and regulation. He chose the kind of rich-business-executive-friendly candidate Trump has chosen for the majority of important White House Posts.

But investigative reporting happened. For all of Donald’s (I hate even to repeat the term) fake news accusations, the Forth Estate is exhibiting its indispensability more than any time since the Watergate era. If not for investigative reporters, Michael Flynn would still be national security adviser, reporting back to Turkey and Russia. Paul Manafort would be embedded somewhere high up in the administration, under Ukrainian and Russian oligarchical influence. Tom Price would still be flying extravagant charter flights at taxpayer expense. And Ivanka’s shoe line would still be producing designer pumps in Chinese sweatshops. Oh, wait — that never stopped.

Ultimately, Rep. Marino was exposed, and Trump had to make him withdraw from the nomination. But the president knew who he had. Without the investigative spotlight, Donald was happy to continue populating the swamp with the swampiest of creatures ready to benefit his rich peers at the expense of the little people. Once his nominee was publicly soiled, Trump’s other pandering head popped up to show faux empathy for the poor drug addicts.

And all of that is just this week.

“Though not well-known by its scientific classification, this variety of bipedal primate is spotted periodically throughout the United States. … The ubiquitous Washington panderer is a subspecies of Homo sapiens politicus, which itself is a subspecies of Homo sapiens, of the genus Homo. … This mammal [can be] a cute, cuddly creature while pandering … [At other times] it exhibits aggressive, vicious, and fiercely territorial behavior.”

Donald Trump is the most panderous (and venomous) of the two-headed Washington panderers. He is a panderer of the highest two-headed order. ■