Traditional Thanksgiving: Turn on the Game and Please Pass the Nationalism 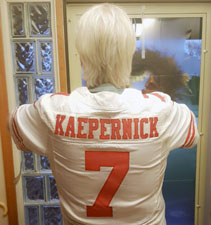 This year’s Thanksgiving get-together with my Caucasian extended family was traditional fare: celebrated at Mom-and-Dad’s house, where I grew up; reminisced with lots of adult nieces and nephews, aunts, and uncles after the traditional feast; watched the traditional NFL Detroit Lions game on television; and traditionally avoided any discussion of politics, current events, or religion.

“How can I liven up this party?” I asked myself. “I know — I’ll go out to the car and put on my new Colin Kaepernick No. 7 NFL football jersey.”

I had worn it only once up until then, in the company of some liberal buddies, so it hadn’t had a good test run yet.

I nonchalantly re-entered my parents’ house but was spotlighted right away by two twenty-something nephews.

I own the away version of the San Francisco 49ers jersey, so the bright crimson “7” and letters K-A-E-P-E-R-N-I-C-K against the brilliant white backdrop really caught their eye. Additionally, I’m only a fair-weather football fan, so I in my new jersey was flagged immediately as standing out.

One of the twenty-somethings, knowledgeable about all-things NFL, produced a wide smile and said, “Ohhhh Noooooo,” in a friendly but chiding kind of way. The other young nephew, not a football fan, needed an explanation, which I was happy to provide. This nephew, though not a sports fan, is an open-minded liberal thinker. After my explanation, he immediately got what his Uncle Tom was conveying.

For the uninitiated, Colin Kaepernick was the San Francisco 49ers’ starting quarterback who began “taking a knee” last year during the pre-game national anthem. This was in respectful protest of the statistically high number of American black men killed by police (or neighborhood watch guys) who have not been held accountable. You might have heard of the Black Lives Matter movement. Subsequently, several other NFL players began dropping to one knee during the anthem in embrace of Kaepernick’s protest. Note that Colin settled upon kneeling rather than sitting because it is seen as a more reverential, almost prayerful form of dissent.

Then President Trump began tweeting and speaking about those “son-of-a-bitch” pro football players who should be fired for exercising their First Amendment rights (while, by the way, breaking no NFL rules). After that, the practice of taking a knee was adopted by a multitude of players, and even some coaches and owners for a few games. Additionally, many more NFL personnel locked arms on the sidelines and put supporting hands on kneelers’ shoulders in solidarity.

To add insult to insult and injury to injury, Colin Kaepernick’s San Francisco contract expired at the end of last season and no NFL team has picked him up. Many independent surveys and quarterback statistical analyses have been published showing Kaepernick’s skills falling somewhere in the middle of all current NFL starting quarterbacks and at the top of all backups. This is clearly a blackballing attempt by owners to keep Colin out of the league.

These are the reasons I bought a Colin Kaepernick jersey: 1) I support the issue he was originally protesting, i.e., the statistically high number of black men killed by police with no accountability; 2) the attempt by President Trump to shut down these protests; and 3) the apparent blackballing of Kaepernick from the league.

So anyway, while I was modeling my new Kaepernick jersey, one aunt said under her breath, “Well, that’s not right; some of our family’s veterans fought and died for that flag.”

After I gave the Black Lives Matter explanation to my twenty-something nephew, a forty-something nephew said with a haughty look and tone — wait for it — “Well, All lives matter. And besides that, blacks are killing blacks.”

In all fairness, anyone who knows me (and my extended WASP family) knows that I fully expected the All lives matter retort; in fact, I intentionally dangled the bait. But the follow-up non sequitur from this middle-aged nephew of, “Blacks are killing blacks,” threw me off a little. This is the kind of irrational connection someone like Trump would … Ahhhhhhh.

Yes, there are Donald supporters in my extended family, though the All lives matter guy probably would say he was one of the reluctant Christian-Right Trump supporters who are only in it for the Supreme Court picks. He would say he does not support Donald’s misogyny. And he would say Donald is not racist.

Yeah, I let him have it. First, I addressed the non sequitur, then the sequitur: “If you’re referring to black-on-black crime, there is far more white-on-white crime in this country. But the real point is, whatever statistics you might be imagining, ‘Blacks are killing blacks’ has zero relationship to the relative, statistically high number of black men killed by cops without accountability.”

Second, “The kneeling protest is not against the American flag or the national anthem. It is a respectful protest — against the killing of black men by police — during a moment of enhanced public attention, i.e., during the anthem. It is intended to raise consciousness about an issue that is tearing our nation apart. Therefore, it is done during a national ceremonial occasion.”

I stood up, did an imaginary outstretched-arm mic drop, then threw the imaginary football to the ground before my end-zone dance (— writer’s embellishment).

Actually, I shut up, things got a little quiet for a while, then we all resumed nonpolitical football talk while watching the Lions lose to the Cowboys.

I left my jersey on.

It’s clear to anti-racists that All lives matter Caucasians are racist to some degree, though they likely will steadfastly deny it. I will stipulate that there are gray shades of bigotry, and perfection does not exist. But when a white person says, “All lives matter,” in response to mention of the Black Lives Matter movement, they exhibit profound ignorance of the latter’s meaning. Sure, when taken totally out of context, All lives matter is a nice, though obvious (therefore, in this case, meaningless) sentiment. But when it comes to Black Lives Matter, they are ignorant of — they ignore — the root of the movement: that too many black men die at the hands of police who are not held accountable.

The political rise of Donald Trump has given blatant racists comfort and latent racists permission to come out of the closet. Most out-of-(and-still-in)-the-closet racists, however, adamantly deny their status. In many ways they are the most harmful to society. Racism is much more than epithets and slurs. Those who support discriminatory politicians and policies while simultaneously denying their inherent bigotry commit the worst of it.

Donald Trump is a product of underlying American racism. No writer I know of has explained this more clearly than Adam Serwer of The Atlantic.

“The specific dissonance of Trumpism — advocacy for discriminatory, even cruel, policies combined with vehement denials that such policies are racially motivated — provides the emotional core of its appeal. …

“While other factors also led to Trump’s victory — the last-minute letter from former FBI Director James Comey, the sexism that rationalized supporting Trump despite his confession of sexual assault, Hillary Clinton’s neglect of the Midwest — had racism been toxic to the American electorate, Trump’s candidacy would not have been viable.”

Serwer supports one of the theories I laid out in my book Barack vs. the Anti-PC: Laying the Groundwork for a 2016 Donald Trump Presidential Run: that the election of President Obama was the catalyst for a Trump rise — though Mr. Serwer was more succinct than I was:

“Birtherism is a synthesis of the prejudice toward blacks, immigrants, and Muslims that swelled on the right during the Obama era: Obama was not merely black but also a foreigner, not just black and foreign but also a secret Muslim. Birtherism was not simply racism, but nationalism — a statement of values and a definition of who belongs in America. By embracing the conspiracy theory of Obama’s faith and foreign birth, Trump was also endorsing a definition of being American that excluded the first black president. Birtherism, and then Trumpism, united all three rising strains of prejudice on the right in opposition to the man who had become the sum of their fears. … The great cataclysm in white America that led to Donald Trump was the election of Barack Obama.”

In my book, I supplemented this theory with the observation that party leaders ignored vicious Republican tea party bigotry for short-term gain. GOP leadership wouldn’t publicly support the perpetration of racial epithets, dog whistling, and conspiracy theories, but it also would not denounce them. Party bosses signaled to their base that anything goes. Donald Trump heard that message loud and clear. To its shock, the Republican establishment lost control of its party and has now reaped what it has sown.

“Half a century after Senator Barry Goldwater of Arizona rose to prominence by opposing civil rights legislation designed to dismantle Jim Crow, the Republican Party’s shift toward nativism foreclosed another path not just to ethnic diversity, but to the moderation and tolerance that sharing power with those unlike you requires.”

Adam Serwer uses exit polls and other data to dismantle the myth that President Trump’s populist popularity was responsible for his win, that the poor, working class, and middle class of all ethnic groups thought he would raise them up economically and save them from being left behind:

“Overall, poor and working-class Americans did not support Trump; it was white Americans on all levels of the income spectrum who secured his victory. … The answer cannot be that black Americans were suffering less than the white working class or the poor, but that Trump’s solutions did not appeal to people of color because they were premised on a national vision that excluded them as full citizens.”

Finally, Mr. Serwer answers the question that perplexes all anti-Trump thinkers: Why do Donald’s supporters stick with him in spite of his transparent con artistry, i.e., his pathological lying, broken promises to his base, and swamp-filling appointments and policies?

“One measure of the allure of Trump’s white identity politics is the extent to which it has overridden other concerns as his administration has faltered. The president’s supporters have stood by him even as he has evinced every quality they described as a deal-breaker under Obama. … Conservatives portrayed Obama as a vapid celebrity; Trump is a vapid celebrity. … There is virtually no personality defect that conservatives accused Obama of possessing that Trump himself does not actually possess.”

Now, what do we do about it?

What do you call a white-guy uncle wearing his Colin Kaepernick jersey to a Caucasian family gathering to provoke middle-aged nephews and enlighten twenty-something nephews?

Quote of the Week

“I’ll say this for you. He’s been one of the best presidents I’ve served under.”

(Hatch, Orrin, R-Utah, U.S. senator; Q&A with reporters outside Senate chambers; 11/29/2017.) (responding to a question about President Trump and his tweets earlier in the day)

11/20/2017 | “The Nationalist’s Delusion”: Where does President Trump’s support come from, and how does he maintain it in spite of incompetence and broken promises?