War of the Words (and the Worlds) 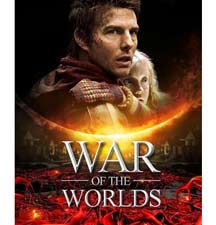 Think of the Trump administration and Steven Spielberg’s 2005 movie “War of the Worlds.” A massive campaign of galactic devastation carried out by foreign evildoers overwhelms the United States and Earth. The same thing happens in Spielberg’s movie.

I’ve been thinking lately of the comparison between the Trump administration and Steven Spielberg’s 2005 movie War of the Worlds. A massive campaign of galactic devastation carried out by foreign evildoers overwhelms the United States and Earth. The same thing happens in Spielberg’s movie.

You knew that was coming.

Donald Trump has been a master warrior of words, driving his message and distracting from opposing, truthful messages. Of course, this is exponentially easier to do if one is willing to dispense with all consciousness of ethics and morality. Nevertheless, those people have existed before, but probably none as good on the American national stage as Donald.

In the president’s war of the words, he has one mission — to perpetuate self-protecting, self-serving lies. His weapons are rally-tested terms, phrases, nicknames, and epithets, which he deploys from his tweety pulpit. He reiterates, reprises, and replays them until they are drilled into supporters’ and low-information voters’ heads. Legitimate news organizations feel obligated to repeat and rebut them. But no amount of critically thoughtful rebuttal can match Donald’s redundancy juggernaut.

For those civic-minded citizens who follow the news regularly, it’s exhausting. In the study of rhetoric and logical fallacy, there is a concept referred to in Latin as argumentum verbosium: a verbal diarrhea of argumentation that continues ad nauseum (“to a sickening or excessive degree”). During debate, the offender throws out numerous long-winded (verbose), complicated, and often poorly presented arguments so tedious to unravel that the arguer often gets away without any opposing response. Opponents either don’t understand or are loathe to sift through the elaborate fallacious structure of details. Well-known proponents of argumentum verbosium, delivered ad nauseum, include Rush Limbaugh, Newt Gingrich, and Sean Hannity.

For this new world of Trumpism, I’ve made up a term, corruptum ad nauseum: a pattern of corruption — that continues to a sickening or excessive degree — in which the offenses become too numerous to remember. Literally (and I don’t use that word lightly) almost every day Mr. Trump shocks us with another corrupt assault on another presidential norm or tradition, or the law. This nonstop corruption is a conscious strategy to make us forget his previous day’s transgressions. It works.

When I first installed Bob (the dog) Barker’s invisible electric fence, I set the shock collar to its lowest possible setting: “1” (of “5”). The first time he crossed the line, the jolt surprised him so much he did a backflip. I felt bad and wondered if this was a humane device. Bob soon learned his boundaries but occasionally, defiantly tested them. After a few months, he grew so accustomed to what had become a mere mild tingling that I had to raise the level to keep him in the yard. Within a year, he worked his way up to “5” and it still barely fazes him.

In the beginning, Trump’s crowd-size lies, blatant self-dealing, and the like made us do backflips in our astonished anger. But the president has kept our collective shock collar turned up to “11” for a year and a half. The offenses barely faze us now. We don’t get jolted anymore. We’re used to it. We can leave the yard whenever we want without feeling a thing.

Trump’s near-daily strikes on ethics, presidential decorum, and the rule of law all run together in our memories so that no one incident stands out. Corruptum ad nauseum. That is the point. As I alluded to previously, people with a minimal or normal pull toward morality could not keep this up. Donald is different. Only four things drive President Trump: 1) financial gain; 2) maintaining his support; 3) sticking it to Obama; and 4) feeding his ego.

In seeking financial gain, Donald has hit the jackpot being elected president. His drive toward greed is addictive and obvious as he strives to squeeze as much as he can from the office before his presidency ends. He is pushing (and exceeding) many legal limits and defying numerous presidential norms to maximize his take.

In maintaining his support, President Trump will go to any lengths, support any cause, if it serves him. Donald has no guiding policy principles. Does anyone really think he cares one way or another about abortion, coal workers, or the national anthem? A popular word today is transactional — every decision is a consideration of What’s in it for me? Here’s an example: Trump has settled into giving the religious right the judges and policy support they want in return for their hypocritical, unrighteous support for him.

For their part, evangelicals have sacrificed almost the entire spectrum of the culture of life — war, poverty, education, immigration, civil rights, health care, etc. — for one lone cause: abortion. Through this transactional agreement, the religious right has forever forfeited their argument that character matters in our leaders.

The deadly Donald plague cannot sustain itself indefinitely. Clearly, the president has gotten away with a hundred times more wrongdoing than anyone could have foreseen. A common Washington parlor game is to count how many times pundits have predicted this or that Trumpian atrocity would finally do him in. In today’s 2018 mid-term primary season, however, we see GOP candidates pummeling fellow Republicans for daring to withhold support for candidate Trump in the aftermath of the release of his abominable Access Hollywood tape.

But things are feeling different lately. Many pundits believe that observing Donald tweeting about, speculating about, and granting pardons to undeserving criminals, including himself, is a sure sign he knows the walls are closing in. The common refrain is this: Mr. President, pardons are only for guilty people. If you’re not guilty, why are you tweeting that you can legally pardon yourself? Why are you bringing this up?

It is widely believed Trump’s recent rampant talk of pardons — for people guilty of the same crimes many of his campaign staffers have committed — is to desensitize us to the idea before he inevitably moves to protect himself, when Bob Mueller and a Democratic Congress finally corner him.

In War of the Worlds, Earth was saved when the aliens suddenly succumbed to some mysterious virus or bacteria to which they hadn’t been immunized against by long-term exposure, as humans had. Yeah, it was a little convenient.

Still, the analogy to the Trump administration holds. Special Counsel Robert Mueller, a Democratic House, and basic human decency are the “bacteria” that will destroy Donald and his army of evildoers. Trump and his troops had little contact with the (good) bacteria that are sorely lacking in their world. But now that they’ve invaded the U.S. government, a world they thought they could conquer, their lack of immunity to ethics, morality, and humanity ultimately will fell them.

Defeating the bad guys is just taking a little longer than it did in War of the Worlds. ■