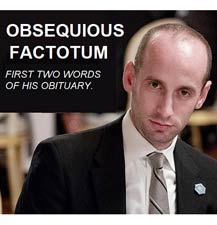 “Throughout this process, I have witnessed firsthand your appreciation for the vital role of the American judiciary. No president has ever consulted more widely or talked with more people from more backgrounds to seek input about a Supreme Court nomination.”

“… said [Kavanaugh], after apparently reviewing the selection processes for about 160 previous Supreme Court nominees over about 230 years.”

Aaron Blake of The Washington Post sardonically gave Judge Brett Kavanaugh the benefit of the doubt in mockingly assuming he had actually researched “160 previous Supreme Court nominees over about 230 years.” His Honor apparently took the time to determine that Mr. Trump had done the most homework of any judge-picking U.S. president in history. [SARDONIC ALERT]: Brett, like Donald, really believes in doing extra credit work, going that extra mile to research his subject thoroughly before speaking.

Note that this excerpt appeared very early in Brett Kavanaugh’s nominee acceptance speech, immediately after, “Mr. President, thank you.” Kavanaugh felt compelled to gush sycophantic, falsely superlative-alicious praise on the egomaniacal monarch wannabe who nominated him. Or worse, the judge dutifully followed Trump administration back channel instructions to do so.

Keep in mind, Donald considered pulling Neil Gorsuch’s nomination — after he announced it — because Gorsuch did not, at first, express sufficient public loyalty and appreciation to Trump in return for this primo position. Judge Gorsuch somehow got the message and wrote the president an apple-polishing letter of “thanks” and “gratitude” a few weeks later: “Your address to Congress was magnificent. And you were so kind to … mention me. My teenage daughters were cheering the TV.”

Will the Circle, Be Unbroken, By and By, Lord, By and By

Now Kavanaugh’s bootlicking, straight out of the chute, is another deeply troubling sign. It continues in the vein of obsequious factotums currently or formerly in Trump’s orbit. (I’ve been looking for just the right opportunity to paraphrase CNN’s Jake Tapper since his brilliant takedown of White House senior adviser Stephen Miller this past January.) Notice any similarities to Judge Kavanaugh’s remarks?

“If elected, Mr. Trump, I can state unequivocally, will be the healthiest individual ever elected to the presidency. … [The candidate’s] physical strength and stamina are extraordinary.”

(Bornstein, Harold, MD, Donald Trump’s personal physician of 35 years; statement of patient’s medical health; 12/4/2015.) (written by [dictated to?] the good doctor in five minutes while the candidate’s bagman waited in a limo outside the physician’s office)

“Mr. President … your confidence in me has blessed me personally. … Your courage, steadfastness, and resolute commitment to get results … is in fact occurring at an unprecedented pace and I thank you for the opportunity to serve you. I count it a blessing to be serving you in any capacity. … My desire in service to you has always been to bless you as you make important decisions for the American people. I believe you are serving as President today because of God’s providence. … I pray as I have served you that I have blessed you and enabled you to effectively lead the American people. Thank you again, Mr. President, for the honor of serving you. … Your Faithful Friend, Scott Pruitt.”

Let me get this straight: Scott Pruitt feels blessed to serve President Trump? I hear an unspoken future pardon request buried in there somewhere.

Let’s check in with the vice president:

“Thank you for … an agenda that truly is restoring this country. … You’ve signed more bills rolling back federal red tape than any president in American history. … You’ve unleashed American energy. … You’ve spurred an optimism in this country that’s setting records. … I’m deeply humbled, as your vice president, to be able to be here. … Because of your leadership, Mr. President … you’re delivering on that middle-class miracle. … Mostly, Mr. President, I’ll end where I began and just tell you, I want to thank you, Mr. President. I want to thank you for speaking on behalf of and fighting every day for the forgotten men and women of America. … Because of your determination, because of your leadership, the forgotten men and women of America are forgotten no more. And we are making America great again.”

This went on for three minutes straight, with Pence praising Trump about every 12 seconds. My God, has this man no dignity, no self-respect?

Back in June 2017, at another televised presidential reality show episode – I mean, Cabinet meeting – Donald had his top lieutenants around the table, one by one, offer their personal, public praise of the boss:

“At Monday’s Cabinet meeting — the first President Trump had held with everyone on board — White House Chief of Staff Reince Priebus spoke up to thank Trump ‘for the opportunity and blessing that you’ve given us to serve your agenda and the American people.’ … It’s an honor to be able to serve you,’ said Attorney General Jeff Sessions. ‘I am privileged to be here,’ said Labor Secretary Alexander Acosta. ‘Deeply honored.’ ‘What an incredible honor it is to lead the Department of Health and Human Services at this pivotal time under your leadership,’ Tom Price, secretary of that department, added when it was his turn to speak. ‘I can’t thank you enough for the privileges you’ve given me and the leadership that you’ve shown.’ …

“Transportation Secretary Elaine Chao thanked Trump for visiting her department last week, relaying that ‘hundreds and hundreds of people were just so thrilled.’ And Agriculture Secretary Sonny Perdue, after noting that some of his colleagues had touted their international travels for Trump, served up this: ‘A lot of us just got back from Mississippi. They love you there.’”

Kissing of the Ring

Somehow, almost everyone in Trump’s circle becomes overwhelmed with the compulsion to express how “blessed” they are “to serve” him. They get the presidential message intuitively, or, as I mentioned above, through some sort of Trump back channel. Either way, they’ve learned what it takes to keep their jobs, their self-enriching golden geese, and stay off the president’s Twitter feed.

This entire mess is inching us closer each day to the loss of precious American democratic norms, civility, personal and organizational ethics, and proper separation of powers. Congress is supposed to oversee the executive branch, to reign in its abuses. But the Republican majorities in the House and Senate have become accomplices to Trumpian corruption and really bad government. The judicial system is supposed to be apolitical, at least in appearance. Potential Supreme Court justices should not feel compelled to publicly kiss the president’s ring to get their jobs.

Then there’s the whole Russia thing. ■