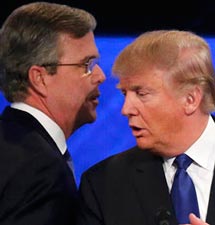 Trump’s prescient prediction of presidential investigations was otherworldly. He was right about “Director Comey and the great, great special agents … will be able to collect more than enough evidence”; he nailed his forecast of “efforts to disparage them and to discredit them.” The candidate told us “we could very well have a sitting president under felony indictment and ultimately a criminal trial.” Except the subject of his prophesizing turned out not to be Hillary. Only Donald could subconsciously project his own presidential future. That’s because only Donald knew, at that time, that his life philosophy comprises inherent criminal and amoral behavior. Priceless.

“Donald Trump is unhinged. His ‘policy’ proposals are not serious.”

“Donald, you know, is great at the one-liners, but he’s a chaos candidate and he’d be a chaos president. He would not be the commander in chief we need to keep our country safe.”

“Hillary has engaged in a criminal massive enterprise and cover-ups like probably nobody ever before.”

“There’s virtually no doubt that FBI Director Comey and the great, great special agents of the FBI will be able to collect more than enough evidence to garner indictments against Hillary Clinton and her inner circle, despite her efforts to disparage them and to discredit them. If she were to win this election, it would create an unprecedented constitutional crisis. In that situation, we could very well have a sitting president under felony indictment and ultimately a criminal trial.”

“Her current scandals and controversies will continue throughout her presidency and … it’s gonna be virtually impossible for her to govern. … It’s gonna be just another mess for another four years, folks. A mess.”

I know. Revisiting the Jeb Bush “chaos candidate” predictions has been done before. And so has revisiting Trump’s eerily accurate projectionist predictions about Hillary being under constant criminal investigation were she president.

“Endless investigations. The biggest scandal since Watergate. Cover-ups. An inability to govern. A possible constitutional crisis. These were all arguments that Donald Trump made against Hillary Clinton in the closing days of the 2016 presidential election. But now with The Washington Post reporting overnight that Special Counsel Robert Mueller is investigating whether President Trump attempted to obstruct justice, it’s worth recalling the rhetoric Trump used in the final two weeks of the ’16 presidential campaign.”

The NBC article’s opening paragraph didn’t even mention the FBI. Trump’s prescient prediction of presidential investigations and indictments was otherworldly. He was right about “Director Comey and the great, great special agents … will be able to collect more than enough evidence”; he nailed his forecast of “efforts to disparage them and to discredit them.” Donald foretold the “unprecedented constitutional crisis” into which we’re about to descend. And he was spot on (a term I loathe, but I’m fresh out of synonyms for accurate) in his fear that “we could very well have a sitting president under felony indictment and ultimately a criminal trial.”

Except the subject of his prophesizing turned out not to be Hillary. Only Donald could subconsciously project his own presidential future. That’s because only Donald knew, at that time, that his life philosophy comprises inherent criminal and amoral behavior. Priceless.

The above article from June 2017 by NBC’s Chuck Todd and friends is poignant. It’s worth the read.

But that was a year and a half ago. So much has developed since then. As the new year turns over, it’s a good time to take stock — and a bad time to own stock (because Trump’s unhingy-ness has been tanking the market).

Even Jeb didn’t foresee it actually could be plausible that we have a compromised president beholden to Vladimir Putin — a Russian asset in the White House whose grooming began long ago. Even Jeb couldn’t have predicted the possibility that the “golden showers” tape really exists.

Donald Trump would be happy today if he were only considered a “chaos president.” To his chagrin and ours, he’s now also considered a long-time crook by two-thirds of Americans. He is widely known as the first U.S. president whose primary goal for his presidency is to enrich himself, now and later.

I’ve said it before, and I’ll say “I’ve said it before” again: The endless list of offenses quantifying Donald Trump’s criminality, amorality, and incompetence is overwhelming to the majority of people in the country, even many of his critics. Nothing has ever risen (fallen?) to this level of quality and quantity — which is exactly the way Donald likes it.

You would think reports of scandals and criminal offenses should be like Kryptonite to Donald. In small doses they are. But pile up a massive mountain of Kryptonite and even Superman becomes immune to it. Donald knows that a few isolated stories of paying off paramours and sucking up to Putin are very harmful to his cause. But two years of innumerable chaos, crime, and collusion stories give him an ocean of camouflage. Who remembers what accusations — or proven wrongdoings — were reported last week, let alone last year? There are so many reports that regular people say to themselves, “It can’t all be true — no one is that crooked.”

Or more concerning still, they say, “Nothing matters anymore.” President Trump and his apologists push this narrative regularly, primarily with non-stop lying. If nothing matters anymore, then “truth isn’t truth,” to quote Trump’s media lawyer, Rudy Giuliani. Donald’s lies don’t matter. His crimes don’t matter. It doesn’t matter who is president, or senator, or governor, or mayor — all politicians are crooked. At least crooked Donald is shaking things up, just as he said he would. And don’t forget about the Supreme Court.

This is a terrifying state of mind for the country to be in. Ari Melber, host of MSNBC’s The Beat, did a great segment on “Nothing matters anymore” last night, so I won’t take credit for the theme. But it fits perfectly with what I’ve been saying about the mountain of Kryptonite. Just because there are too many Trump offenses to track doesn’t diminish the damage caused by each one.

I urge everyone to consult Bill Moyers’ and Steven Harper’s timeline, Committee to Investigate Russia: Everything We Know About Russia and President Trump, at investigaterussia.org. I know most of you don’t have time to do this regularly. But at least know it is there, that it exists. At least bookmark it. Know that all the things you don’t have time to research about Trump and Russia are out there somewhere and that they matter.

Also remember that the Bill Moyers site covers only the Trump-Russia probe. Keep this within your consciousness: Our current president is under criminal investigation into every major component of his business and political existence, including the campaign, transition, inaugural committee, presidential administration, Trump Foundation, and Trump Organization. There are seven sets of prosecution teams investigating 17 separate court cases. There are federal and state investigations. And these are not for jaywalking, as his supporters would have you believe.

Finally, the Russia probe and multiple criminal investigations are apart from what President Trump is doing to our position in the world community and national security. Like the scandals and crimes, Trump’s foreign policy blunders get lost in the sheer number of them. But simply look to Secretary of Defense James Mattis’ letter of resignation and the alarm surrounding it coming from our defense and intelligence networks. Once you pay attention, these things are frightening. ■