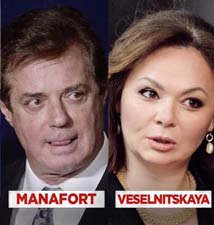 The Manafort-Kilimnik connection clearly constitutes collusion. The Don Jr.-Veselnitskaya connection clearly constitutes collusion. Were the actions of Paul Manafort and Donald Trump Jr. part of an illegal conspiracy to steal the 2016 presidential election? Did Donald Sr. know about it? Did he sell out America to enrich himself? Does a large brown furry mammal belonging to the family Ursidae (of the order Carnivora) defecate in a woodland area supporting an understory of shrubs, herbs, or grasses? (PS: Was there something about an Oval Office address this week? I got distracted.) (scroll down for full article)


President Trump is in the midst of a “tinkle contest” (— thanks to House Speaker Nancy Pelosi) with Democrats in Congress over his partial government shutdown — the Trump Shutdown. He’s attempting to force them to cough up his southern border wall funding. I won’t stoop to Pelosi’s full ad hominem characterization of “a tinkle contest with a skunk.” Let’s just say Congress is in a grudge match with the most vile, egomaniacal confidence artist ever to befoul a television screen. No ad hominem. Just fact.

On Day 18 of the shutdown, Tuesday night, our president made his first prime-time Oval Office address to the American people. He knows he’s losing the war of public opinion surrounding his border wall and the shutdown (nearly two-thirds of Americans don’t want the wall). Apparently, someone on his staff said, “Hey, Mr. President, you’ve never done the serious prime-time thing. Let’s try that.”

So Donald used the Oval Office address — the solemn venue used by Presidents John F. Kennedy to warn America of the Cuban Missile Crisis, George W. Bush to address citizens after the 9/11 attacks, and Barack Obama to announce the neutralization of Osama bin Laden — to further his immigration con on the country. Pundits from both parties agreed Trump said nothing new, that the eight-minute teleprompted address could have been lifted from any one of his typically mendacious campaign speeches he’s given hundreds of times:

“The first misleading statement in President Trump’s Oval Office address Tuesday night came in the first sentence. Trump, addressing a national television audience from behind his desk, warned of a ‘security crisis at the southern border’ — even though the number of people caught trying to cross illegally is near 20-year lows.

“Another false claim came moments later, when Trump said border agents ‘encounter thousands of illegal immigrants trying to enter our country’ every day, though his administration puts the daily average for 2018 in the hundreds. … [H]e said 90 percent of the heroin in the United States comes across the border with Mexico, ignoring the fact that most of the drugs come through legal entry points and wouldn’t be stopped by the border wall. …

“Trump painted a misleading and bleak picture of the situation at the U.S.-Mexico border. He pumped up some numbers, exaggerated the public safety risks of immigration, and repeated false claims regarding how to fund a border wall. The appearance … underscored the extent to which Trump has relied on false and misleading claims to justify what has long been his signature political issue.”

To top things off, we know that Teleprompter Trump is way less fun than Wing-It Trump. The Donald was downright boring and clearly unpersuasive. In fact, in the wake of Tuesday night’s speech, Team Trump is dealing with increased GOP congressional defections — so far eight House and five Senate Republicans have sided with the Democrats to end the government shutdown now and negotiate the southern border wall later.


Russia Story No. 1 of the Week

“A Russian lawyer whose role in a 2016 meeting at Trump Tower has come under scrutiny from special counsel Robert S. Mueller III was charged Tuesday with obstructing justice in a separate money-laundering investigation. Natalia Veselnitskaya became a central figure in Mueller’s probe of Russian interference in the 2016 U.S. election when it was revealed that, in June of that year, she met with Donald Trump Jr. and other senior Trump campaign advisers after an intermediary indicated she had damaging information about Hillary Clinton.

“The indictment unsealed Tuesday relates to a different legal fight involving the Russian and U.S. governments and charges that Veselnitskaya made a ‘misleading declaration’ to the court in 2015, as part of a civil case arising from an investigation by federal prosecutors in Manhattan into suspected Russian money laundering and tax fraud. … While Veselnitskaya has long proclaimed she is innocent and not a representative of the Russian government, the indictment argues she has worked closely with senior Russian officials for years. Veselnitskaya … is unlikely to be brought to a U.S. courtroom.”

This is big. On June 9, 2016, Natalia Veselnitskaya met with then-Trump campaign chair Paul Manafort, Trump son-in-law Jared Kushner, and Trump top son Donald Trump Jr. at the now-infamous Trump Tower meeting. A few other Russians were there. The get-together was set up by a Russian, who had emailed Don Jr. a few days before:

“The June 3, 2016, email sent to Donald Trump Jr. could hardly have been more explicit: One of his father’s former Russian business partners had been contacted by a senior Russian government official and was offering to provide the Trump campaign with dirt on Hillary Clinton. The documents ‘would incriminate Hillary and her dealings with Russia and would be very useful to your father,’ read the email, written by a trusted intermediary, who added, ‘This is obviously very high level and sensitive information but is part of Russia and its government’s support for Mr. Trump.’

“If the future president’s eldest son was surprised or disturbed by the provenance of the promised material — or the notion that it was part of a continuing effort by the Russian government to aid his father’s campaign — he gave no indication. He replied within minutes: ‘If it’s what you say I love it especially later in the summer.’ Four days later, after a flurry of emails, the intermediary wrote back, proposing a meeting in New York on Thursday with a ‘Russian government attorney.’”

That “Russian government attorney” was Natalia Veselnitskaya. When the Times uncovered the meeting a year after it occurred, Donald Sr. crafted a media response under his son’s name stating the meeting had been about “Russian adoptions,” not dispersing damaging information about Hillary Clinton. Now we know it likely was about a quid pro quo: Russia produces dirt on Hillary for the Trump campaign in exchange for a future President Trump lifting American sanctions on Russia. We now know that Ms. Veselnitskaya was not just some private Russian lawyer but that she almost certainly worked with the Kremlin.

Russia Story No. 2 of the Week

“Donald Trump’s former campaign chairman Paul Manafort shared polling data on the 2016 election with a Russian man linked to Moscow’s intelligence agencies, according to special counsel Robert Mueller. Manafort, 69, is also accused of covering up other meetings and contacts with the Russian, an elusive consultant named Konstantin Kilimnik who worked for Manafort on election campaigns for pro-Kremlin politicians in Eastern Europe.

“Attorneys for Manafort disclosed the allegations in a court filing in Washington on Tuesday. They appeared in sections of the filing that were meant to be redacted, but where text underneath blacked-out lines could be copied and viewed. … Mueller, who is investigating Russia’s interference in the 2016 election and any coordination with Trump’s team, said in a court filing last year that the FBI assesses that Kilimnik ‘has ties to a Russian intelligence service and had such ties in 2016.’”

Pundit and legal expert heads practically exploded upon hearing this story. Most acknowledge that it is a very big deal. To be fair, it could be nothing. Paul Manafort simply could have been showing off for his Russian pal Konstantin Kilimnik. Or it could be a big, beautiful plume of hot white smoke pouring out of the Russia-gate gun muzzle.

But did the Trump campaign help the Russian government fine-tune their campaign? We know “the FBI assesses that Kilimnik ‘has ties to a Russian intelligence service and had such ties in 2016.’” We know that Kilimnik has ties to Russian oligarch Oleg Deripaska, who has close ties to Vladimir Putin. Do we believe that Manafort’s campaign polling pillow talk stopped at Kilimnik?

We know that, at least, the inadvertently unredacted redacted documents tell us Manafort instructed Kilimnik to pass the polling data on to Ukrainian oligarchs, who were cozy with the Kremlin.

One other important question: Did Paul Manafort’s information continue to flow to Kilimnik after he was ousted from Trump World? We know from court filings that Paul continued to have contact with the campaign after his canning.

The Manafort-Kilimnik connection clearly constitutes collusion. The Don Jr.-Veselnitskaya connection clearly constitutes collusion. Were the actions of Paul Manafort and Donald Trump Jr. part of an illegal conspiracy to steal the 2016 presidential election? Did Donald Sr. know about it? Did he sell out America to enrich himself?

Does a large brown furry mammal belonging to the family Ursidae (of the order Carnivora) defecate in a woodland area supporting an understory of shrubs, herbs, or grasses?

PS: Was there something about an Oval Office address this week? I got distracted. ■