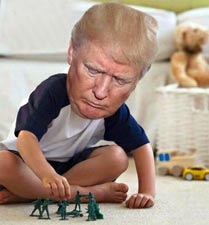 The Founding Fathers did not plan for a man-child president with a complete lack of empathy, propped up by a supporting political party of invertebrate, hypocritical sycophants. Oh, but the president has backbone. This man-child has the ability to stand up, hurl grade-school insults, and insist upon getting his own narcissistic way or he’ll blow up government, damn the rest of the country. A man with strong backbone but no empathy, foresight, or morality, however, is one dangerous animal, the likes of which we’ve never seen before (to use one of The Donald’s favorite lame superlatives). (scroll down for full article)


Political pundits often refer to the Founding Fathers and the issues that they did or didn’t plan for in the Constitution. Amazingly, some 230 years ago — before electricity, the Industrial Revolution, and the Digital Revolution — the governing principles they did address have so far mostly been timeless. The even grave mistakes they made, leaving slavery in place and not recognizing women’s rights, have been fixed because they wrote in mechanisms to correct them along with issues they couldn’t foresee. The amendment process and the Supreme Court, though not perfect, have allowed the U.S. Constitution and its interpretation to breathe and adapt with time, like a living thing — similar to the Bible.

What the Founding Fathers Missed

Jefferson, Hamilton, and the rest of them foresaw corrupt presidents, who could be removed through the impeachment process. In 1965, through the amendment process, the 89th Congress initiated the Twenty-Fifth Amendment, to enable the removal of an incapacitated president and elevate the vice president.

But the Founding Fathers, nor any congressional body or court since Benedict Arnold’s day, never foresaw a man-child occupying the highest office in the land.

Sure, eventually President Donald J. Trump’s corruption, criminality, and traitorous behavior might result in his impeachment, conviction, and removal from office. But that is not a given, no matter how blatant and numerous his offenses.

The Founding Fathers also did not foresee the existence of political parties. Though they were aware that political factions have often existed throughout even ancient democratic societies, they never envisioned the wholesale forfeiture of ethical standards by a group of legislative supporters propping up a corrupt, recreant president. Yes, I am referring to the Republican Party.

Many ethical Republicans — among those not 100 percent focused on their immediate viability and re-electability as politicians — have left the party. Steve Schmidt, Max Boot, Charlie Sykes, Nicolle Wallace, George Will, Jennifer Rubin, and scores of lesser known mayors, state legislators, and conservative pundits have determined they cannot be associated with a GOP that is the Party of Trump.

But that does not solve our problem of a man-child in the White House who governs with the foresight and temperament of a two-year-old, and with no impeachment conviction in sight.

To review, 37 days or so ago, Donald had agreed to a bipartisan bill that would have extended government funding with border security but without border wall funding. Senate Majority Leader Mitch McConnell (R-Ky.) shepherded that bill through the Senate. It passed overwhelmingly by voice vote. The lame-duck Republican House was on-deck to pass the bill, which would send it to the president for his promised signature. Shutdown averted.

Then ultra-right conservative pundits Rush Limbaugh, Ann Coulter, and others publicly accused Trump of caving in to Democrats — even though the Republican Senate passed the bill. Then Trump petulantly changed his mind for fear of losing his base (“Build the wall!”) support. He demanded that four times the original border funding be allocated, all to his wall, before he would sign any government-funding bill. And we’ve been here ever since.

The human toll is mounting, with 800,000 government workers furloughed or forced to work without pay. Granted, they are expected to get back pay, but in the meantime, families can’t buy food, bills are piling up, creditors are calling, and credit scores are dropping.

Additionally, consider the ripple effect on those contract workers and employees of businesses that depend on paid government workers to purchase their goods and services. Those people will not receive back pay.

The following entities (and employees and their families) are affected: 1) FBI (whose cutback operations coincidentally help the president by slowing or stopping myriad investigations into himself); 2) Coast Guard (the first military branch ever to lose funding during a shutdown, as a result of its incorporation into the DHS); 3) Department of Homeland Security (which is not currently securing the homeland); 4) FAA and its national air traffic control system (whose loss of funding and employee sick-outs are endangering air travel); 5) HUD (which deals with housing and rental supplements); 6) Department of Agriculture (which administers food stamps); 7) U.S. judicial system; 8) national parks; 9) FDA (which currently can’t properly inspect food and drugs); and 10) many others.

Farmers are losing money and their businesses are jeopardized because government representatives aren’t available to process and grant routine seasonal loans. Transportation Security Administration workers are staging sick-outs, staying off the job at airports and elsewhere to protest missing paychecks. National Federation of Federal Employees union members are staging sit-ins outside of select senators’ offices. Government scientists are doing Uber shifts. Administrative professionals are applying at temp agencies, though they’re not being hired because they’re considered “too temporary.” FBI agents and air traffic controllers are seeking out food pantries.

Play the home game to see who else is affected and what other services are cut back or shuttered.

Add to all of this the shutdown’s effect on the economy, which is projected to produce a loss of 0.1-plus percent of GDP each week it persists. With this, on top of Trump’s tariff folly, stock market uncertainty and volatility, and mistreatment of allies, some economists are warning of possible recession later this year.

Polls are showing people blame Trump for the shutdown by about two to one, especially since he proclaimed in December that he would “proudly own the shutdown” and he “wouldn’t blame Democrats” for it.

Democrats’ primary argument for not giving in is to prevent Mr. Trump from shutting down, or threatening to shut down, the government whenever he doesn’t get his way in the future, like a petulant two-year-old — or man-child, if you will. Democrats maintain that if they yield to him over this, they will never be able to hold him to reasonable negotiating tactics down the road, that he will always be a threat to open government. They are insisting the president agree to reopen government first, then negotiations can proceed.

This is an ironclad argument, if I do say so myself (being a Democrat and all).

But here’s the problem: a man-child has no empathy, no ability to see the world and others’ pain past his own selfish interests. Some Republican legislators might have some empathy left, but they are repressing it because breaking with the president could mean political suicide. They’re deathly afraid of being primary-ed in their next election, i.e., losing to a GOP primary opponent because they have not been Trumpy enough.

Democrats do have empathy. Empathy is the steel frame upon which their party platform is built. Democrats feel the pain of the 800,000 federal workers, and those private workers caught up in the ripple effects. But if they let Trump get away with his man-child behavior and terrible-twos temper tantrum, he will be emboldened to do it again.

What to do? Might Pelosi and Democrats have to give in to Trump’s vanity wall because we have a crazy president? It’s a real test of empathy versus inanity and insanity.

The Founding Fathers did not plan for a man-child president with a complete lack of empathy, propped up by a supporting political party of invertebrate, hypocritical sycophants. I like that word invertebrate. It is a perfect metaphor to describe spineless Republican legislators, the utter weaklings who can’t stand up for what’s right. Oh, but the president has backbone. He has the ability to stand up, hurl grade-school insults, and insist upon getting his own narcissistic way or he’ll blow up government, damn the rest of the country.

A man with strong backbone but no empathy, foresight, or morality, however, is one dangerous animal, the likes of which we’ve never seen before (to use one of The Donald’s favorite lame superlatives).

Congress passed the Twenty-Fifth Amendment in the years succeeding President John F. Kennedy’s assassination. For a short time, it looked like the president might live but be unable to function. Congress decided there needed to be a legal mechanism for removing a president if he or she were incapacitated. You might also remember that his Cabinet thought Harrison Ford’s President James Marshall might have been killed or mortally injured in the 1997 movie Air Force One, and Vice President Glenn Close was presented with Twenty-Fifth Amendment documentation to sign or not sign. The 89th Congress likely also remembered the story of President Woodrow Wilson, who apparently slipped into incapacitation late in his presidency while his wife secretly took over his schedule and decision-making.

In the wake of President Trump’s impeachment conviction or resignation, Congress needs to pass the Man-Child Amendment. Everyone and their brother, including Donald, expected Trump to lose, so no one was too worried about a corrupt, amoral, criminal man-child occupying the White House. No one thought it could happen.

We need that amendment. ■