New Zealand Needed Humanity — Trump Has None to Give 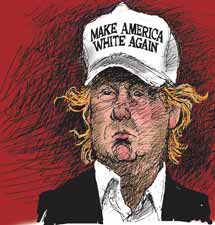 Prime Minister Jacinda Ardern told the American president that if he wanted to best support New Zealand during this time of tragedy, she urged him to express “sympathy and love for all Muslim communities.” In a classic Trumpian say-what-you-gotta-say-in-the-moment response, to get the prime minister off the phone, Donald agreed to do it. But I guess he forgot about his throwaway line, “Whatever they need. We will be there.” Trump couldn’t do it. He couldn’t even fake it. New Zealand needed humanity. Donald has none to give. (scroll down for full article)


At 1:45 p.m. last Friday, a 28-year-old Australian white supremacist with a semiautomatic rifle entered Masjid al Noor mosque in the city of Christchurch, New Zealand. He murdered 41 worshippers within a few minutes. Shortly before or after, the gunman approached nearby Linwood Masjid Mosque and murdered seven people. Another victim died at Christchurch Hospital. The morning of the carnage, the terrorist had posted a 74-page anti-immigrant manifesto to his social media account. He identified himself as a disciple of the world’s most notorious white supremacist killers, mentioning them by name.

“A video that was apparently livestreamed by the shooter shows the attack in horrifying detail. The gunman spends more than two minutes inside the mosque spraying terrified worshipers with bullets again and again, sometimes re-firing at people he has already cut down. He then walks outside to the street, where he shoots at people on the sidewalk. Children’s screams can be heard in the distance as he returns to his car to get another rifle.

“The gunman then walks back into the mosque, where there are at least two dozen people lying on the ground. After walking back outside and shooting a woman there, he gets back in his car, where the song ‘Fire’ by English rock band ‘The Crazy World of Arthur Brown’ can be heard blasting from the speakers. The singer bellows, ‘I am the god of hellfire!’ and the gunman drives away. The video then cuts out.”

“Earlier today, I spoke with Prime Minister Jacinda Ardern to express the sorrow of our entire nation following the monstrous terror acts at two mosques. … I told the prime minister that the United States is with them all the way, 100 percent — whatever they need. We will be there. New Zealand has been a great friend and partner for many years. Our relationship has never been better and what they’re going through is absolutely terrible. Our hearts are with them and whatever we can do.”

Prime Minister Ardern thanked the American president and told him that if he wanted to best support New Zealand during this time of tragedy, she urged him to express “sympathy and love for all Muslim communities.”

In a classic Trumpian say-what-you-gotta-say-in-the-moment response, to get the prime minister off the phone, Donald acknowledged that her suggestion would be helpful, and he agreed to do it.

It’s been six days since Trump’s phone call to Ardern, and he has yet to express support for Muslims. I guess he forgot about his throwaway line, “I told the prime minister that the United States is with them all the way, 100 percent — whatever they need. We will be there.” Prime Minister Ardern told him what “they need” is for the president of the United States to say his government has “sympathy and love for all Muslim communities.”

What New Zealand needed was humanity. Donald has none to give.

“And then, Friday afternoon [the day of the massacre], it got worse. Responding to a question by an ABC reporter about whether he believed there was a growing threat of white nationalism worldwide, Trump responded, ‘I don’t really,’ adding, ‘I think it’s a small group of people that have very, very serious problems. [I don’t know enough about it yet.]’

“Our own ears and eyes (as well as statistics) tell us that’s a lie. Again, this reaction is because Trump gets his base better than anyone. Of course, this is the same Trump who hammered Hillary Clinton during the 2016 campaign for not saying the phrase, ‘radical Islamic Terrorism.’ As Trump declared then, ‘Now, to solve a problem, you have to be able to state what the problem is or at least say the name. She won’t say the name.’ …

In Trump’s mind, if you’re a non-white who kills white people, you’re a terrorist. But if you’re a white person killing Muslims, Sikhs, African-Americans, or any other non-Caucasians, you’re mentally ill — from “a small group of people that have very, very serious problems.”

Cold, hard stats tell us white supremacist terrorism and resulting deaths clearly are on the rise.

In a blast from the Nixonian past, acting White House Chief of Staff Mick Mulvaney defended Mr. Trump on the Sunday morning news shows: “The president is not a white supremacist. I’m not sure how many times we have to say that.”

To paraphrase an Alcoholics Anonymous cliché-that’s-a-cliché-because-it’s-true, “Once is too many, and a thousand times is not enough.”

Mick went on to say, “I don’t think anybody could say that the president is anti-Muslim.”

The Late Show’s Stephen Colbert responded for all of America in his Monday night monologue, “The president is anti-Muslim.” Mick, we have eyes and ears.

“[While those interviews were] being aired, the president posted on Twitter a vociferous defense of Jeanine Pirro, a conservative Fox News host who was condemned by her network after she questioned whether the first allegiance of Rep. Ilhan Omar — a Minnesota Democrat who is one of three Muslim lawmakers in the House of Representatives — was to Islamic law or the U.S. Constitution. On Saturday night, Pirro did not appear in her usual weekend time slot on Fox.

“On Sunday morning, Trump, in Twitter posts, urged viewers to rally around Pirro and another Fox host, Tucker Carlson, who has been under fire after old audio emerged of Carlson calling Iraqis ‘primitive monkeys’ and also making lewd remarks about teenage beauty contestants. ‘Keep fighting for Tucker, and fight hard’ for Pirro, the president exhorted his Twitter followers. ‘Your competitors are jealous.’”

Ladies and gentlemen of the jury, even President Richard M. Nixon took the initiative to defend himself from charges of criminality arising from the Watergate affair. On November 17, 1973, he went on national television and famously declared, “People have got to know whether or not their president is a crook. Well, I’m not a crook. I’ve earned everything I’ve got.”

I don’t know. Maybe Trump learned from Nixon. I mean, if you have to declare you’re “not a crook,” you probably are. If your chief of staff has to declare, “The president is not a white supremacist,” he probably is. But the Trump White House has decided it’s better not to have the president, himself, draw attention to that fact.

“[The New Zealand terrorist’s] clothes and weapons were also carefully curated. He wore a patch with an emblem used by numerous neo-Nazi groups across the world, including in Australia. Scrawled on his rifle was a white nationalist credo popularized by the American domestic terrorist and neo-Nazi David Lane. On his flak jacket was a symbol commonly used by the Azov Battalion, a Ukrainian neo-Nazi paramilitary organization. …

“Mr. Trump, who condemned the attacks, has frequently made racist remarks, enacted policies against immigrants and Muslims, and courted white nationalists, whom he has said include ‘some very fine people.’”

But Mr. White Supremacist Terrorist, to be fair to Donald, he is hamstrung by a suffocating American constitution and representative democracy. He’s hog-tied by the United States’ pesky rule of law and silly civil rights. Just think what he could accomplish without those humanitarian encumbrances on his leadership and policymaking.

Anyway, top White House adviser Kellyanne Conway put it all into perspective during her defense of the boss: President Trump’s name only turned up in the manifesto one measly time.

“[The shooter] put out a 70-page manifesto, and I guess everybody scoured it, searched for Donald Trump’s name, and there it is, one time.”