Adam Schiff Says It All 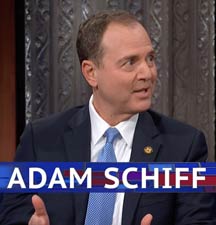 
It’s been almost two weeks since Special Counsel Robert Mueller submitted his report to the Justice Department on the investigation surrounding Russian interference into the 2016 U.S. election and possible cooperation by anyone in the Trump campaign.

1) “The Special Counsel’s investigation did not find that the Trump campaign or anyone associated with it conspired or coordinated with Russia in its efforts to influence the 2016 U.S. presidential election.”

2) “The Special Counsel’s investigation determined that there were two main Russian efforts to influence the 2016 election.”

Though Sarah and Donald’s tweets and related public statements were blatant lies, the total-exoneration narrative largely had been cemented. This was so despite lingering doubts surrounding an absent Mueller report and statements in Attorney General Barr’s letter.

At the next House Intelligence Committee meeting March 28, 2019, the GOP contingent fiercely perpetuated the total-exoneration line. All nine Republican committee members signed a letter calling for the resignation of Chairman Adam Schiff (D-Calif.). They had Rep. Mike Conaway (R-Texas) introduce the letter and read it aloud. Here is the gist of it:

“Your willingness to continue to promote a demonstrably false narrative is alarming. The findings of the special counsel conclusively refute your past and present exertions, and have exposed you of having abused your position to knowingly promote false information. Your actions both past and present are incompatible with your duty as chairman of this committee. As such, we have no faith in your ability to discharge your duties in a manner consistent with your constitutional responsibility, and urge your immediate resignation as chairman of the committee.”

Earlier in the week, House Minority Leader Kevin McCarthy (R-Calif.), counselor to the president Kellyanne Conway, President Trump, and numerous other GOP luminaries and legislators also had called on Chairman Schiff to resign for saying things publicly such as that there was “more than circumstantial” evidence of conspiracy/collusion between the Trump campaign and Russian operatives to influence the 2016 election.

In an immediately famous response to calls for his resignation, Adam Schiff forcefully outlined the case against Trumpian bad behavior — criminal or not — and Republican complicity. Because it is so important and comprehensive, I reprise the chairman’s response in its entirety.

My colleagues may think it’s OK that the Russians offered dirt on the Democratic candidate for president as part of what was described as the Russian government’s effort to help the Trump campaign. You might think that’s OK. My colleagues might think it’s OK that when that was offered to the son of the president, who had a pivotal role in the campaign, that the president’s son did not call the FBI, he did not adamantly refuse that foreign help — no, instead that son said he would “love” the help of the Russians.

You might think that it’s OK that the president’s son-in-law sought to establish a secret back channel of communication with the Russians through a Russian diplomatic facility. I don’t think that’s OK.

You might think it’s OK that an associate of the president made direct contact with the GRU through Guccifer 2[.0] and WikiLeaks, that is considered a hostile intelligence agency. You might think that it’s OK a senior campaign official was instructed to reach that associate and find out what that hostile intelligence agency had to say, in terms of dirt on his opponent.

Now, I have always said that the question of whether this amounts to proof of conspiracy was another matter. Whether the special counsel could prove beyond a reasonable doubt the proof of that crime would be up to the special counsel and I would accept his decision, and I do. He is a good and honorable man and he is a good prosecutor.

I don’t think it’s OK that his attorney lied to our committee. There is a different word for that than collusion and it’s called compromise. And that’s the subject of our hearing today.

The next day, March 29, Mr. Barr wrote another letter to Congress. In it, he “clarified” his “summary”:

“I am aware of some media reports and other public statements mischaracterizing my March 24, 2019 supplemental notification as a ‘summary’ of the Special Counsel’s investigation and report. … My March 24 letter was not, and did not purport to be, an exhaustive recounting. … My notification to Congress and the public provided … a summary of its ‘principal conclusions’ — that is, its bottom line. … Everyone will soon be able to read it on their own.”

The reality of a 2018 blue wave took several weeks after that midterm election to become clear. Conversely, Team Trump’s initial “total exoneration” narrative is getting foggier by the day. The lie has taken less than two weeks to begin yielding to clarity.

William Barr’s attempt to clarify is seen widely as his realization that his “summary of principal conclusions” vastly oversold Trump’s absence of culpability and bad behavior, which will become painfully apparent when the full Mueller report comes out.

As reality has set in, the president has become extremely nervous. After feigning support over the past month for a full, public Mueller report release, Donald is now so worried that he has walked that back, despite the negative optics:

“President Donald Trump appeared to backpedal on Tuesday from his initial desire for special counsel Robert Mueller’s report to be released to Congress and the public, a sharp diversion from his enthusiastic calls for the release of the highly anticipated report. In a series of tweets, Trump disparaged congressional Democrats for their efforts to obtain the full report. … [A]s Democrats in Congress have escalated their efforts to obtain Mueller’s report and evidence, the president is now indicating he has reservations about allowing his Justice Department to fork over the full report to lawmakers. ‘There is no amount of testimony or document production that can satisfy Jerry Nadler or Shifty Adam Schiff,’ Trump tweeted Tuesday morning, naming two top House Democrats seeking the report. ‘It is now time to focus exclusively on properly running our great Country!’”

Many other GOP politicians and self-appointed spokespersons also are now averring there is no longer any need to see the full Mueller report. This comes in spite of a 420-to-0 vote in the House just two weeks ago (including 190-some Republicans) in favor of requesting the public release of the report.

Trump is flailing far more than usual (which says a lot), under the pressure of an imminent damaging Mueller report. Republicans won’t admit it publicly, but they are just as worried about the president’s mental health as most other Americans who are paying attention.

Congress had given Attorney General William Barr a deadline of April 2, 2019, to turn over the special counsel’s report. In his third (March 29) letter to the House Judiciary Committee, Bill Barr committed to turn over a redacted version by “mid-April.” On Tuesday, Barr missed the congressional deadline. On Wednesday, the committee voted to authorize a subpoena for the full, unredacted report, along with all underlying evidence.

Also breaking yesterday, late last night, were the first-ever leaks of information from the special counsel’s staff of 19 lawyers, 40-or-so FBI agents, and other members. Throughout Team Mueller’s 22-month probe of Russian election interference, until it officially closed March 22, 2019, there have been zero leaks from that office. But apparently, some of Mueller’s people are not happy with the way Attorney General Barr has slanted his summary, inaccurately favored Trump, and created a false narrative of presidential exoneration:

“Members of Mueller’s team have complained to close associates that the evidence they gathered on obstruction was alarming and significant. ‘It was much more acute than Barr suggested’ [said one official] … Some members of the office were particularly disappointed that Barr did not release summary information the special counsel team had prepared. … ‘There was immediate displeasure from the team when they saw how the attorney general had characterized their work instead,’ according to one U.S. official briefed on the matter.

“Summaries were prepared for different sections of the report, with a view that they could be made public, the official said. The report was prepared ‘so that the front matter from each section could have been released immediately — or very quickly,’ the official said. ‘It was done in a way that minimum redactions, if any, would have been necessary, and the work would have spoken for itself.’ Mueller’s team assumed the information was going to be made available to the public, the official said, ‘and so they prepared their summaries to be shared in their own words — and not in the attorney general’s summary of their work, as turned out to be the case.’ …

“Some members of Mueller’s team appear caught off guard by how thoroughly the president has used Barr’s letter to claim total victory, as the limited information about their work has been weaponized in the country’s highly polarized political environment. … Their frustrations come as polls show many Americans have already drawn conclusions about the special counsel findings — even though only a handful of words from the report have so far been released.”

If only Donald ever had had any real intention to “focus exclusively on properly running our great Country!” Since he’s incompetent, incapable, unprincipled, and unwilling, Democrats like Adam Schiff must fill the void. ■