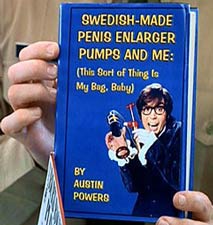 When Donald Trump said WikiLeaks is “not my deal in life,” every thinking person who consumes news in America immediately thought of Mike Myers’ spy character in his famous (and cerebral) cinematic trilogy about hapless, sex-crazed, James-Bond-caricaturizing Austin Powers. We all instantly flashed to the scene in “Austin Powers: International Man of Mystery” during which Powers had just been unfrozen by Britain’s intelligence agency after several decades of frigid suspended animation. Austin and the beautiful Vanessa were reclaiming Austin’s possessions, in repository for 30 years, from the clerk reading off the inventory of belongings. [QUARTERMASTER CLERK]: “One Swedish-made penis enlarger.” [AUSTIN POWERS]: “I don’t even know what this is! This sort of thing ain’t my bag, baby.” (scroll down for full article)


“It’s a pathology of this presidency that continues to go under-examined: Donald Trump simply does not recognize that his role as president confers on him any institutional obligation toward the American people of any kind.

“This is the through line that runs through the biggest stories of the moment: Trump’s demonization of Rep. Ilhan Omar [(D-Minn.)]; his unhinged policies and lawlessness toward the humanitarian crisis at the border; and his effort to prevent the voters from gaining a full accounting of his finances, and, by extension, of his corruption.”

Who is Greg Sargent? He’s a member of the lobbying organization that works for Jeff Bezos and Amazon. You know. The Washington Post. At least that’s the tweet-accusation Trump has made numerous times because Amazon founder Bezos now also owns the Post. He saved it from bankruptcy in 2013, around the time many print publications began suffering financially from the shift to digital media. Mr. Bezos has been a strictly hands-off owner, leaving the paper’s news and opinion divisions to run as they always have.

But Jeff Bezos has become one of Trump’s bogeymen because 1) Donald must blame someone for the Post’s accurate (which necessarily means negative) coverage of his presidency, 2) Jeff is 10 to 50 times richer than Donald (depending upon comparison with the president’s stated worth vs. his actual worth), which gnaws at one of Trump’s primary self-esteem vulnerabilities, and 3) Jeff is a wealthy celebrity totally secure in his baldness, whereas Donald is known worldwide for his buffoonish chrome-dome-covering comb-over.

for his buffoonish chrome-dome-covering comb-over.

I opened up with this quote from the Post’s Greg Sargent to cleanse the palate. Since consuming Trump-related news is like drinking from a firehose (— thanks to Don Lemon, CNN), sometimes we need to dry off and consider the big picture.

The biggest story of this week is the Thursday release of Attorney General William Barr’s redacted version of the special counsel’s report on the Trump-Russia investigation. The problem is that the original report is approximately 400 pages long, and it’s not being released until about noon today. It will take analysts and pundits a day or two to sort out what’s in there. Film at 11. I will have a thorough reporting on this story next week.

What we can say is that Attorney General Barr has blown through any possible goodwill and air of independence he might have had in the eyes of Congress and fair-minded Americans. His handling of the Mueller report has solidified his unethical, obsequious loyalty to President Trump.

Barr was criticized vehemently for his March 24 “summary” of Special Counsel Robert Mueller’s “principal conclusions.” He delivered his own conclusions, which were seen immediately as inherently biased in favor of the president. This allowed Trump to set the false tweet-narrative of “No Collusion, No Obstruction, Complete and Total EXONERATION!”

Then we found out, in the first-ever leaks from members of Mueller’s team, that they were upset about this false narrative. The leaks also revealed that Team Mueller had composed their own summaries, for several primary sections of the report, that were suitable for public release, that is, cleansed of any sensitive information. Bill Barr, however, declined to release the Mueller summaries.

Then we saw Barr tell a Senate committee last week that, “I think spying did occur, yes, I think spying [on the Trump campaign] did occur.” What he meant was that counterintelligence surveillance took place due to myriad suspicious contacts between Russian operatives and Trump campaign officials. It was Republicans in the FBI and Trump-appointed Republicans at the DOJ who initiated this investigation. But Barr’s loose use of the word spying, with no qualification, once again furthered an administration false narrative (and in this case, a thoroughly debunked Trump conspiracy theory) — that political enemies illegally spied upon the Trump campaign for nefarious reasons.

Last night we found out two additional shocking developments. First, the Department of Justice has been briefing White House lawyers on the Mueller report for the past several days. Though apparently not illegal, this flies in the face of DOJ rules and policies, the traditional separation of the Justice Department and the White House, and precedent as old as our country. Clearly, this pre-briefing of Donald’s legal team has allowed them to prepare fully spun media responses to the imminent bad news, and further control their false narrative.

Finally, earlier this week, AG Barr announced he would release a redacted Mueller report “Thursday morning.” Then Wednesday evening, the DOJ clarified (actually, Trump let it slip in a radio interview) that Barr would be holding a press conference at 9:30 a.m., Thursday, to discuss the report. But he would not be releasing the Mueller report itself to Congress and the public until “between 11 a.m. and noon.” House Democrats’ (and fair-minded pundits’) heads exploded over this one. Never before has this been done. Five House committee chairs demanded that Barr cancel his press conference and simply release the report.

This gambit was recognized immediately as a colossally transparent attempt to further further the false narrative that President Trump has been exonerated, knowing the report will show otherwise. Their plan has been consistent: falsely characterize the report, delay it as long as possible, let it out it in dribs and drabs — ultimately releasing it while Congress is in Easter recess — and hope the American people lose interest in trying to keep up with the truth.

Another important story of the past week is the April 11 eviction of WikiLeaks founder Julian Assange from the Ecuadorian embassy in London. He had been holed up there under political asylum for about seven years, avoiding criminal arrest warrants from Sweden and the United States. But Ecuador recently underwent a leadership change; the new guy is less sympathetic to Assange’s scofflaw attitude. Besides that, Assange was a slob who never cleaned up his embassy apartment.

So Ecuadorian officials invited London bobbies in to drag Julian out of the embassy and into custody. He’s expected to be extradited to the U.S. for likely espionage and illegal hacking charges, though legal fights could delay this.

Assange founded WikiLeaks in 2006. Since then it has become famous as the publisher of millions of secret documents from various governments, including those stolen from America by CIA contractor Edward Snowden and U.S. Army intelligence analyst Chelsea Manning. In 2016, WikiLeaks released tens of thousands of hacked Hillary Clinton and Democratic National Committee emails (beginning an hour after the unrelated release of Donald Trump’s infamous Access Hollywood video in which he was surreptitiously recorded bragging about sexually assaulting women and getting away with it). These WikiLeaks email dumps are credited with helping Trump win the presidency, if not outright ensuring his win.

WikiLeaks observers are of two minds: 1) It’s a journalistic organization blowing the whistle on nefarious government secrets; or 2) It’s a lawless propaganda outlet for Russia, as supported by the fact that it never embarrasses that country with document releases even though it possesses plenty of material to do so. Also note that Russia has given Mr. Snowden asylum, protection from the American judicial system, since 2013.

Donald Trump used to love WikiLeaks. Deeper thinkers — even in the Trump administration — believe Julian Assange is a danger to democracy and guilty of espionage. The latter are eager to have Assange extradited to the U.S. as soon as possible after his London arrest. As mentioned, the extradition process is in progress.

Trump and WikiLeaks — Then

Here’s a look at Donald’s thinking on Assange and WikiLeaks when they were helping him win the 2016 presidential election:

“An NBC News analysis found that Trump mentioned WikiLeaks more than 140 times in the final month of the campaign after the group published emails stolen from the Democrats by Russian hackers.”

“We have all of these new charges [against Hillary Clinton]. Did you see it just came down today? WikiLeaks, some new stuff, some brutal stuff.” [10/10/2016]

“It’s just the latest evidence of the hatred that the Clinton campaign really has for everyday Americans and you see, and you see so much from these WikiLeaks. You see so much. There’s so much.” [10/11/2016]

Now that Julian Assange has been arrested and faces extradition to the U.S. for espionage, White House press secretary Sarah Sanders says this:

“Clearly the president was making a joke during the 2016 campaign [about loving WikiLeaks].”

Now that Julian Assange has been arrested and faces extradition to the U.S. for espionage, the president was asked if he “still loved WikiLeaks”:

“It’s not my thing. I know there is something having to do with Julian Assange. I’ve been seeing what’s happened with Assange and that will be a determination, I would imagine, mostly by the attorney general, who’s doing an excellent job. So, he’ll be making a determination. I know nothing really about him.”

Mr. Trump wrapped up his remarks to reporters in the Oval Office last Thursday by saying, “I don’t even know what this is! This sort of thing ain’t my bag, baby” (— writer’s embellishment).

When Donald said WikiLeaks is “not my deal in life,” every thinking person who consumes news in America immediately thought of Mike Myers’ spy character in his famous (and cerebral) cinematic trilogy about hapless, sex-crazed, James-Bond-caricaturizing Austin Powers. We all instantly flashed to the scene in the first installment, Austin Powers: International Man of Mystery, during which Austin had just been unfrozen by Britain’s intelligence agency after several decades of frigid, hibernatious sleep.

Austin was revived from suspended animation to combat supervillain Dr. Evil’s latest threat to humanity. Our superspy had been deep-frozen by his government in the 1960s for reasons unclear. Upon awakening, Powers was anxious to impress the beautiful Vanessa Kensington (Elizabeth Hurley), his new spy partner who was accompanying him post-defrost to help him acclimate to the ‘90s. Their next stop was reclaiming Austin’s possessions, in repository for 30 years, from the storage manager — the Quartermaster Clerk — who fastidiously remitted his belongings back to Powers according to a detailed inventory:

[AUSTIN POWERS]: “I don’t even know what this is! This sort of thing ain’t my bag, baby.”

[QUARTERMASTER CLERK]: “One book, Swedish-Made Penis Enlarger Pumps and Me: (This Sort of Thing Is My Bag Baby), by Austin Powers.”

Does this not remind you of The Donald?

Mike Myers must do a parody film of Donald Trump’s life. He’s already halfway there.

“WikiLeaks, I love WikiLeaks. And I said write a couple of them down. Let’s see. During a speech crooked Hillary Clinton, oh she’s crooked folks. She’s crooked as a three-dollar bill. Okay here’s one. Just came out. ‘Lock her up’ is right.”