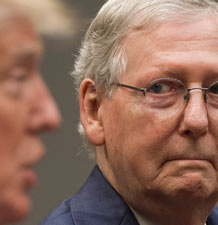 There are many Republican Anti-Trumpers. Unfortunately, none of those currently are serving in the U.S. legislature. I keep an ongoing list, which grows weekly. Some entries are Never-Trumpers, those who can boast they never supported the president and never will. Then there are the Anti-Trumpers who supported Donald in 2016 but decided later that he’s no longer fit for office. To those brave souls, who were willing to endure the derisive grade school nicknames and tweet-hominem attacks, you have my deepest respect. So what’s it take for Republicans to start questioning their support? What finally drives the “Anti-Trump Curious” to explore their conscience, to reevaluate their values? If it’s a final (camel’s back) straw scenario, what is the last dry coarse stem of a cereal grass (— thanks to Merriam-Webster) that puts any given Republican over the edge? (scroll down for full article)

(Trump, Donald, R-N.Y., U.S. president; campaign rally; Manchester, N.H.; 8/15/2019.) (referring to a supporter in the stands that Trump erroneously thought was a protester)

What’s next? Donald dissing some guy for a really bad hair comb-over?

There are many Republican Anti-Trumpers, more than the Grand Old Party cares to think about. Unfortunately, none of those currently are serving in the U.S. legislature — unless you count Rep. Justin Amash (I-MI), who recently left the party after no longer feeling welcome. I keep an ongoing list of the others, which grows weekly. Some entries are Never-Trumpers, those who can boast they never supported the president, going back to the 2016 Republican presidential primaries, and never will. My friends, I salute you.

Then there are the Anti-Trumpers who supported Donald in 2016 but decided at some point that he is not (or no longer) fit for the office of president. To those brave souls, who were willing to endure the derisive grade school nicknames and tweet-hominem attacks, you have my deepest respect.

So what’s it take for Republican voters or legislators to start questioning their support for the president? What finally drives the Anti-Trump Curious to explore their conscience, to reevaluate their values? If it’s a final (camel’s back) straw scenario, what is the last dry coarse stem of a cereal grass (— thanks to Merriam-Webster) that puts any given Republican over the edge, to recant their support of Donald Trump?


Joe Walsh (not of the Eagles)

Joe Walsh (R-Ill.) is a one-term tea-party-wave former U.S. House member (2011-2013) and firebrand conservative radio talk show host who supported The Donald’s presidential aspirations in 2016. Many would say, however, that he became Anti-Trump Curious shortly after the inauguration. While supporting most of Trump’s policies, Walsh was critical of his Cabinet picks and other administration decisions. Later Joe was one of the few Republicans who expressed support for Robert Mueller and his Special Counsel investigation.

The last straw for Walsh was the president’s statements and behavior at the Helsinki, Finland, summit with Russian President Vladimir Putin July 16, 2018. I memorialized Trump’s comments in my article “Hinky in Helsinki”:

(Trump, Donald, R-N.Y., 2016 presidential candidate; 3rd presidential debate; Thomas and Mack Center, University of Nevada, Las Vegas; 10/19/2016.) (after Trump said Putin has no respect for her, Hillary Clinton responded, “Well, that’s because he’d rather have a puppet as president of the United States,” prompting Trump’s response above)

“My people came to me — [DNI] Dan Coats came to me and some others — and they said they think it’s Russia. I have President Putin — he just said it’s not Russia. I will say this: I don’t see any reason why it would be [Russia]. …

“I will tell you that President Putin was extremely strong and powerful in his denial today. …

“If [Putin had compromising material on me], it would have been out long ago. … [Mueller’s investigation is] a total witch hunt. …

“Actually, I called [Mr. Putin] a competitor, and a good competitor he is. And I think the word competitor is a compliment. …

“I think that the [Special Counsel’s] probe is a disaster for our country. I think it’s kept [America and Russia] apart, it’s kept us separated. …

“And what [President Putin] did do is an incredible offer: he offered to have [Special Counsel Robert Mueller’s] people working on the case come and work with their investigators with respect to the 12 [indicted Russians, in exchange for questioning our former U.S. ambassador to Russia and 10 other Americans]. I think that’s an incredible offer.”

Who’s your puppet (and your daddy)?

The world — including United States Democrats, Republicans, and anyone else who has at least a passing concern about government — was flabbergasted by Donald Trump’s blatant, obsequious pandering to Vladimir Putin in Helsinki. By almost all accounts, Trump looked weak and timid next to the Russian strongman. Many on both sides in Congress believed Trump was exuding the suspicious — some might say hinky — air of a person compromised by Putin, of someone beholden to an enemy of America for some unknown reason.

For Rep. Joe Walsh (R-Ill.), President Trump’s betrayal of America was more than he could take:

“[Trump] speaks more favorably of Putin. TRUMP WON’T STAND WITH HIS OWN COUNTRY. That’s it. That should be the final straw. It is for me. … Trump was a traitor today. I cannot & will not support a traitor. No decent American should.”

Walsh has remained true to his word. He recently, again has called for Republican presidential primary challengers to step up, even considering a run himself.

“The Mooch,” according to Wikipedia, “is an American financier, entrepreneur, and political consultant who briefly served as the White House director of communications from July 21 to July 31, 2017.”

He supported Democrats until approximately 2010. In 2012 he was hired as the national finance co-chair for Mitt Romney’s presidential campaign. Through 2016 Anthony Scaramucci continued to support Republicans but also offered occasional criticism of Trump.

In mid-2016 after Scaramucci’s first and second Republican presidential primary choices (Scott Walker and Jeb Bush) dropped out of the GOP primary, The Mooch joined Trump World. He served in various capacities during the campaign and transition. And, of course, he’s notorious for his bizarre 11-day stint as the White House communications director in July 2017. Donald fired him (via Chief of Staff John Kelly) ostensibly for a profanity-laced interview with a reporter from The New Yorker. Anthony thought his comments were off the record. They weren’t.

But anyone who knows The Donald knows that Scaramucci was axed because he was getting more TV face time than the boss.

Even though Trump canned him in 2017, Mr. Scaramucci consistently has continued to make the cable news rounds in support of his president. Until now.

Scaramucci became Anti-Trump Curious a month or so ago. While apparently still supporting the administration, he publicly scolded Trump for the racially charged remarks (“Go back where you came from”) against the four first-term congresswomen of color known as The Squad, saying the president was risking a large segment of his support.

But it appears that what finally put Scaramucci over the cliff — the last straw — was Trump’s disgusting, embarrassing, narcissistic performance during his early August visits to El Paso, Texas, and Dayton, Ohio, the scenes of back-to-back mass shootings that left 31 people dead. Indeed, the president was widely panned for his visits to “comfort” survivors and “bring the country together.” Donald made the visits and accompanying press statements all about himself and his grievances against critics.

A Plea to the Potentially Anti-Trump Curious

“Tuesday turned out to be a busy day for President Trump. He poked another U.S. ally in the eye, questioned the loyalty of American Jews, backpedaled on gun legislation, and undercut the denials of his advisers on the economy. It was just another normal day in the Trump administration.

“Take Tuesday’s quartet case collectively, and it portrays an administration and White House in chaos, lacking in systematic policymaking. It portrays a president who changes his mind whenever it suits him, whose statements shift with the moment, and who uses words carelessly and sometimes destructively. It forms a pattern of dissembling, of deliberate or unknowing falsehoods as well as efforts to divide already divided Americans from one another.

“Adding to the chaos and confusion, the president went at it all again Wednesday with another lengthy press availability. He took back some of what he said Tuesday and reinforced other things, leaving observers — no doubt including his own advisers — to wonder what and how he thinks about the issues before him.”

In the past few weeks, President Trump has been setting a new low for erratic, prevaricacious, inept, and inane behavior. Some pundits believe he’s desperate, terrified of signs of an economic downturn, which would quash his only, fleeting hope to pull out a reelection victory. Desperate or not, we also know from empirical evidence that there is no bottom to Donald’s capacity for dishonesty, depravity, and ineptitude — he can always go lower.

So what will it take for the Mitch McConnells and the Kevin McCarthys of the Senate and House? If you’ve been paying attention at all, you know Trump’s list of egregious language, actions, and policies is endless. No one can remember them all. But just remember the brimming categories of the Big 3: corruption, amorality, and incompetence. Anyone else guilty of his offenses couldn’t get elected dogcatcher, as the saying goes. I don’t think Donald could get elected dogcatcher now. But congressional Republicans stick with him in cult-like subservience — even though they never would want their son to grow up to be like him.

“President Trump on Wednesday said that the new prime minister of Denmark was ‘nasty’ to him when she rejected his interest in purchasing Greenland, as he explained why he abruptly canceled a trip to the European nation next month. … The statement from [Ms.] Mette Frederiksen, the 41-year-old prime minister of Denmark, had called Mr. Trump’s hope of buying Greenland ‘absurd.’ …

“‘I thought it was a very not nice way of saying something,’ Mr. Trump told reporters. ‘But all they had to do is say, no, we’d rather not do that or we’d rather not talk about it.’ …

“Mr. Trump was said to have been bothered by the mockery he received from officials in Denmark and elsewhere over the news, first reported by The Wall Street Journal, that he had instructed his advisers to explore whether it was possible to take over possession of Greenland.”

Maybe calling a woman “nasty” could finally shake Senate Majority Leader Mitch McConnell’s (R-Ky.) blind self-dealing loyalty to the president. Maybe that could spark Mitch to get Anti-Trump Curious. Or maybe this might do it: Trump thought he could buy Greenland, though his aides tried to talk him down and even leaked the story to alert the world.

How about a fat guy calling another fat guy fat: Does that offend any GOP legislators? ■