GOP: Champion of States’ Rights, Except When They’re Not 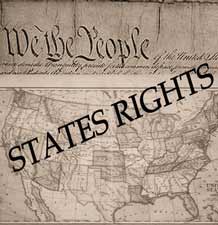 We are intellectually exhausted. Either that or, as they say, not paying attention. Any new Trumpian outrage or corruption investigation is simply another teardrop in an ocean of patriotic discouragement and fear for our country. Few are listening anymore as the outrages — and crimes — accumulate. This is how the president has inoculated himself against impeachment and conviction so far. Simply look to this (typical) week’s headlines to contemplate the Sisyphusian task of keeping track. (scroll down for full article)


We are intellectually exhausted. Either that or, as they say, not paying attention.

Any new Trumpian outrage or corruption investigation is simply another teardrop in an ocean of patriotic discouragement and fear for our country. Few are listening anymore as the outrages — and crimes — accumulate. This is how the president has inoculated himself against impeachment and conviction so far. Simply look to this (typical) week’s headlines to contemplate the Sisyphusian task of keeping track.

For the big picture record, there are at least 29 ongoing criminal investigations related to Donald Trump: 10 federal, 8 state and local, and 11 congressional. Can they all be “Deep-State”-motivated?

There are three legs to the Trump presidency stool: corruption (see above), incompetence, and amorality.

From the incompetency leg, note this week that the White House is trying to abort California’s right to lower auto emissions levels below existing U.S. government standards.

Donald has made the primary goal of his presidency the undoing of all President Obama’s good work, including fighting climate change. Donald cares not whether his grandchildren, when they grow up, will be able to go the beach without hazmat suits (— thanks to The Simpsons writers for that one). Bad enough. Now he wants to stop individual states from caring, even if he does not. I guess this also covers the amorality leg.

Of course, Republicans are falling into line no matter their personal views or ethical compass.

What we’re seeing is another episode in the laugh-out-loud comedy, GOP: Champion of States’ Rights, Except When They’re Not. Only the states that support Trump Republican policies get the rights.

“The Trump administration plans this week to revoke California’s long-standing right to set stricter air pollution standards for cars and light trucks, the latest step in a broad campaign to undermine Obama-era policies aimed at cutting greenhouse gas emissions to combat climate change. … The move threatens to set in motion a massive legal battle between California and the federal government, plunge automakers into a prolonged period of uncertainty, and create turmoil in the nation’s auto market. …

“Already, 13 states and the District of Columbia have vowed to adopt California’s standards if they diverge from the federal government’s, as have several major automakers. California leaders on Tuesday said they will fight any challenge to their autonomy. ‘While the White House has abdicated its responsibility to the rest of the world on cutting emissions and fighting global warming, California has stepped up,’ Gov. Gavin Newsom (D) said. ‘It’s a move that could have devastating consequences for our kids’ health and the air we breathe, if California were to roll over. But we will not.’”

Even the damn automakers agree with California. Even the manufacturers don’t want their kids in hazmat suits at the beach. Even Ford Motor Company can see beyond the end of its hood ornament (and nose).


Heart of the Matter

My good friend Bob O. sent me a thought piece written by Eric Anthamatten five months after Inauguration Day 2017. It rings as true today as it did back when Mr. Trump had to take an acting job to shore up his faltering business operations:

“In a recent Quinnipiac University poll, respondents were asked what word immediately came to mind when they thought of Donald Trump: The No. 1 response was ‘idiot.’ This was followed by ‘incompetent,’ ‘liar,’ ‘leader,’ ‘unqualified,’ and finally, in sixth place, ‘president.’ Superlatives like ‘great’ and a few unprintable descriptives came further down on the list. …

“[I]diot can be defined as such: a prepubescent, parasitic solipsist who talks only to himself. … Humans evolved for the most part by putting community first and the individual second. … [S]elf-preservation was always also social preservation. The ‘I’ is in its very existence also a ‘we.’

“The idiot does not understand this, and thus does not understand how he came to be, how he is sustained and how he is part of a larger ecology. The idiot cares nothing about public life, much less public service. The idiot cares only about his own name. The idiot, by way of his actions, can destroy the social body. Eventually, the idiot destroys himself, but in so doing, potentially annihilates everyone along with him. He is a ticking time bomb in the middle of the public square.”