I Got Your “Metrics” Right Here 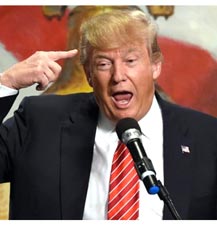 Unfortunately, we know all too well about the metrics in Donald’s head. The criticism of President Trump is not to bash him (well, maybe a little). The primary purpose for keeping up the criticism is because it’s the only reason he’s taken any of the right action he’s taken. Look no further than the cockamamie cutting of auxiliary funding for state and local testing. Virtually every independent medical expert avers that testing, testing, testing is the only way out of this pandemic, and the U.S. is WAY Behind. But Trump cut funding support for testing. Until he reversed that cockamamie decision after ferocious public backlash. Why would he make such a stupid, callous decision in the first place? Many speculate. But it might be Oscar’s razor — you know: the simplest explanation is usually the right one. Maybe he’s simply that stupid. What we DO know is that legitimate, blistering criticism is the only thing that got Donald to change his mind. (scroll down for full article)

Metrics Are in His Head

[REPORTER]: “Can you say, sir, what metrics you will use to make that decision [to reopen the economy]?”

[DONALD TRUMP]: “The metrics are right here [(points at head)]. That’s my metrics. That’s all I can do.”

In response to the dreadful lack of U.S. coronavirus testing, the president said this:

“There’s not a lot of issues with testing. … We’re leading the world now in testing, by far.”

But he’s wrong. Or for the more cynical among you: He’s lying.

“During Wednesday’s briefing, Vice President Pence said more than 1.2 million tests have been performed on Americans. Given the population of the U.S. (about 327 million), that’s roughly 1 in every 273 people [0.3%], as of April 2.

The U.S. per capita testing rate is dangerously, embarrassingly low.

Unfortunately, we know all too well about the metrics in President Trump’s head.

A White House-designated “thought leader” on Donald’s own Great American Economic Revival Industry Groups — a panel of experts and CEOs the administration has assembled this week to determine how and when to reopen the U.S. economy — said this:

“Larry Lindsey, a former economic adviser to President George W. Bush, … was invited by House Minority Leader Kevin McCarthy (R-Calif.) to give an overview of the U.S.-China trade war. Lindsey also [brought] research on Trump’s character, telling Republican lawmakers that he had asked two psychologists to evaluate the president from afar. The professionals found that Trump was a ‘10 out of 10 narcissist.’ … ‘That’s what he scored.’ Lindsey said … Trump’s behavior [was] a symptom of his upbringing and a mother who didn’t pay enough attention to him. … Lindsey also compared Trump’s long-term planning ability to that of an ‘empty chair.’”

OK, George W. Bush adviser Larry Lindsey saying Trump has mommy issues might have been inaccurate. Clearly we know it’s the daddy issues that are much more consequential to Donald’s pathology.

Calling the president an “empty chair” in characterizing his long-term planning ability, however, is just wrong. Empty chair implies no planning, no action. But we would be so much better off if Donald simply did nothing while in office. To the contrary, he’s done tremendous damage through most of his actions. And his long-term planning has been spot on (as the kids like to say): he continues to enrich himself corruptly, and he’s stayed out of prison despite numerous felonies.

“When somebody’s president of the United States, the authority is total.”

President Trump said this as he was (mistakenly) articulating his complete control over when governors will reopen — or not — their states’ economies. Even Liz Cheney (R-Wyo.) said in response, “The federal government does not have absolute power.” Even National Review and Fox News’ Brit Hume called this statement “reckless.” Even David Crosby says Donald has let himself go (— thanks to Triumph the Insult Comedy Dog for that last one). (And apologies to Mr. Crosby, whom I understand has reaped the benefits of positive lifestyle changes since the time of this [paraphrased] Triumph quote.)

WHO’s on First (I couldn’t resist)

“President Trump announced Tuesday that he will suspend payments to the World Health Organization in response to the United Nations agency’s handling of the coronavirus pandemic, as the organization is in the midst of combating a global outbreak that has killed thousands and crippled world economies. Trump’s announcement was expected, as he seeks to deflect blame for his early dismissal of the virus as a threat to Americans and the U.S. economy. … ‘We have not been treated properly,’ Trump said.”

“Halting funding for the World Health Organization during a world health crisis is as dangerous as it sounds. Their work is slowing the spread of COVID-19, and if that work is stopped, no other organization can replace them. The world needs WHO now more than ever.”

Several prominent virologists and medical pundits called it “insanity” to cut WHO funding during a pandemic.

Keep the Criticism Up

The criticism of President Trump’s pandemic response is not to bash him and hurt his reelection chances (well, maybe a little). The primary purpose for keeping up the criticism is because it’s the only reason he’s taken any of the right action he has taken. Look no further than the administration’s cockamamie move Friday to stop auxiliary funding for state and local coronavirus testing sites.

Virtually every independent medical expert on the planet avers that testing, testing, testing (to be able to trace and quarantine) is the only way out of this crisis, to achieve the goal Donald himself wants: to reopen world economies. The U.S. is dangerously, embarrassingly near the bottom of per capita testing among developed nations. But the White House decided to cut funding support for the relatively few state and local testing sites in operation.

Until they reversed that cockamamie decision after ferocious public backlash.

Why would the White House make such a stupid, callous decision in the first place? Many speculate. We might never know why. But it might be Oscar’s razor — you know: the simplest explanation is usually the right one. Maybe the administration is simply that stupid.

What we do know is that legitimate, blistering criticism is the only thing that got Donald to change his mind, to correct his colossal blunder.

President Trump initially wanted his lie-detector-graph of an over-sexed Sharpie signature on each government Economic Impact Payment check. But the law said a president was not authorized to sign Treasury payments. So he settled for having his name printed on the memo line, the spot where Aunt Evelyn writes “Congratulations!” on your high school graduation gift check.

Connecting in the language of the common woman and man, U.S. Treasury Secretary Steven Mnuchin assured struggling out-of-work Americans that their “bridge liquidity” remittance of $1,200 per adult will be disbursed as planned and that it’s intended to hold them over for 10 weeks.

This transparent presidential promotion thing has never been done before in the history of IRS refunds or government stimulus/reimbursement checks. The president believes he can fool people into thinking the money comes from him. And he gets the free advertising benefit for his reelection campaign. It likely will delay checks at least several days for desperate citizens who need them.

This is all you need to know about Donald J. Trump. ■