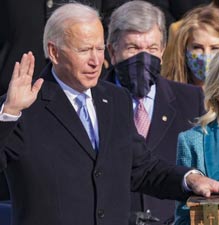 This is my last weekly commentary on the Trump presidency. (I will do one more piece for the book down the road: an epilogue tying up some Trumpian loose ends.) I can hear the cheers coming back at me through my keyboard as I type, including from all of MAGA Nation (at least the seven followers who ever read my stuff over the past four years) and friends who are simply sick of all-things Trump.

The former president has been mostly quiet this past week, making no public appearances except his poorly attended end-of-presidency send-off Wednesday morning at which he sang his predictably mendacious Trumpian Greatest Hits. Aides have kept him from interacting with reporters before his final exit, fearing his extreme “volatility.” The primary White House news of the week falls under the media-dubbed “pardon watch.” And late on the eve of President Joe Biden’s inauguration, Mr. Trump did not disappoint:

“President Trump on Tuesday granted clemency to 143 people, using a final act of presidential power to extend mercy to former White House strategist Stephen K. Bannon, well-connected celebrities, and nonviolent drug offenders — but he did not preemptively pardon himself or his family.

“Among those who were pardoned or who had their sentences commuted on Trump’s final full day in office were the rapper Lil Wayne and former Detroit mayor Kwame Kilpatrick, who has been serving a 28-year prison sentence on corruption charges. Trump also pardoned two former Republican members of Congress, Rick Renzi of Arizona and Randall “Duke” Cunningham of California. Both had completed prison terms that stemmed from corruption convictions. A third, Robert “Robin” Hayes of North Carolina, was also pardoned after finishing a probation sentence for making a false statement during a federal investigation.”

[FUN FACT:] Steve Bannon had not been convicted yet but was under indictment for fraudulently collecting and stealing contributions to a “Build-the-(southern border)-Wall” fund.

Note that Trump’s long (multi-hundreds of entries) clemency list of overwhelmingly Caucasian corrupt politicians and businessmen — “scores of crooks and cronies,” per columnist Dana Milbank — reflects the very crimes of which Donald is guilty as sin, the same indictments and convictions he’ll be fighting off for the rest of his life. The cherry? Many of those crooks and cronies paid Trump allies high fees for those pardons. How is this not illegal!?!

Then he tops it off by letting one of his tippy-top swamp creatures off the hook: Bannon, the guy that fleeced Trump’s own working-class supporters by conning them out of money they thought was going to “Build That Wall.”

Other than that, I thought I’d lay out a few notable Trump administration-defining recent occurrences and a few era-defining firsts.

— 147 Republican members of Congress feigned belief that the election was stolen from their president, and backed up their fake belief by voting to overturn the Electoral College Vote — even just hours after the Insurrection of Jan. 6.
— Donald Trump is the first president in 152 years to boycott his successor’s inauguration.
— The Trump administration handoff of the presidency is the first non-peaceful transfer of power since the Civil War.

— The U.S. COVID-19 death count surpassed 400,000 Jan. 19, 2021.
— President-elect Biden oversaw a national memorial service on the eve of his swearing in to collectively mourn pandemic victims. This is the first memorial, or even offering of condolences to families, from the White House since President Trump began playing down the first American coronavirus death Feb. 6, 2020.

The End of Trumpism

President Joe Biden took the oath of office, administered by Chief Justice of the Supreme Court John Roberts, 12 minutes before the constitutionally designated time of power transfer (noon) in a seemingly symbolic show of national anxiousness to move on from Trumpism. 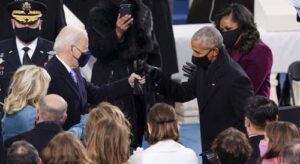 President Biden gave a soaring 22-minute speech. Fox News’ last-remaining respectable journalist, Chris Wallace, called it the greatest presidential inauguration speech of his lifetime. Later that night, other Fox hosts couldn’t wait to begin building their wall of mendacity and ad hominems, from belittling the way Joe walks to asserting that “Biden’s not mentally well and everyone in Washington knows it but they won’t report it.”

Can we make an agreement to boycott the Laura Ingrahams and Tucker Carlsons of the world? Because here’s the thing about people like them:

When you deny things you know and wish not to be true, you are a waste of time. If you’re a Fox News talk show host with high ratings, you’re dangerous. When you deny the veracity of legitimate information sources, you’re dangerous. When you ask for proof that the sun rises in the east, you’re not an honest debater. By your standards of un-critical thinking, all truth is deniable, and there is no reality except that which your leader deems so. Once this intellectual insincerity has been exposed about a person — you — any further attempt at critically thoughtful debate is a colossal waste of time.

And if you’re a Fox News talk show host with high ratings, you are dangerous. 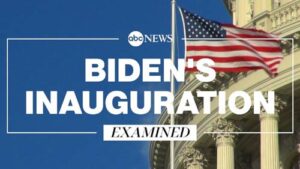 Newly inaugurated President Joseph R. Biden Jr. means business. Just a few hours after his swearing in, he signed 17 presidential executive orders and directives prepared by his legal team in the preceding weeks to reverse Trumpian policies that have caused our country the “greatest damage.” The following actions were taken: 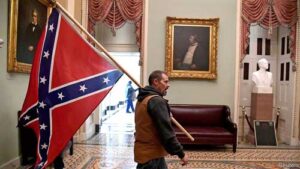 “Woke-ism, multiculturalism, all the -isms — they’re not who America is. They distort our glorious founding and what this country is all about. Our enemies stoke these divisions because they know they make us weaker. … Censorship, wokeness, political correctness, it all points in one direction — authoritarianism, cloaked as moral righteousness.”

No, it’s Mike Pompeo’s and Donald Trump’s authoritarianism that is cloaked as these -isms: Republicanism, conservatism, anti-PC-ism, and (phony) patriotism.

“Multiculturalism [is] not who America is.” The now-former secretary of state Pompeo thinks the American melting pot of cultures (the very definition of multiculturalism) is a fondue warmer scientists use for creating vaccines to insert chips in all of us and cause autism. It’s like this guy never had an elementary school history class.

And let’s put this term woke to bed. It’s been around since WWII and has resurfaced. I don’t like the term (for some reason I can’t put my finger on), but it simply refers to raised consciousness — which is a good thing.

And it solidified the fight against Trumpism.

The road to raised consciousness has many hills and dips, but it never ends. In honor of Martin Luther King Jr.’s birthday week: “The arc of the moral universe is long, but it bends toward justice.”

“President Trump’s four years in office come to a close Wednesday after a reign defined by constant chaos, corruption, and scandal, a tenure that numerous scholars predict is destined to rank him among America’s worst presidents. …

“To Leah Wright-Rigueur, associate professor of American history at Brandeis University, Trump’s presidency has been a case study in the ‘naked, unadulterated pursuit of power and self-interest, at the cost of 400,000 lives and at the cost of the American union.’”

(Nakamura, David; “As Trump’s Presidency Recedes Into History, Scholars Seek to Understand His Reign — and What It Says About American Democracy”; The Washington Post; 1/18/2021)

“In the [May 2020] video, [Otero County, N.M., Commissioner Couy] Griffin said, ‘The only good Democrat is a dead Democrat.’ He qualified in the video that he was only speaking metaphorically about politics. … [Now he] has been arrested in the riot.

“Trump promoted the video by saying, ‘Thank you Cowboys [for Trump]. See you in New Mexico!’ (Twitter suspended both Trump’s and the Cowboys for Trump accounts this month.)

“But while Griffin qualified his comments in the video, he later indicated to the Daily Beast that he wasn’t speaking entirely figuratively. He suggested Democratic governors who locked down their states amid the coronavirus pandemic could be guilty of treason and might face the death penalty. ‘You get to pick your poison: You either go before a firing squad, or you get the end of the rope,’ Griffin said.”

(Blake, Aaron; “Trump Promoted N.M. Official’s Comment That ‘The Only Good Democrat Is a Dead Democrat.’ Now the Man Is Arrested in the Capitol Riot.”; The Washington Post; 1/18/2021.)

Mr. Trump’s impeachment trial in the Senate is scheduled to start within days or weeks. He’s been impeached in the House for promoting violence toward political opponents and the government: “Article I (of 1), Incitement of Insurrection.” Though already out of the White House, accountability and possible exclusion from future public office are key factors in pursuing the charges.

The Griffin video retweet by the former president might just be Exhibit A.

You might have heard about a certain recent past president who liked to exaggerate (with military force) his inaugural crowd size while comparing it to that of his predecessors. This year, former president Trump ensured that pictures of his successor’s inaugural crowd size definitely would reflect a far smaller number than his own.

Inauguration Day ceremonies were a far cry in 2021 from the usual fare. As president, Mr. Trump ignored a world pandemic that has killed over 400,000 Americans since early 2020. Probably half or more of those could have been avoided with competent, non-corrupt leadership.

Then the Insurrection of Jan. 6 happened. Former president Trump called his supporters to Washington, D.C., the day of the Electoral College vote certification (his perceived last chance to retain power). He incited them to breach and ransack the Capitol building. They brought guns, zip ties (for handcuffs), high-powered mace, Tasers, bats, hockey sticks, and all manner of other tactical gear. They terrorized members of Congress and chanted “Hang Mike Pence!” and “Where’s Nancy [Pelosi, House speaker]!” while rampaging through halls and offices.

Consequently, for public health and security reasons, Inauguration Day ceremonies were trimmed back to a few hundred attendees instead of, for example, Barack Obama’s 2009 estimated 1.8 million people. The National Guard deployed 25,000 troops to ensure safety. Everyone at the festivities wore masks. 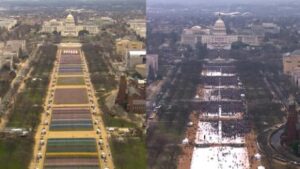 Instead of Trump lying about the photo comparison showing his relatively sparse crowd of an estimated 300,000 to 600,000, he’ll be forever remembered for 2021 Inauguration Day National Mall photos of 400 solemnly lighted columns framing the reflecting pool (one for each 1,000 U.S. COVID-19 deaths) near a forest of 200 American flags (one for each 1,000 canceled invitations).

My partner and I got our official Inauguration Day invitation last week, all glossy and formal-like. We’d made the non-refundable-hotel-room commitment a week after the election (four nights at triple the normal D.C. Hampton Inn prices, five minutes’ walk from the White House). We had hoped we weren’t too late and we weren’t, snagging some of the last available reservations. Then we requested inaugural tickets from our congressperson, as required.

In early December, the COVID-19 travel warnings started blaring. Since my partner and I are somewhat older than 35, we made the painful decision not to go to Washington. After a fight with the hotel (my partner is really good at this type of thing), we did get a refund on the rooms.

Then came Jan. 6, the Trump-provoked riots at the Capitol building, and the succeeding security lockdown of government row, still in effect.

It’s always somethin’: If it’s not a once-in-a-century pandemic, it’s an armed insurrection. So nobody got to go except a few hundred elites. What a week on-site it could have been. Anyway, I took the day off work and we watched the ceremonies virtually.

But we’ll always have our official glossy Inauguration Day invitations — and Paris. ■ 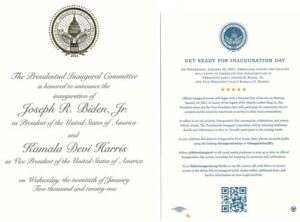