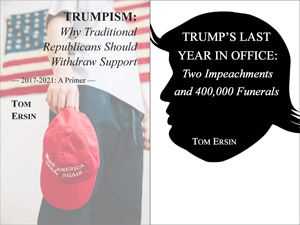 Withdrawing support for Trumpism simply means you value American representative democracy, though imperfect, over encroaching autocracy. You value integrity and faculty, though fallible, over corruption, incompetence, and amorality. You value honesty, though never absolute, over inveterate mendacity.

You believe that truth is a thing.

If you were a Trump supporter but at some point — no matter how late — became enlightened and withdrew your support, I admire and respect you. I’ve written about the importance of dispassionate logic and reasoning. It is those taken in early that have shown the most courage and strength of corrective reason in overcoming the titanic barrage of disinformation. You, apparently, can handle the truth. Are we clear!? Crystal.

If you’re under age 30 and still support Donald’s vision, I offer you a hall pass. It’s difficult to break free of phony populist or dogmatic evangelical leverage exerted by parents who never learned to think critically. Which explains my ever-present push for a required K-12 critical thinking curriculum and more humanities studies in secondary education.

But here’s the thing, and there’s no getting around this. If you’re over 30, well past adolescence, and still support Trumpism — in spite of the deadly, inhumane, anti-democracy pollution with which it has befouled the waters flowing beneath your MAGA bridge — you are one of two things: 1) willfully disinformed; or 2) selfishly amoral.

Not amoral, you protest? I’ve laid out in factual detail a weekly, seemingly endless series of reasons for withdrawing support for Trump and Trumpism. I’ve given you the researched, documented truths and citations with meticulous attribution to confirm these facts for yourself. I have mixed in quirky references to classic movie quotes and SNL jokes to make the medicine go down easier. I’ve clarified why no amount of support for pro-life, anti-gay-marriage judges or the mythical MAGA “economy” can justify massive needless post-born pandemic death, child torture, and the violent, methodical dismantling of American democracy.

You no longer can be disinformed. Unless it’s willfully. Which I believe is amoral.■