U.S. Must Talk to Rogue Governments — Without Preconditions 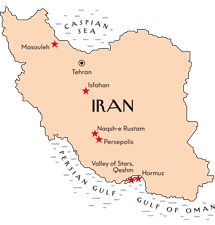 In his first six months in office, President Obama has begun planning talks with certain so-called rogue governments: those that have engaged in hostile behavior toward the United States and other free-world countries.

The George W. Bush administration consistently refused to communicate with rogue governments unless they stopped their rogueing. After eight years of that swimmingly successful policy, the Taliban has come to represent a Middle Eastern beacon of Jeffersonian democracy. Iran and North Korea have become founding members of the Antithesis of Evil.

Granted, the situation with the Taliban and al-Qaida precluded any negotiations with them. But W.’s steroidal international tough-guy stance effectively dared them to increase their attacks against us:

“Anybody who wants to harm American troops will be found and brought to justice. There are some that feel like if they attack us that we may decide to leave prematurely. They don’t understand what they are talking about if that is the case. Let me finish. There are some who feel like the conditions are such that they can attack us there. My answer is, bring ‘em on.”

“My answer is, bring ‘em on.” What did our enemies do? They brought it on. To be fair, President Bush ultimately expressed regret over this cowboy tough talk, though not until 2006, long after substantial harm had been done — and long after a follow-up softening statement could have saved American (and other) lives.

No bargaining entity, whether a real estate agent or a rogue government, wants to appear weakened by agreeing to concessions before talks can begin. That is not negotiation, that is surrender. Individuals have one satisfactory option for solving disagreements: talking to each other. Family therapy experts will attest to this core principle of conflict resolution. As global family members, governments must operate under the same principles.

There was debate within the Bush administration about whether or not to conduct high-level talks with governments such as Iran, Iraq, and North Korea without preconditions. The goal of those talks would have been to entice those governments to abandon their nuclear (or other mass destruction) weapons ambitions. Administration hard-liners argued that any talks with those nations before they gave up their weapons programs would be construed as early concessions by the United States. Cooler heads — even many Republicans and Bush administration moderates — argued that talks without preconditions were the sensible way to proceed: no government, rogue or otherwise, wants to enter negotiations in an inherently weaker position. The cooler heads lost.

There are many examples that illustrate the failure of the Bush-Cheney policy. When W. said, “Bring ‘em on,” referring to opposition forces in Iraq in 2003, instead of ever considering diplomacy, the opposition brought it on. Refusing high-level talks with Iran produced the opposite effect desired by the administration: Iran has remained defiant in pursuit of its nuclear program. Bush 43 consistently refused to participate in multilateral talks with North Korea. The result has been hardened North Korean defiance, missile-launch testing, and other provocative overtures. The administration refused any significant dialogue with Syria unless Syria discontinued its support for U.S.-deemed terrorist groups. The result has been no improvement in their stance and an increase in tensions. Bush’s consistent refusal to talk to the rogues failed to produce any positive coercive results.

There are entire Ph.D. programs devoted to the study of organizational communication. They deal extensively with the way organizations communicate within their own system and with other systems — similar to the way governments might communicate with each other. Granted, there are differing theoretical approaches. There is the Classical Management approach. There are various systems theories, from general to biological and open to closed. There are virtually no theories, however, that encourage a communication vacuum in order to conduct conflict resolution.

In the 1960s and ‘70s, Virginia Satir and other counseling pioneers began to look at family therapy as a systems analogy. They made several important observations. First, the family is a system in that when one member is affected, all members are affected in different ways as the forces of change move through the system. Second, though a family problem often seemed to originate with one member, it was more effective (and realistic) to look at the family as a whole when attempting to ascertain where relationship problems lie.

The term identified patient was coined to reflect the systems approach to family therapy. The identified patient (e.g., alcoholic husband, ne’er-do-well child, etc.) is the family member exhibiting overt dysfunctional coping skills. But treatment is based upon the belief that most often those symptoms reflect dysfunction (and require communication) within the family as a whole. This concept extrapolates to the global family. Though the global family comprises organizations (governments) rather than individuals, the primary principle of communication — that communication must exist — is not in dispute.

Listen to Your Experts

“We need to figure out a way to develop some leverage, … and then sit down and talk with them. If there is going to be a discussion, then they need something, too. We can’t go to a discussion and be completely the demander, with them not feeling that they need anything from us.”

Two of the president’s other top advisers, Jim Baker and Secretary of State Condoleezza Rice, advised him to engage:

“Baker would be willing to help implement [talks] as a special envoy if the president offers him enough authority. … Condoleezza Rice, who has pushed for a comprehensive diplomatic approach to the region, might be supportive, even enthusiastic. She knows that the administration needs to salvage a foreign policy legacy beyond the botched war in Iraq.”

“The United States should immediately launch a new diplomatic offensive to build an international consensus for stability in Iraq and the region. This diplomatic effort should include every country that has an interest in avoiding a chaotic Iraq, including all of Iraq’s neighbors.”

The administration had one primary reason for refusing negotiations with rogue countries until they met specified preconditions. Bush and Cheney purported that to do otherwise would give opposing leaders unearned status on the world stage, which would embolden them. As Walter Isaacson sarcastically framed the Bush-Cheney position, “Iran should be denied the honor of our direct discourse until it suspends its nuclear enrichment programs.” (Isaacson, 2006.)

Post Hoc Ergo Propter Hoc (which means, “I know you are but what am I?”)

President Bush and Vice President Cheney argued that the rogue governments would eventually accede to avoid sanctions, isolation, and ostracism from the world community. Their sole piece of evidence was the example of Libya, which finally discontinued its bad behavior ostensibly to reap the benefits of U.S. approval. But this argument is full of holes. There is more to the Libya story than Bush-Cheney ever made public:

“In fact, the rehabilitation of Libya … is the culmination of a 10-year process of international diplomacy involving engagement and sanctions. The brunt of that diplomatic effort was earlier borne by our European allies, who warned that the U.S. effort to intimidate and isolate Libya would be counterproductive. After all, the earlier use of American force against Muammar el-Qaddafi in 1986 for Libya’s alleged role in the Berlin disco bombing had only led to Libya’s retaliation with the downing of Pan Am Flight 103 over Lockerbie, Scotland.”

Here’s the explanation in logical fallacy-speak. At its core, Bush’s Libya argument is a fallacy of cardstacking: the withholding of data that supports the opposing argument. W. never mentioned behind-the-scenes European efforts throughout the celebration of his Libya victory. Second, it is a fallacy of overgeneralization: the Libya example is the only one they had. Finally, Team Bush-Cheney also attempted to argue their case as cause and effect (though they had only one cause and one effect). But they based it on a false reading of the facts — a classic example of false causation (post hoc ergo propter hoc, which means, “I know you are but what am I?”).

They wanted us to believe their policy caused the rogues to behave. Other administration fallacies included ad hominem arguments (Axis of Evil), red herrings (undue respect gained by the rogues on the world stage), and oversimplification (all it takes is to deny the rogues our attention and respect).

To negotiate or not to negotiate, without preconditions: that is the Shakespearean bastardization. The answer may determine the continued existence of human life on earth. As the Bush-Cheney administration refused to talk with nations it wanted to disarm, those nations became more armed, and their positions more hardened. Indeed, many observers maintained that after seeing what happened to Saddam and Iraq, rogue nations came to believe it was all the more important to obtain a nuclear weapons deterrent. This produced increased risk for the free world including the dangers of poor weapons management, poor judgment, and the rogues stealing weapons from each other.

George W. Bush’s cowboy methods of imposing U.S. foreign policy initiatives did not work; in fact, they exacerbated the situation. The only way to get these rogue governments to come to the negotiating table is to show them some respect, even if begrudgingly, and allow them to negotiate from a perceived position of equal footing — and to let them save face if necessary. Grade school students learn these principles. Counseling and organizational communication professionals have accepted them for many years. Governmental negotiations and conflict resolution require respect for the same basic principles. This is how it works within a family system and how it must work in a global family system.