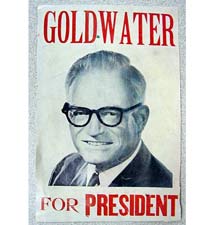 [Barry Goldwater meets a guy in a Paul Revere costume]

“Exremism (sic) in Defense of Liberty Is no Vice.”

This bastardized Barry Goldwaterism was written on a note that was attached to a brick and thrown through a Niagara Falls, New York, Democratic House member’s office window — in response to the passage of health care reform. That fun little message was followed up by a hilarious anonymous threat to assassinate Rep. Louise Slaughter’s (D-N.Y.) family. (Pettus, Emily Wagster; “Hurled Bricks, Threats Surround Health Overhaul”; The Associated Press; 3/24/2010.)

Those tea partyers are a riot. Check out this erudite protester’s sign; she’s having a great time proudly participating in democracy:

Get A BRAIN! MORANS (sic)

They’re getting their point across with humor. Now read this collection of hieroglyphs displayed by a grinning refugee from an American Revolution re-enactment after-party:

Stop it! My sides hurt — you guys are killin’ me! In case that tidbit of tea party wit flew over your head, the man holding the sign and dressed in a bright blue Paul Revere outfit was apparently trying to say, “Dissent is the highest form of patriotism,” a quote often attributed to Howard Zinn, Thomas Jefferson, or Jefferson’s chamber pot attendant; no one is sure.

Now, see? Nothing to fear. They’re simply a bunch of fun-loving paytreeitts — the men wear costumes and the women staple tea bags to their hats.

But don’t call them teabaggers. That means something else.

Since this article started with a mangled quote from Mr. Goldwater, what else did Barry have to say?

Now THOSE are funny. And they hold up really well. What’s also funny is that you never see any of those quotes on teabagger — I mean, tea party — protest signs. Barry Goldwater was actually coherent and logical on many issues, especially in his later years.

Which brings me to coherency and logic. Don’t get me wrong, emotions have their place. But let the emotions be emotionally logical — and honest. By this I mean don’t put the cart before the horse. Let the facts be considered and communicated with a reasoning mind. Then, if this reasoned consideration of the facts leads to an expression of honest emotion, so be it.

Remember: You can lead that horse to water, but you can’t rationally convince him to drink if you’ve consistently argued (with false emotion, on the Horse News Network) that the water comes from a sot well. That’s mendacity (I saw Cat on a Hot Tin Roof). All you’ve done is create a population of thirsty horses — who stay thirsty while good, progressive, Democratic water is right in front of them. Which they won’t drink. Because of you.

Barry Goldwater’s concerns about incivility and false conservatism are as pressing today as they were in his time. If we don’t embrace critically thoughtful communication — especially over the airwaves, and through the internets and the Google — truth will become extinct. As it is now, we often can’t get to the logical heart of an argument because they hang us up debating about the definition of truth. We must eschew (“Gesundheit! Thank you.”) the mendacity (I saw Cat on a Hot Tin Roof) and prevarication of tea party role models and ultraconservative circus clown entertainers. Sure, you can always find a progressive or two guilty of these tactics. But overall? C’mon.

The serenity to ignore the idiots I cannot change,

The courage to hear opposing opinions I can change,

And the wisdom to know the difference.