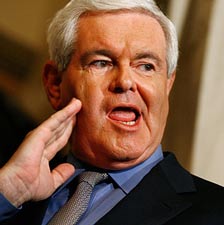 [Other news: Bear defecates in woodland area supporting an understory of shrubs, herbs, or grasses]

For some time now, Newt Gingrich has been saying black people should be demanding paychecks, not food stamps. (campaign event, senior center, Plymouth, N.H.; 1/5/2012; et al.) He’s also been saying that President Obama is the greatest food stamp president in history. (CNBC; 12/6/2011; et al.) To be fair, Newt sometimes refers to poor people or just people when he zings the paycheck-food stamp line. But he uses black people in his delivery enough times to transmit the not-so-subtle code effectively.

Here’s Newt’s decoded (by me) message, just in time for the must-win South Carolina GOP primary:

This is classic Gingrich: pander to the worst characteristics in people (in this case, latent and blatant South Carolina Caucasian racism) using demagogic, coded bigotry while incorporating built-in plausible deniability. By the way, Newt doesn’t think any better of other minorities. But he’s leaning on African-Americans, for the benefit of Caucasian ears, to berate and defeat a black opponent.

Newt Gingrich and Rush Limbaugh come from the same advanced school of racist dog-whistling. Let me reprise the infamous Limbaugh comment during his short stint on Monday Night Football: “I think the media has been very desirous that a black quarterback do well. They’re interested in black coaches and black quarterbacks doing well.” (Limbaugh, Rush; as cited in Shapiro, Leonard; “Limbaugh Quits TV Job Under Fire”; The Washington Post; 10/2/2003.)

Because Rush’s brand of color commentary is disgusting and insulting in most any media outlet other than the one he owns, Monday Night Football fired him. If you think that might have been an isolated incident, recall this one: “Have you ever noticed how all composite pictures of wanted criminals resemble Jesse Jackson?” And if you think those quotes were in some kind of gray area, see if this on-air directive to an African-American caller puts Rush in the black: “Take that bone out of your nose and call me back.” (Limbaugh, Rush; as cited in Gehr, Richard; “Mouth at Work”; Newsday; 10/8/1990.)

Back to Newt. He is a racial coding rock star — with groupies. Last Monday, Martin Luther King Jr. Day, Gingrich had a dustup with moderator Juan Williams, an African-American journalist, at the 2012 Myrtle Beach, South Carolina, Republican presidential primary debate. Gingrich received a standing ovation from the red meat crowd for his condescending non-answer to a Williams question about possible offensiveness to poor and black people surrounding Newt’s recent food stamp-themed remarks. In your face on MLK Day, Juan!

Then today, news stations ran a campaign event clip showing a Caucasian woman thanking Newt for “putting Juan Williams in his place.” Newt’s vest about popped a button. Gingrich thrills fans by disrespecting debate moderators, essentially bashing the messenger. But he gets a standing “O” in South Carolina if that moderator is African-American. It’s brilliant — evil, but brilliant. If only Newt would use his powers for good.

In light of it all, I’m still hopeful about this year’s American political process for the following reasons: 1) Gingrich is still considered a dangerous joke outside of the far-right crowd that is currently coddling him; 2) South Carolina Republicans and their Confederate Flag-flying state capitol will be out of the limelight after their primary in three days; and 3) to paraphrase a political pundit on today’s cable news: “That loaf of [white] bread won’t sell in most of the country.” ■