You’re Like a Steve Jobs — Without All That Genius Baggage 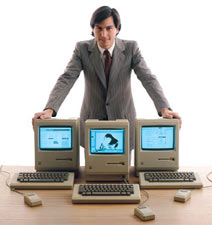 I got my first computer, a Microsoft Windows PC, in 1998. I got my first Apple Macintosh in 2003. I’ve used both formats regularly since then. When it comes to the PC-versus-Mac debate, I’m relatively unbiased. But now that Steve Jobs has passed on, rest his soul, it’s time for someone to speak up.

In my early personal computer years, I had many co-workers and a boss who were Mac fanatics. To them, Apple (who developed the Macintosh computer in 1984) was king. They were Apple computer loyalists to a fault, starting with the Apple II in the late-1970s. They schooled me on the evils of Bill Gates and his company: “Microsoft was a monopoly.” “Macs don’t need drivers” (you don’t wanna know). “Bill Gates stole ‘windows’ from Apple.” Apparently, per the Mac fanatics, Steve Jobs was nice enough to invite Bill to the Apple facilities in the early ‘80s to see what they were up to. Next thing you know, Bill “invents” the Windows Operating System.

OK. I never checked this out, but I do know that in 1988, Apple sued Microsoft — and lost — over, among other things, copyright infringement of the windows interface idea. Oh, and before I got the Mac, I learned never to ask my fanatics any computer questions. “We don’t know anything about PCs. If you want our help with computers, get a Mac.” OK.

In 2003 I decided to set up a computer-based home recording studio. After researching which was the best platform (PC or Mac) — and, of course, receiving input from my fanatics — I determined that Mac was considered the preferred OS (shop talk for operating system) for graphics and media work such as audio recording. For twice the price of a PC, I got in at the beginning of the Macintosh G5 wave. I actually had to wait two weeks before it was released.

The Mac G5 worked great, no question about it. As I learned to use OS X (say, but do NOT write, “O-S-10”), the latest release of Macintosh’s operating system, I was struck by its similarities to my Microsoft (MS) Windows system. About the only difference in driving these two cars was that the Mac X-in-the-box for closing a window was on the upper-left side of the screen instead of the upper-right. There were big differences under the hood, and I had to spend time learning that. But on the surface, the two platforms were much alike.

Over time, I met other computer recording enthusiasts. Some used Macs, some, PCs. Like me, most used Pro Tools, which is considered by many to be the industry standard for audio recording software. Originally, Pro Tools was only offered for the Mac format; ultimately, it was also released for PC users. At this stage of software development — the mid-oughts — PC and Mac Pro Tools users seemed to me almost equally satisfied with their computer’s performance, except the PC users spent half as much money.

Now, feel free to impress your friends with the following tidbit of personal computer history. Long before the term political correctness came into vogue, the initialism PC stood for personal computer. But today, PC seems a misnomer in that it excludes Apple computers, which have also always been personal computers in the literal sense. It’s sort of like the Kleenex versus tissue conundrum.

Here’s what happened: Xerox was fooling around with small computers for the home in the early ‘70s. Ultimately, IBM developed the first commercially successful personal computer in 1981. Then other computer makers developed and marketed their own machines based on IBM’s format. These IBM PC compatible computers were soon universally powered by Microsoft DOS (a command-line interface), followed by Microsoft Windows (a graphical user interface or GUI). In 1984 Apple and their new Macintosh computer (get it: apple — Macintosh) came along with their own proprietary operating system. Suddenly there was a need to differentiate Macintosh from IBM PC compatible personal computers. Ergo, the nicknames Mac versus PC. Tie this all together and you see that not every personal computer is a PC, just as not every tissue is a Kleenex.

I’m getting to my fun points, I promise. One last discussion about Apple’s business philosophy: They operate on a vertical integration model, which means Apple controls almost every aspect of production from beginning to end. Dell and Gateway buy hardware and software (including MS Windows) from other companies to assemble their computers. Conversely, Apple has tried to use only their own hardware and software — which is not available to other companies or their users — though they have softened some in recent years on the hardware side of this equation. They continue to retain dominion over the Macintosh operating system: It still cannot be legally (or practically) used on non-Apple computers.

Many business pundits point to this restriction in explaining Apple’s near demise in their pre-iPod (mid-1990s) period. Contrast this with Bill Gate’s decision to lease his Microsoft operating system to IBM rather than sell it outright — which would have locked it down to one brand of machine as Apple did. Instead, Bill was able to offer his software to all IBM PC compatible computer makers and make a jillion dollars.

Profits aside, many people respected Jobs decision to keep Apple vertically integrated. After coming back to save his company in 1997 (after being ousted in 1985), he developed the game-changing iPod — again with a proprietary format, this time of song files that couldn’t be played on any other brand of digital music player. Apple controlled the process from locking down the iPod, itself (literally, most people can’t get into the thing without breaking it), to totally controlling the song format, song purchasing, and song software (iTunes) needed to set up the iPod player. Steve said he wanted to make the listening experience idiot-proof (my words, not his).

In my view, that’s the problem. Like AOL, Jobs put training wheels on his product, which may be all right for beginners. But if I’m not ever allowed to take the training wheels off, I’ll never be able to pop a wheelie or lean into a turn. This is why I have an other-brand digital music player and not an iPod. I want to do what I want with my songs after I buy them. I don’t want to mess around with a cockamamie music file format designed to tie my hands behind my back. I want the freedom to buy songs from other companies. I want to be able to lean into my turns — no training wheels.

Anyway, Steve Jobs has passed on and, admittedly, left a changed-for-the-better world behind. Though a Henry Ford or a Thomas Edison he was not, he did many great things. I’ve learned a few other things about him. Apparently, he negotiated a visit to the Xerox PARC research lab in 1979 and saw their work with an experimental computer that had a graphical user interface (precursor to windows-on-a-screen) and a mouse — two concepts that were heretofore unheard of. Next thing you know, ole Jobs’ a millionaire. Digital gold. He took (stole?) those two monumental computer developments and incorporated them into the Macintosh. So much for indignation (and lost lawsuits) about Bill Gates looking over Steve’s shoulder. (Grossman & McCracken, 2011.)

Tiger Woods Was Not Monogamous

Another thing about Steve Jobs — he was not a people person. And Tiger Woods was not monogamous. Apparently, Steve thought nothing of trashing a subordinate’s psyche or brutalizing an employee’s ego to get results. I thought this method of management was not supposed to work. Brian Tracy, a favorite business self-help guru of mine, often said that a supervisor verbally abusing a worker was akin to taking a sledgehammer to a piece of office furniture. (Tracy, 1984.) I don’t care how much good Jobs did for business; I’ve had my fill of idiot, Mac fanatic supervisors who used their position to artificially build up their own insecure egos at their subordinates’ expense.

Finally, here’s a fact that few people know. In the 1990s, after Jobs came back to an Apple on its deathbed, he accepted a $150 million infusion of cash from Microsoft. Let me put this another way: When Apple was teetering near the cliff, about to go over, Bill Gates invested $150 million into his archrival’s company. What was his thanks for saving Apple? He was booed at the 1997 Macworld Expo convention while speaking by video. (Grossman & McCracken, 2011.)

All right, let’s sum up. Bill allegedly stole the windows idea from Apple. Steve clearly stole the fledgling graphical user interface (precursor to the windows concept) and mouse ideas from Xerox. Bill has given $28 billion dollars to his charitable foundation and ultimately plans to give away 95 percent of his fortune. Steve? Not so much. Bill was a tough business competitor, possibly crossing the line at times into questionable anti-competitive tactics. Steve sent half of his staff into therapy — OK, I don’t know if this is true. But he was, as stated earlier, “not a people person.” And Tiger Woods was not … you get it. Steve, like Bill, was a brilliant business entrepreneur. Much of Steve’s brilliance, however, resulted from using verbal and psychological abuse against his talented team members.

One of my old supervisors, a Mac fanatic and also an insecure abuser of psyches, bragged once that this description of Apple’s leader sounded like him. I said, “Yeah, you’re like a Steve Jobs … without all that genius baggage.”

(Props to Triumph the Insult Comedy Dog, from “The Conan O’Brien Show.” At a “Comedy Central Roast” of Rob Reiner, Triumph said — in reference to Reiner’s ample girth — “You’re like Orson Welles, without all that genius baggage.” (Smigel, 2000.)■