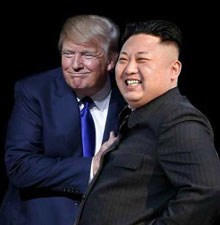 “North Korea best not make any more threats to the United States … [or] they will be met with fire and fury, and frankly power, the likes of which this world has never seen before.”
(Trump, Donald, R-N.Y., U.S. president; news conference; Trump National Golf Club, Bedminster, N.J.; 8/8/2017.)

“We had the biggest audience in the history of inaugural speeches.”
(Trump, Donald, R-N.Y., U.S. president; interview conducted by David Muir, ABC News; 1/25/2017.)

“I watched when the World Trade Center came tumbling down. And I watched in Jersey City, New Jersey, where thousands and thousands of people were cheering as that building was coming down. Thousands of [Arabs] were cheering.”
(Trump, Donald, R-N.Y., presidential primary candidate; campaign speech; Birmingham, Ala.; 11/21/2015.)

These are just a few of the myriad instances of Donald Trump prevarication and mendacity (I saw Cat on a Hot Tin Roof). They go back decades. We’ve known who this person is for a long time.

Kim Jong Un has always had access to American news, even though he allows none to the North Korean people. So what makes President Trump think Kim will take seriously the president’s latest, improvised superlative-alicious statement in the wake of hundreds of blusterous, mendacious Trumpian pronouncements?

Of course, an unwanted result of our president’s narcissistic cluelessness and incessant hot air is that even if Kim Jong Un assumes Trump’s threat is an empty one, it still could anger the petulant madman (Kim, that is) to initiate a deadly response.

Trump Has His Cake …

The Donald simply cannot turn off his sleazy, snake-oil-salesman persona. Even while boasting on national TV about his international diplomacy skills — employed during his dessert conversation with Chinese President Xi Jinping about the April 2017 U.S. retaliation against Syria for using chemical weapons — Trump could not help himself. He had to inject that the (Trump private club) Mar-a-Lago piece of chocolate cake President Xi was enjoying was “the most beautiful piece of chocolate cake that you’ve ever seen.” And of the 59 unmanned missile strikes, Trump gushed again to Fox Business Network’s Maria Bartiromo: “It’s so incredible. It’s brilliant. It’s genius.”

Now I’m guessing Kim Jong Un knows beautiful chocolate cake — the greatest imperial chocolate cake that North Korean presidential palace pastry chefs can prepare. Because if it’s not the best, chefs die. (Are we clear? Crystal?) So right there, Kim knows Trump is lying. And if he’ll lie about cake, it’s just a short jump to lying about bringing “fire and fury, and frankly power, the likes of which this world has never seen before.”

If “fire and fury” initially were not enough to convince Kim Jong Un of the gravity of his potential actions against the U.S., the president repeated his fire-and-fury threat, but the second time added “and power, the likes of which …” yada, yada. Additionally, President Trump modified the word power with the amplifier frankly. Take that, Kim! To clarify, he wasn’t being frank about the “fire and fury,” but he really meant it when he said “power.” Everyone knows when a politician puts the word frankly before another word or declaration, they REALLY mean it, contrary to everything they said before the word frankly, which they didn’t really mean, or, at least, were wishy-washy about.

… And, Frankly, Lies About It, Too

All seriousness aside, President Trump’s words carry little-to-no weight. Frankly, he lies — a lot. Democrats always knew it. Independents now know it. Most Republican legislators will secretly admit it. Heck, even his base knows it, but in their no-account, no-accountability, no-critical-thinking fantasy world, Trump’s lying is a badge of honor.

The real problem, however — at least with foreign policy — is that the world knows the current U.S. president is a liar. He lies 95 percent of the time. But ironically, that 5 percent truth-telling is the kicker, the danger. Is he truly ignorant enough to consider raining “fire and fury” down upon North Korea in a pre-emptive attack? There’s a 95-percent chance he’s lying about the seriousness of this threat, as Kim also knows. But it’s that 5-percent chance of veracity that could kill us.

Or he could be lying now, but change his mind later based upon a Fox News retweet or in reaction to Robert Mueller closing in. See, Donald Trump not only lies, he’s incompetent, impetuous, and very capable of risking thousands of innocent lives to do some dog-wagging.

This is no joke: President Trump must be removed from office before large numbers of innocent people die. Until then, we have to trust the generals to rein him in. And in all future elections, we absolutely must heed the advice of Maya Angelou — or Oprah Winfrey, or Oprah’s intern, no one knows for sure: “When someone shows you who they are, believe them; the first time.” ■