President Trump Has No Bottom; It Will Get Worse 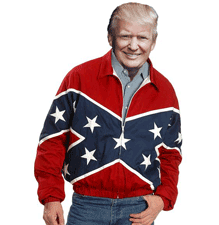 [After seven months of presidential gross incompetence and refusal to condemn neo-Nazis, Republicans must demand that President Trump resign]

Remember last week when the worst thing we had to fear from President Trump’s bombastic ineptitude was nuclear war on the Korean peninsula? Ahh, the good old days: The Donald’s schoolyard taunts while brandishing the nuclear football; snappy comebacks from Pyongyang’s “Dear Leader” about wiping out Guam and other parts of Earth; and some random Trumpian threats of Argentinian invasion and nation building thrown in for good measure.

If you thought it couldn’t get any worse, you haven’t been paying attention. We’ve had scads of it-can’t-get-any-worse moments since the president announced his candidacy. But it always does — get worse, that is.

Reminisce to November 9, 2016, the day after Election Day, when you were surprised by how many of your social media “friends” ventured to step out of the pro-Trump closet. All of a sudden you had previously-thought-to-be reasonable people posting about, “OK, we need to give the guy a chance. He’s our president now.”

Of course, I was one of those who said, “NO! We DON’T give the guy a chance! We already know how badly he will perform! He has let us know that in voluminous ways!” And my social media contacts knew I was serious because I normally hate exclamation points. I also lost a few friends when I pointed out that, even if they, as Trump supporters, are not racist, they have accepted Trump’s racism and tacitly approve it.

Out of all the Make-America-Great-Again ranters, I only de-friended one person, an actual friend, who could not stop posting hateful, vicious alt-right vitriol, usually involving the Pepe meme. I continued arguing with the rest of them until it became old.

This week Donald Trump has emboldened white nationalists and encouraged the start of a race war. If you think it can’t get any worse, you’re still wrong. But we are at the president’s current nadirian record.

— SATURDAY —
Amid other violence, a 20-year-old alleged neo-Nazi rams his car into a crowd of counterprotesters (the good guys), killing Heather Heyer and injuring about 19 others.

— SATURDAY NIGHT —
President Trump appears on television to condemn “hatred, bigotry, and violence on many sides,” without mentioning Nazis, the KKK, or white supremacists.

— MONDAY —
President Trump bows to steep internal and external pressure to say the right thing. He reads a stiff-as-a-board statement verbatim from his teleprompter, condemning the KKK, neo-Nazis, white supremacists, and hatred as “evil … [and] repugnant to everything we hold dear as Americans.”

— TUESDAY —
In a combative news conference, President Trump essentially takes back his condemnation and equates activists protesting racism with the neo-Nazis and white supremacists who threatened and killed over the weekend. He defended the Nazis and KKK as having been the ones with the legal permit to protest, and he repeated the false equivalency that there was “violence [and fine people] on both sides.” He invented a new term, the “alt-left,” to describe a nonexistent group and further prop up his falsely equivalent argument. White supremacist icons Richard Spencer, David Duke, and The Daily Stormer signaled they were encouraged and heartened by the president’s remarks.

Donald Trump’s presidency is in mortal danger of collapse, but he doesn’t seem to be concerned. Everybody and their brother, including many GOP legislators and leaders, have condemned Trump’s equivocation and apparent honest expression of his true racist beliefs. Nazis, the KKK, and other components of the alt-right support him, and he supports them. As many pundits have noted, condemning Nazis is the easiest thing in the world for an American politician to do, but Trump can’t put his heart into it.

Republicans are also receiving heavy criticism, however, including from their own. Though they condemn the KKK, Nazis, and alt-right, they won’t mention (let alone disavow) Trump by name, and they continue to support his presidency. They continue to be invertebrate.

There is only one thing to do: We must pressure the GOP to demand the president’s resignation. Top administration people must leave. All of government must refuse to work with the man until he resigns. Sure, it’s never been done before. But there never has been any president like Donald Trump. (I mean that in a bad way.) This is not Trump’s bottom. After many a “new low,” it’s clear that Trump has no bottom.

“I told you so” only goes so far. It doesn’t solve any problems. And it’s immature. But I’m fondly anticipating November rolling around this year. That’s when I’ll be looking for those “See Your 1-Year Memories” notifications from Facebook. I should have a good stream of sharable memory posts saying things like, “I’m terrified of a Trump presidency.” “Check back in a year to see if we should have just given ‘this guy a chance.’” “Talk to me next year and we’ll see how bad it can get.”

On a profoundly serious note, our deepest sympathies go to the families of Lt. H. Jay Cullen and Trooper-pilot Berke M. M. Bates — the Virginia state troopers killed in the helicopter accident while monitoring the Unite the Right gathering in Charlottesville, Virginia — and Heather Heyer, the 32-year-old Caucasian woman who lost her life at the same event while counterprotesting neo-Nazis, white supremacists, the KKK, and other groups that are part of the self-described alt-right.

Heather Heyer, by nationality and birth, would have been protected and well-treated under the alt-right philosophy. But she protested to protect the rights of all citizens, realizing that the mistreatment of one is the mistreatment of all. Never before has one of Heather’s favorite well-worn maxims meant more: “If you’re not outraged, you’re not paying attention.”

“Sad to see the history and culture of our great country being ripped apart with the removal of our beautiful statues and monuments. You … can’t change history, but you can learn from it. Robert E Lee, Stonewall Jackson – who’s next, Washington, Jefferson? So foolish! Also … the beauty that is being taken out of our cities, towns and parks will be greatly missed and never able to be comparably replaced!”
(Trump, Donald, R-N.Y., U.S. president; Twitter post series; 8/17/2017).