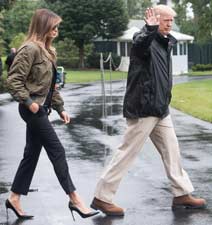 In Washington today, White House press secretary Sarah Huckabee Sanders issued a list of the president’s movements for the week:

—Wednesday: Good one, some blood.

(— writer’s embellishment; thanks to National Lampoon)

OK, I thought we needed some comic relief this week after devastating floods in Texas, an obscene presidential pardon, more Trump-Russia collusion evidence, and the fear that our country’s chief executive might provoke a North Korean nuclear attack. I paraphrased my opening from the classic 1974 National Lampoon comedy album, Missing White House Tapes (about Richard Nixon and Watergate). Of course, then, it was deputy press secretary Gerald Warren. (His boss, Ron Ziegler, apparently was out to lunch.)

The past week has produced tremendous sadness. Houston and other parts of Texas have experienced untold destruction and a still-to-be-determined number of lives lost. As of yesterday, Hurricane (now, Tropical Storm) Harvey has set an all-time record for rainfall in the contiguous United States (50-plus inches over several days), and it’s on track to be the most costly U.S. natural disaster. Deaths are mounting, thousands of people have been rescued, and tens of thousands are displaced, with the numbers — and the water — still rising. As with most American disasters, the spirit of humanity and neighbor helping neighbor has been awesome. And then there was President Trump.

Congratulations Donald, you hit No. 1 — none of these piss-ant, second-rate Obama natural disasters like Irene and Sandy on your watch. Yours is the biggest, the best. You are keeping score and you’re positively giddy.

The president and first lady visited Texas this week (clearly too soon), ostensibly to survey the damage. Though they didn’t go to Houston proper, they still diverted precious resources away from continuing rescue efforts. POTUS and FLOTUS looked like fashion models for the GQ/Cosmopolitan line of casual-but-stylish disasterwear, notwithstanding Melania’s caricaturistically high snakeskin stiletto pumps and Hollywood Wayfarers (though it was overcast).

The Donald sported brand new bright brown boots and khakis with nary a scuff or wrinkle to be seen. Mr. Trump, ever concerned with his audience size, addressed a few hundred spectators at an impromptu speech in Corpus Christi with, “What a crowd, what a turnout.” During his speech and news conference, he did not mention the dead, the suffering, the displaced, or the first responders. But he and Melania looked great.

It’s distasteful to mix politics with natural disasters. But why stop now. It is stomach-churning to see Donald Trump bring his toxic aura of self-fullness, soul-lessness, and ineptitude to a situation that, though tragic, brings out the best in Americans. Trump and humanity just don’t go together.

Did I mention his hat? The $40 USA hat he modeled, at several different Hurricane Harvey photo ops, that is for sale on his campaign website? An astute member of the fake news press core suggested sending that $40 to the Red Cross instead.

President Richard Nixon never hawked merchandise at a natural disaster. There has been, however, much discussion about other strong parallels between Donald Trump’s administration and Nixon’s Watergate saga. (Though it took six years for Nixon’s troubles to metastasize compared to Trump’s six months.) But more important, consider the parallels between the Missing White House Tapes satirical masterpiece and the comic potential of today’s administration, led by (my new catchphrase: say it together) the most vile, egomaniacal confidence artist ever to befoul a television screen.

In 1974, there were only three or four TV channels, remote controls were in their infancy, and the internet was just a gleam in its daddy’s eye. The National Lampoon album followed a typical channel surfer manually rotating the mechanical selector, skipping through (parodies of) the popular shows and well-known commercials of the day.

The Impeachment Day Parade was also in progress. The viewer goes in and out of highlights as she flips the channel knob in circles. Bored with the parade’s early floats, she switches to “Big Dick” learning how to spell l-y-i-n-g on “Sesame Street.” Big Dick also learns to count up to eight. (The Supreme Court ordered him to turn over eight secretly recorded Oval Office tapes, but he produced only seven.)

Switching to the next channel, she takes in the Lady Plumber “Ring around the collar” commercial. (NOTE: The “Plumbers” were a White House dirty tricks team commissioned to stop information leaks; they were responsible for the Watergate burglary. Herbert Kalmbach was Nixon’s attorney and shady moneyman.) She demonstrates to actor John Belushi the benefits of new “MexCabbage,” which helps to avoid dirty money:

[LADY PLUMBER]: “Sure is. You see, many kinds of improperly laundered funds leave embarrassing telltale traces in bank records, and can cause permanent stains on reputations.”

[LADY PLUMBER]: “But Mexican funds, with secret ingredient ITT, keep the White House clean while they prevent the dirt from getting out.”

[LADY PLUMBER]: “All it takes is just a few hundred thousand dollars a month and you can cover up even the worst mess. And thanks to its illegal political action, Mexican money goes to work where it counts, removing all evidence of crimes, greased palms, and dirty tricks in those hard to get at, high places.”

[LADY PLUMBER]: “Use laundered Mexican money — It really pays off!”

Substitute the word Russian for Mexican, and VEB (Russian state bank) for ITT, and this skit is as vibrant and relevant as it was in Nixon’s day. By the way, other Saturday Night Live alums such as Chevy Chase and Jane Curtain were members of National Lampoon and performed on this record. Also by the way, many of the other skits are just as applicable to the incompetence and corruption of Mr. Trump’s White House.

The short-attention-span television viewer goes on to flip through other classic commercials and TV shows of the ‘70s: “The Constitution Game” (which follows the presidential line of succession down to deputy assistant undersecretaries, trying to find an officeholder “clean” enough to assume the presidency); “Mission: Impeachable” (self-explanatory); Crest commercial (“Daddy! Daddy! I only got three cavities!” | “Well, that’s swell, Debbie, but I’m in the middle of a press conference.” | “Mr. Ziegler, uh, The Washington Post reports that your daughter had, in fact, 14 cavities. Care to comment?”); televised Senate Watergate hearings (“What did the president know, and when did he STOP knowing it?); and finally the closing moments of the Impeachment Day Parade (“Well that’s about it for America’s day of shame.”) with the Right Reverend Billy Graham performing the Swearing Out Ceremony (“Goddam you, Richard Nixon! You son of a bitch! You lied your ass off! Get the hell out of here! …”), and the switching on of the Eternal Microphone while a Marine bugler plays Wiretaps.

The Swearing Out Ceremony of President Donald Trump needs to be expedited. High-level Republicans have started to show some backbone in the past few weeks. A handful of GOP legislators have criticized Trump’s disgraceful pardon of convicted (of violating the Constitution) felon, former Arizona Sheriff Joe Arpaio. This was wrong on so many levels — three out of four political pundits (and dentists) agree.

National Economic Council Director Gary Cohn told the Financial Times that Trump “must do better in consistently and unequivocally” condemning hate groups. Secretary of State Rex Tillerson said that Trump “speaks for himself” when asked about the president’s Charlottesville remarks.  Defense Secretary James Mattis exhorted military members to “hold the line until our country gets back to respecting each other” and can “get the power of inspiration back” (the cause of lost inspirational power obviously being President Trump).

But the U.S. might not be able to hold on until this limited GOP scolding can have an effect. Republican legislators and leaders must “Just say no” to Trump (and drugs), now. We cannot wait around for Democratic articles of impeachment to crawl through Congress. Republicans — yes, Republicans — must begin calling for the president’s resignation in significant numbers. It can happen.

No one thought GOP lawmakers would support Nixon’s impeachment — that is until the damn broke after his “Saturday Night Live Massacre” (as Chris Matthews of MSNBC’s Hardball mistakenly called it in an excited moment). That’s when Nixon ordered his attorney general to fire the Watergate special prosecutor, because the kitchen was getting way too hot. The AG refused. Nixon ultimately had to fire his attorney general and his deputy attorney general before he could get solicitor general Robert Bork to sell his soul and do the deed.

Donald Trump will try to abort the Russia investigation by attempting to fire special counsel Robert Mueller. It’s inevitable. Trump’s White House kitchen already is overcome with heat, smoke, and sparks. I expect Republicans will come around when they finally see the flames. But they shouldn’t wait. Senate Majority Leader Mitch McConnell (R-Ky.) has expressed fears that the Trump presidency has caused irreparable damage to the GOP. Scores more whisper about it at cocktail parties and congressional coffee klatches. I implore you, Grand Old Party legislators and leaders, because we need two strong, respectable political parties: Republicans must put up a united front (like the parents of a recalcitrant child) and call for the president’s resignation. Now. ■