That Whole “Unable to Discharge the Duties of President” Thing, and Bob Corker 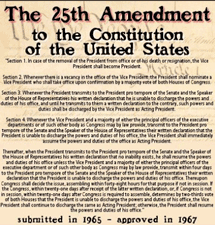 [The 25th and a ½ Amendment: presidential probationary period (just like McDonald’s)]

If Donald Trump were a job applicant for any position outside of his own family business, he likely could not get hired. If he did sneak by some unwitting HR manager, he would be canned long before his probationary period was up. Trump is a unique combination of incompetence and immorality. Yet just the right combination of Americans (though not a majority) voted to hire him as president.

What Were They Thinking?

The question, “What were they thinking?” has been asked and examined in every possible light. This quandary will be debated for decades, if not centuries. In office less than nine months, I suspect President Trump has secured the top spot on most presidential historians’ lists of all-time worst U.S. chief executives (though Doris Kearns Goodwin and Michael Beschloss probably won’t confirm this until after his ouster). The Donald has failed every test for presidential competency and ethical behavior.

The reasons for this fall into three primary categories: 1) financial corruption and use of the presidency to enrich himself; 2) likely collusion with the Russian government to get elected; and 3) obstructing justice, i.e., blocking the investigations of that likely Russian collusion.
A second tier of categories — evidencing legal though dangerously immoral reasons for President Trump’s unfitness for office — comprises blatant racism and sexism, ubiquitous mendacity, a colossal dearth of empathy, governance by narcissism (whatever makes him look good), governance by vindictiveness (whatever makes former President Obama look bad), governance by distraction (e.g., threatening war to distract from his failures and bad press), and sheer lack of intelligence and critical thinking.

What Have We Learned?

We’ve learned that Republican politicians with integrity are a small minority of the party. The majority of elected GOP officials have been presented with a plethora (good word) of reasons to abandon their support for the president. Nonetheless, they stick with him, apparently from fear of being “primaried” (losing their next GOP primary to a more-pro-Trumper). And also to get their tax cuts, for themselves and their wealthy donors.

There are, however, a number of reasonable, ethical Republican thinkers who are concerned about the future of their party and, more importantly, the country. Jennifer Rubin, Charlie Sykes, Bill Kristol, George Will, Nicolle Wallace, Steve Schmidt, Richard Painter, Ana Navarro, Max Boot, Rick Wilson, Mark Salter, David Frum, and others continue to tell the sad truth about the man who has kidnapped their party. Keep it up, my friends.

But it is the rare Republican truth-teller who occupies a seat in Congress. One of those is highly respected Senate foreign relations committee chair Bob Corker of Tennessee, though even Sen. Corker comes with a caveat. To paraphrase former (George W. Bush) White House communications director Nicolle Wallace on her cable news show this past week, the senator has swallowed the truth serum of retirement. He announced last month that he will not seek re-election in November 2018. No matter.

Sen. Corker has been one of the disgustingly few GOP congresspersons to say aloud what so many must be thinking. And the beautiful thing is he has over a year left to further call out Trump from his Republican Senate seat pulpit.

“[The White House is] in a downward spiral right now and [has] got to figure out a way to come to grips with all that’s happening. You know the shame of it is there’s a really good national security team in place … But the chaos that is being created by the lack of discipline is creating … a worrisome environment.”

“Sen. Bob Corker [R-Tenn.] suggested Wednesday that Gens. John Kelly and James Mattis, as well as Secretary of State Rex Tillerson are the ‘people that help separate our country from chaos,’ a stinging criticism of President Donald Trump from a man once considered an ally in Washington. Asked directly by a reporter whether he was referring to Trump in using the word ‘chaos,’ Corker … responded: ‘[Mattis, Kelly, and Tillerson] work very well together to make sure the policies we put forth around the world are sound and coherent. There are other people within the administration that don’t. I hope they stay because they’re valuable to the national security of our nation.’ … Re-read that last paragraph. The sitting Republican chairman of the Senate foreign relations committee is suggesting that if Tillerson was removed from office (or quit), the national security of the country would potentially be in danger. And he’s refusing to knock down — and thereby affirming — the idea that Trump is an agent of chaos who pushes policies that are not always ‘sound’ or ‘coherent.’ That. Is. Stunning.”

What else have we learned? That the Founding Fathers and 20th century legislators did not adequately think through that whole “President is unable to discharge the powers and duties of his office” thing.

There’s been a lot of talk about the Twenty-Fifth Amendment to the Constitution, especially the first paragraph of the last section (Section 4):

“Whenever the Vice President and a majority of either the principal officers of the executive departments or of such other body as Congress may by law provide, transmit to the President pro tempore of the Senate and the Speaker of the House of Representatives their written declaration that the President is unable to discharge the powers and duties of his office, the Vice President shall immediately assume the powers and duties of the office as Acting President.” (— italics added)

This means that Vice President Mike Pence and a majority of the other Trump sycophants in his Cabinet must get together and decide that Donald J. Trump is unfit for office, even though he’s not in a persistent vegetative state or suffering from screaming psychotic episodes (my apologies to psychotics). The amendment goes on to say that if the president disagrees (i.e., thinks he is still fit for the job), then two-thirds of both houses of Congress must agree to remove him from office.

President Trump could prompt a nuclear war, start a civil war, drain the Treasury (not the swamp), or cause another Great Depression before that will ever happen.

What the Founders and later Congress failed to plan for was the possibility of a Trump phenomenon in which a professional grifter could fool enough of the people enough of the time to get elected. He benefited from a perfect electoral storm of quirks and coincidences, along with massive foreign (and domestic) propaganda. He took over a major political party and is holding that party’s psyche hostage. He’s brainwashed a powerful minority of the electorate. And he is a very bad man.

The Twenty-Fifth Amendment needs a Section 5 that deals with a probationary period for the presidency, just like any other job in America. McDonald’s wouldn’t keep a burger flipper on the grill line after 30 days of exhibiting the characteristics that The Donald has. A waitstaff member at Trump Tower would have been let go within weeks of behaving as our president has. And I’m sorry to disparage burger flippers and waitstaff with the comparison.

Section 5 would put the new president on probation, by the American people. The standard probationary period in U.S. employment culture is 90 days. OK, we’ll double that for POTUS. A confirmatory election could be held the second Tuesday in July after each new president is inaugurated the first time. The voters who realized they were snowed by Donald Trump would have a face-saving way to correct their mistake. The Republicans who always vote GOP, no matter what, would have a second chance to realize there could be something worse than a Democrat in office.

Oh, and if the president doesn’t make it through probation, the runner-up candidate gets the job.

All seriousness aside, the only thing we have left is to promote a loud demand for President Trump’s resignation. If the (Senate Republican) Bob Corkers, Jeff Flakes, and John McCains of Washington would go a little further, we could hope for a call to step down, so deafening the president would be forced to heed it. Even Richard Nixon came to a point when a large enough loss of support prompted him do the right thing, if only to save face. (My apologies to President Nixon for the analogy.)

It’s never happened, you say? The country also has never seen the most vile, egomaniacal confidence artist ever to befoul a television screen make it to the Oval Office. ■