Nobody Knew That Repeal and Replace Could Be so Complicated 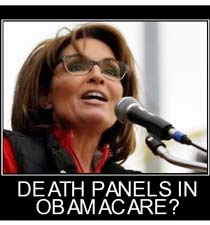 “The sick, the elderly, and the disabled will have to stand in front of Obama’s death panel so his bureaucrats can decide if they’re worthy of health care” (— Sarah Palin).

This week, Senate Republicans canceled the scheduled vote on their latest attempt to repeal the Affordable Care Act. The Graham-Cassidy bill had been on shaky ground for several days. After Sen. Susan Collins (R-Maine) joined Rand Paul (R-Ky.) and John McCain (R-Ariz.) by announcing her no vote on Monday, Graham, Cassidy, and Leader McConnell folded their hand. The bill could afford to lose no more than two Republicans or it was dead (all 48 Democratic caucus members had committed to vote no). Speculation has it there were also two or three undeclared Republican no’s.

This third (or fourth?) failure since President Trump’s election was significant because it was the Senate GOP majority’s (52-48) last chance to pass an Obamacare repeal by only 50 votes or more (50 plus VP Mike Pence’s tie-breaker) instead of a filibuster-proof 60 votes or more. A deadline materialized due to the Senate parliamentarian’s recent determination that after September 30, 2017, the bill could be filibustered by Democrats.

This leaves me with two questions: 1) Why this surprise, seemingly arbitrary cutoff date (apparently related to budget reconciliation and the fiscal year)? and 2) Why didn’t the Senate parliamentarian get her 15 minutes of fame?

But the far bigger question is, Why couldn’t the Republicans get it done? As everyone not on life support knows, GOP leaders and legislators have been promising America an Obamacare repeal since it was passed in 2010. They ran, raised large amounts of money, and were elected on this promise. During the time they had the House and Senate but not the White House, they made a show of sending dozens of bills to weaken or repeal O’care to President Obama’s desk knowing he would never sign them. But since they finally got the White House, too, in January 2017, they’ve tried and failed multiple times to get an ACA-kill bill to President Trump. Why did they fail?

It’s simple: The American people as a whole no longer believe the many lies they were told about the Affordable Care Act during and after its passage.

Young Democratic voters, you think they lied about Hillary!? The mendacity surrounding Obamacare was just as vicious and pernicious — because they hated Obama even more than Hillary, believe it or not.

There were so many falsehoods and misconceptions flying (I call this prevaricatum verbosium), it was extremely difficult for critical thinkers to keep up the debunking — very similar to today’s era of Trump. (OK. It’s hard to believe, but I guess the Trump era is worse.)

Let’s get this out of the way, first:

Republicans have touted this as the greatest lie since Bill Clinton averred, “I did not have sexual relations with that woman.” But Obama was not lying. At worst, he made a mistake. Furthermore, he was only half-wrong. His mistake was not accounting for the normal “churn rate” of employees and policyholders who switch jobs and insurance companies. A new job could certainly bring a new insurer who is obligated to meet the new (better) ACA minimum standards of coverage and has different eligible providers.

President Obama was half-right in that so-called grandfathered plans, in existence before March 23, 2010, did not have to meet all the new coverage requirements. Those insurers’ existing policyholders did not have to change anything — until and unless the insurer made significant changes to their plans or the employee changed jobs. Additionally, policies on the exchanges were new (not grandfathered) plans, so if you switched to one of those, coverage and providers could certainly change.

Barack Obama ultimately acknowledged his promise went too far. In a Nov. 7, 2013, NBC News interview with Chuck Todd, he offered the following apology: “I am sorry that [many Americans] are finding themselves in this situation based on assurances they got from me. We’ve got to work hard to make sure that they know we hear them and that we’re going to do everything we can to deal with folks who find themselves in a tough position as a consequence of this.”

Now that we’ve cleared that up, let’s reminisce about the following intentional lies concerning Obamacare:

DEATH PANELS: “The sick, the elderly, and the disabled … will have to stand in front of Obama’s ‘death panel’ so his bureaucrats can decide, based on a subjective judgment of their ‘level of productivity in society,’ whether they are worthy of health care.”

FORCED BENEFIT OPTIONS, FREE HEALTH CARE FOR UNDOCUMENTED: “Page 42: The ‘Health Choices Commissioner’ will decide health benefits for you. You will have no choice. … Page 50: All non-U.S. citizens, illegal or not, will be provided with free health care services.”

JOB LOSSES: “75 percent of small businesses now say they are going to be forced to either fire workers or cut their hours.”

MUSLIMS EXEMPT: “Obamacare … on page 107 … allows the establishment of Dhimmitude and Sharia Muslim diktat in the United States. Muslims are specifically exempted from the government mandate to purchase insurance, and also from the penalty tax for being uninsured.”

TAX INCREASES: “Obamacare is … the largest tax increase in the history of the world.”

Had enough? All of these have been thoroughly disproved, many without much effort. And I didn’t even document at least this many other widespread myths and false predictions such as the following: Congress is exempt from Obamacare; people over age 76 are not eligible for cancer treatment; Americans won’t enroll, and if they do they won’t pay their premiums; there is a 3.8 percent sales tax on all real estate transactions; it will kill the economy; sporting goods are taxed as medical devices; it won’t reduce the uninsured rate; it’s a government takeover of one-sixth of the economy; your sex life will be questioned; it will lead to higher deficits; the government will allow forced home inspections; it was rammed through Congress in a hurry, with no GOP participation; Obamacare is som; etc.

Keep in mind that many different anti-Obama zealots on many right-wing media platforms repeated these myths, lies, and misconceptions incessantly. Consequently, legitimate media outlets felt obligated to report on the misconceptions, giving them even more attention.

Again, Why Did Obamacare Repeal Fail?

In the first couple of years after Congress passed the ACA, two factors supported the repeal effort: 1) too many Americans still believed the fallacious propaganda; and 2) not enough people had seen the benefits of the bill. Unfortunately, repeated, repetitious, and redundant repeating of lies works: large numbers of people begin believing them despite logical, factual refutations. Doubly unfortunately, Republicans as a whole have no compunction about taking advantage of that fact. This was how W. got us into the Iraq War. This was how they disguised torture as “enhanced interrogation techniques.” This was how they defeated presidential candidate Hillary Clinton. And this was how they almost defeated, then almost repealed, the Affordable Care Act.

In the early days, the battle cry was simply “Repeal.” There was nothing to replace because, as noted, not enough people had experienced any real benefits yet. After a few years, however, Republicans were forced to adjust their slogan to “Repeal and Replace.” More and more Americans began realizing the GOP had lied to them and that the ACA actually helped many people.

As the 2016 presidential campaign unfolded, millions of Americans were benefiting from Obamacare, and Republicans had to keep sweetening the Repeal and Replace deal. Then Donald Trump came along and made intentionally false promises that caused GOP leaders’ heads to explode:

“We’re going to have insurance for everybody. There was a philosophy in some circles that if you can’t pay for it, you don’t get it. That’s not going to happen with us. [People covered under Obamacare] can expect to have great health care. It will be in a much-simplified form. Much less expensive, and much better.”

(Trump, Donald, R-N.Y., U.S. president-elect; as cited in Costa, Robert & Goldstein, Amy; “Trump Vows ‘Insurance for Everybody’ in Obamacare Replacement Plan”; The Washington Post [and many other instances]; 1/15/2017.)

This is why Repeal and Replace has failed: Because the only way the GOP could have kept even their minimal commitments was with a health care system that looked a lot like Obamacare. And no matter how much Mitch McConnell, Donald Trump, Paul Ryan et al. lied to us by saying their last three or four health care bills fulfilled anything near those commitments, the American people finally saw through it. When citizens were threatened with losing the health care they had finally gained, they organized, they protested, and they swayed the moral sensibilities of enough Republican senators to do the right thing. Now Republicans are compelled to work with Democrats to fix the ACA (as President Obama and Democrats have always promoted) instead of killing it.

Back in the late 1980s and early ‘90s, Apple sued Microsoft for stealing the concept of “windows” for computer operating systems. (They sued, even though Apple stole the idea — and the idea for the “mouse” — from Xerox PARC in 1979.) Windows was a layperson’s term for a “graphical user interface” or GUI. It was a complicated settlement, but Microsoft essentially won based upon the judge’s (and his technical advisers’) opinion that any GUI would have to look like some form of graphic windows opening and closing.

And so it is with health care. If you want to maximize the number of Americans with affordable health care coverage — without going to a single-payer system — it hinges on three things: 1) individual mandate (everyone must buy in); 2) subsidies for those who can’t afford full price; and 3) elimination of pre-existing condition preclusions. In other words, it must look a lot like the Affordable Care Act. The people learned that in spite of the lies. And at least three GOP senators learned that.

Nobody knew that repealing and replacing Obamacare could be so complicated. ■