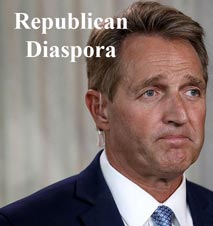 [Anti-Trump Republicans are fleeing or being pushed out of the party’s new, Trumpian mainstream]

For all the discussion of Republicans complicit in the evils of Donald Trump’s policies and procedures, it’s important to note those who have spoken out, against the president’s atrocities and about his unfitness for office. They are either fleeing or being pushed out of the party’s new, Trumpian mainstream. These members of the Republican diaspora have been willing to risk a lot. Those holding office are risking any future elected or appointed positions within the party.

Those conservative pundits, think tank notables, and former high-level staffers consistently critical of Donald risk being frozen out of mainstream GOP information flow and Washington dinner party invitations, as well as incurring presidential Twitter attacks. It’s easy for Democrats and independents to forget how strong Mr. Trump’s party support is. We’re used to hearing about the president’s sturdy base of 30-something percent. But the often-surprising, mystifying statistic is that his backing of self-identified Republicans remains in the 80s.

There will be treatises written about how The Donald held onto as much support as he has, with no one answer. His clearly racist, anti-immigration principles attract a large portion of his loyal supporters, though it’s difficult to measure specifically because there are so many shades. There are the obvious racists and xenophobes — the white nationalists. There are the in-the-closet bigots who latch onto Mr. Trump’s dog-whistling and policies that thinly disguise the president’s intentions — the “White Lives Matter” crowd. And there are those who blindly go along with their tribe or don’t admit their bigotry to themselves — the “All Lives Matter” crowd. The total of these groups accounts for a huge bite of that 80-something percent.

We have the white evangelicals who’ve taken rationalization to dizzying heights. They now support the most immoral person elected president since abolition. They don’t see or care that Trump opportunistically glommed onto their pet issues just in time to launch his campaign. They only care about opposition to pro-choice and gay rights, “religious freedom,” and the newly appointed judges who will support those views. They overlook the racism. They have tacitly agreed to accept the rampant adultery, sexual harassment, adult-film star and prostitute dalliances, and admissions of sexual assault. They have laughably defended Mrs. Trump’s soft-porn nude photos as akin to biblical examples of nature’s beauty, and compared Roy Moore (Trump’s candidate for Alabama senator) and his dating and assaulting of minor teenage girls to Jesus’ stepfather, Joseph.

Then you have the so-called small-government conservatives. These are people like House Speaker Paul Ryan, the House Freedom Caucus, and even “traditional” Republicans who push through trillion-dollar-plus tax cuts for the rich (poorly disguised as tax reform and middle-class tax relief). Then they tell us the national debt is too high so we must cut “entitlements,” such as Medicare, Medicaid, the Affordable Care Act, Children’s Health Insurance Program, unemployment insurance, and the Salvation Army soup line. (I might have exaggerated that last point.)

Essentially, they believe in cutting revenues (taxes, etc.) to force the cutting of government services. They do this with little concern for any social safety net that, as I said last week, the wealthy and corporations should be obligated to support because of the benefits they’ve garnered through American infrastructure, compound interest, and silver-spoon births. They also want to cut government research and regulatory administration, which protect citizens from things like poisonous food and medicine, suicide-trap cars, contaminated drinking water, unbreathable air, and an ozone layerless atmosphere. To them, these are pesky job-killing (read: profit-trimming) regulations.

The upshot is that all the different far-right factions get what they want from Trump as long as they ignore his attacks on American democracy, which they’re perfectly willing to do.

The number of GOP legislators who have decided not to seek re-election in 2018 is up to about 37 and rising. Each one has their reasons, but we can surmise the majority don’t believe they can win either their primary or general. Of that group, I believe some made the noble calculation that they could have won but only if they were willing to prostitute their principles and cozy up to President Trump — which they chose not to do.

Consider the sentiments of one in the latter category, Sen. Jeff Flake (R-Ariz.):

“‘The enemy of the people,’ was what the president of the United States called the free press in 2017.

“Mr. President, it is a testament to the condition of our democracy that our own president uses words infamously spoken by Josef Stalin to describe his enemies. It bears noting that so fraught with malice was the phrase ‘enemy of the people,’ that even Nikita Khrushchev forbade its use, telling the Soviet Communist Party that the phrase had been introduced by Stalin for the purpose of ‘annihilating such individuals’ who disagreed with the supreme leader.

“This alone should be a source of great shame for us in this body, especially for those of us in the president’s party. For they are shameful, repulsive statements. And, of course, the president has it precisely backward – despotism is the enemy of the people. The free press is the despot’s enemy, which makes the free press the guardian of democracy. When a figure in power reflexively calls any press that doesn’t suit him ‘fake news,’ it is that person who should be the figure of suspicion, not the press.”

Sen. Flake has been the most vociferous Republican critic of the president in Congress. You might remember his Senate floor speech last October announcing his decision not to seek re-election because he didn’t feel there was a place for traditional conservatives like him in today’s (Trump’s) Republican Party. In that speech, Flake said he “will not be complicit” in allowing the president to compromise “American values” and “moral authority,” and that the president has caused an “alarming and dangerous state of affairs.” Mr. Flake also released a book last year, Conscience of a Conservative, in which he was highly critical of the president.

So, good for Jeff. Among current and former GOP officeholders, he’s spoken the most and loudest about the damage Donald is doing to American democracy. But some critics say he could and should have done more. Political integrity is often relative.

In his book, Sen. Flake chastised pre-candidate Trump for his birther initiative. Flake also claimed to have “done enough” at the time in speaking up about Donald’s thinly disguised racist lies. I’m sorry, Sen. Flake. I don’t remember you speaking up very loudly. If you had, you would have been a household name back then because almost no Republicans spoke up. I’m sorry: You did not do enough to disavow the Trumpian birther conspiracy while it was in progress.

The big problem for GOP members during the 2012 election cycle (when Sen. Flake won his seat) was that many were on board with Trump’s evil fairy tale. But even the “respectable” ones — who knew the conspiracy story was a lie — would not denounce Trump or repudiate the falsehoods. They tried to straddle the fence with their silence. They chose not to speak out, which would have alienated the true birther believers. Simultaneously, this allowed them to pander to reasonable Republicans and swing voters by not vocalizing support for the crackpot theories. In the end, they gave tacit approval to the campaign of lies. And they lost control of their party.

GOP Never-Trumpers Could Do More

The other thing you could do right now, Sen. Flake, is call for President Trump’s resignation; call for his impeachment. The same goes for other Never-Trumpers: Sen. Bob Corker (R-Tenn.) (who also has chosen not to run for re-election); Sen. Ben Sasse (R-Neb.); 2012 GOP presidential candidate Mitt Romney; and Gov. John Kasich (R-Ohio); all of whom have publicly questioned the president’s fitness for office.

If you guys really believe your party is in free-fall and the president is a danger to the country, go all the way: Call on him to resign. Call on your party to begin the impeachment process. Take a real risk. Sure, the success of these calls is a long shot right now, but the act of making them is imperative. It has to start with a prominent Republican somewhere, just as Sen. Edward Brooke (R-Mass.) was the first Republican legislator to call for President Richard Nixon’s resignation during the Watergate era.

Other notable GOP legislators who have expressed discomfort with President Trump at one time or another are Rep. Charlie Dent (R-Pa.) and Sen. John McCain (R-Ariz.). Honorable Mentions include Sens. Lindsay Graham (R-S.C.) and Dean Heller (R-Neb.).

Yes, it’s slim pickings. And even the heartiest of congressional Republican Trump opponents are not always consistent in their opposition to the president. They have sometimes used him or capitulated to him if their interests called for it.

But relatively speaking, Democrats and independents must support the GOP Never-Trumpers. This batch of unevenly brave Republicans is all we have in office right now. And we must reinforce the good behavior. If your dog doesn’t come right away when you call, you don’t scold him when he finally gets there. If you do, he’s less likely to come next time — ‘cause he’s learned a scolding is waiting for him. You praise old Fido even if he comes late, which makes him more likely to call for the president’s resignation next time.

George Will, Jennifer Rubin, Charlie Sykes, Steve Schmidt. These are prominent anti-Trump conservative pundit members of the Republican diaspora. (Will and Sykes have officially left the GOP to become “independent conservatives.”) They all believe Donald is grossly unfit for the presidency. They will be important drivers of any successful effort to rid our government of President Trump and reunite their party. To their credit, they publicly acknowledge the dangerous governing philosophies, methods, and incompetency of the Trump presidency, even without the specter of criminal behavior that Special Counsel Bob Mueller is likely to turn up.

Hats off to non-officeholder GOP luminaries such as Max Boot (former Romney adviser and Sr. Fellow at the Council on Foreign Relations), Evan McMullin (former CIA operations officer, former chief adviser to the House Republican Conference and House Committee on Foreign Affairs, Independent 2016 presidential candidate), and David Frum (former George W. Bush speechwriter and senior editor at The Atlantic). Unequivocal conservative anti-Trump voices like these are integral to the cause.

Tons of credit also must go to the dedicated investigative reporters. It’s not just The Washington Post, The New York Times, and the National Enquirer anymore. The internet has its pros and cons. But a major pro is the birth of many legitimate digital media publications, now with their own editorial and investigative reporting staffs.

Like I said: thank God for new media and more investigative reporting. ■