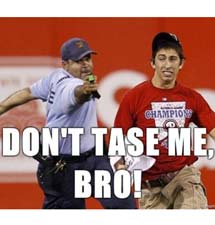 The phrase “DO NOT CONGRATULATE” is destined to take its place among other Top 10 American pop cultural catchphrases such as “Don’t tase me, Bro!” and “You know, I’m, like, a smart person.”

“When the full extent of your venality, moral turpitude, and political corruption becomes known, you will take your rightful place as a disgraced demagogue in the dustbin of history. You may scapegoat Andy McCabe, but you will not destroy America. America will triumph over you.”

“Reluctantly I have concluded that President Trump is a serious threat to U.S. national security. He is refusing to protect vital U.S. interests from active Russian attacks. It is apparent that he is for some unknown reason under the sway of Mr. Putin.”

“I had a call with President Putin and congratulated him on the victory, his electoral victory.”

The phrase DO NOT CONGRATULATE is destined to take its place among other Top 10 American pop cultural catchphrases such as “Don’t tase me, Bro!” (Univ. of Fla. student Andrew Meyer); “You know, I’m, like, a smart person” (President Trump); and “I know words, I have the best words” (Donald, again).

Actually, I’m seeing this settle in over time as “DON’T CONGRATULATE, Bro!” You heard it here first.

“Bro” has been popularly appended to myriad imperative statements since the 2007 incident in which a University of Florida student was — some say unnecessarily — subdued by a taser in “drive stun” mode. His questions apparently became rowdy at a Constitution Day forum featuring Sen. John Kerry. The student’s now-classic, caught-on-video, in-vain plea of “Don’t tase me, Bro!” came just before university police took him down and removed him.

The directive DO NOT CONGRATULATE will go down as a symbol of another Donald Trump middle finger to his staff, the American people, and Western allies — and a kiss on the cheek to Putin.

“DON’T CONGRATULATE, Bro!” It has a nice ring.

“In Mr. Obama’s case, said Michael A. McFaul, [Obama’s] ambassador to Moscow, … there was lively internal debate about whether, and when, the president should make that call. Mr. Obama waited several days after Mr. Putin’s election in March 2012 before calling.

“After that election, the State Department issued a statement in which it said, ‘The United States congratulates the Russian people on the completion of the presidential elections, and looks forward to working with the president-elect after the results are certified and he is sworn in.’ The language, Mr. McFaul said, was carefully chosen to applaud the Russian people for voting without praising Mr. Putin for winning.”

You could say Ambassador McFaul is splitting hairs. You could also say Obama’s foreign policy team debated the issue and came to an intelligent consensus about the proper message to send based upon world circumstances at the time. Note that Russia hadn’t yet annexed the Crimean Peninsula; Putin hadn’t had one of only two viable political rivals assassinated, and the other one jailed and disqualified; there hadn’t been widespread circulation of video exposing Russian ballot-box-stuffing; Russia hadn’t been implicated in two attempted nerve-agent murders on U.K. soil; and it wasn’t universally believed that Putin had altered a recent U.S. presidential election by conducting a digital war of disinformation and cyberattacks.

So just maybe, Obama’s team had strategic reasons to give a carefully worded statement of quasi-congrats in 2012. In 2018, Trump’s team specifically, unanimously said “DO NOT CONGRATULATE,” and he did it anyway.

Interestingly, we know about Trump’s call to Putin because the Kremlin released the news (in addition to ubiquitous White House leakage). This continues a pattern of contacts between Russia and the U.S. that become known primarily because of a Kremlin anxious to tout them.

So the White House admitted the call. U.S. legislators and pundits — even Republicans — were aghast at President Trump’s fawning congratulations offered to Putin for his sham election victory, ignoring the across-the-board counsel and all-caps directive from his U.S. national security team. In the briefing room, reporters asked if the president thought the Russian election was conducted freely and fairly. The White House press secretary answered a different question:

“We don’t get to dictate how other countries operate. What we do know is that Putin has been elected in their country, and that’s not something that we can dictate to them, how they operate. We can only focus on the freeness and the fairness of our elections — something we 100-percent fully support.”

Besides the 100-percent, full support of “the freeness and the fairness of our elections,” Sanders also reiterated the White House’s continued backing for not drowning puppies and not stealing candy from babies (— writer’s embellishment).

Another Day, Another Lawsuit

It’s been a busy week for the Trump legal team.

Remember that Stephanie Clifford, known professionally as Stormy Daniels, sued the president March 6, 2018, to be released from the nondisclosure agreement she signed with Trump personal lawyer Michael Cohen. Stephanie’s profession is adult-film actress. The NDA was brokered less than two weeks before Election Day 2016. The information not to be disclosed was and is the story of Donald’s sexual dalliance (and successive attempted dalliances) with Stormy in 2006, beginning shortly after Melania had given birth to Barron. Stormy’s grounds for breaking the agreement are that Trump never signed the document, though his pseudonym (David Dennison) was typed in along with a blank signature line underneath.

Donald is keeping mum. His attorney says there was no hookup with Stormy even though he paid the hush money. In fact, Michael Cohen maintains he handled the NDA and the money all on his own, and that Mr. Trump is not the client party to the agreement. So Michael Cohen paid a woman for her silence about a relationship that never happened. And it never happened with Donald Trump.

Let’s not feel sorry for Stormy. Cohen paid her $130,000 to keep quiet. If she wins in court, she’ll probably get millions for her story.

On Friday, Stormy’s attorney, Michael Avenatti, made the cable news rounds to allege a Trump representative had physically threatened her at some point. (Cohen has a history of threatening opponents.)

Also Friday, the president’s lawyers filed suit against Stormy for $20 million for breach of the NDA. That is, they’re suing her for discussing an affair they say never happened. Apparently they’ve counted 20 times, at $1 million apiece, that Stormy has mentioned or hinted at the affair (the affair that never happened) over her last few weeks of television appearances. They’re also trying to move the case to federal court where, presumably, Trump-appointed judges will be more sympathetic to the president.

On Tuesday, former Playboy Playmate of the Year Karen McDougal sued American Media Inc., the parent company of the National Enquirer, to break her NDA. It seems they purchased her story of a 2006-2007 affair with Trump in 2016, then didn’t run the story. In tabloid industry parlance, this is called “catch and kill.” David Pecker, head of American Media and close friend of Donald Trump, caught the story by buying the rights from McDougal with the NDA, then killed it by not running it in his publication. McDougal alleges her then-lawyer secretly negotiated with Michael Cohen and David Pecker to keep the story buried and defraud her.

Also Tuesday, Stormy’s attorney announced that she passed a lie detector test in 2011 with 99-percent accuracy concerning key questions regarding sexual intercourse with The Donald. InTouch magazine interviewed and vetted Ms. Daniels for this story in 2011 but they shelved it after Trump’s legal team threatened the publishers with a lawsuit. As we all know, lie detector tests are rarely allowed in court, but they are always allowed in the court of public opinion.

Additionally on Tuesday, Trump’s attorneys lost their attempt to stop former The Apprentice contestant Summer Zervos’ defamation suit against the president from proceeding. Zervos is one of about 19 women who came forward during the presidential campaign with credible stories of unwanted touching, groping, and kissing by Donald. Apparently the statute of limitations has run out on the sexual assault charges, so Zervos’ attorneys are suing for defamation based on Trump’s campaign statements that all of those women are “liars” and “horrible, horrible people.” In New York, Judge Jennifer Schecter ruled, “No one is above the law. It is settled that the president of the United States has no immunity and is ‘subject to the laws’ for purely private acts.”

Observers are looking forward to discovery and presidential depositions.

In his private business world, Donald has always been able to plug pesky leaks with the sealing power of his legal budget and the absorbent strength of NDAs. He figures, Why should running the government be any different? Ruth Marcus reported Sunday in The Washington Post that the president has required White House staff to sign nondisclosure agreements that would stay in effect beyond his time in office. Their enforceability remains to be seen. Along with Stormy’s and Karen’s.

Donald, possessing zero government experience and no desire to learn, is still trying to run the country as he runs his business — recklessly and autocratically. He’s failing. Billionaires like Warren Buffett or Bill Gates might have had success in the Oval Office because they have that desire to learn what they don’t know, and a sense of knowing what they don’t know. Additionally, Buffett and Gates are people of character, integrity, and intelligence. Mr. Trump is also a billionaire.

One thing is certain: As Donald sinks deeper into the snake pit of his own making, his legal adversaries become stronger and more determined. Yeah, some of them are out for the money. But some are out to stop an immoral actor from doing more damage — and the money. Many pundits think Stormy Daniels might be the one to bring Trump down by outwitting him in the legal and media arenas. She could be our backup. Special Counsel Bob Mueller might find the president innocent of conspiracy, corruption, and obstruction of justice. And monkeys might fly out of my butt (— thanks to Wayne Campbell aka Mike Myers).

As Trump degenerates, his critics become more emboldened and outraged (except for invertebrate GOP leaders in Congress). Finally, highly credible U.S. government officials are saying aloud what serious news consumers have believed for a long time. Mike Morell (former CIA deputy director), Jim Clapper (former director of national intelligence), John Brennan (former CIA director), and Barry McCaffrey (retired four-star U.S. Army general) all believe Donald Trump likely has been compromised by the president of Russia. “It is apparent that he is for some unknown reason under the sway of Mr. Putin.”

Independent high-ranking American patriots like Brennan and McCaffrey are calling out the dangerous confidence artist: “President Trump is a serious threat to U.S. national security”; “You will take your rightful place as a disgraced demagogue in the dustbin of history”; “You will not destroy America, America will triumph over you.”

You can bet also the words venality and turpitude will be ranking high this month on Merriam-Webster.com’s “Trending Now” list. ■