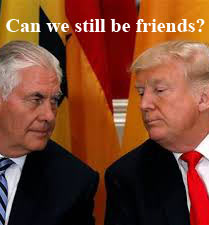 “This Cabinet has become a Cabinet of sycophancy, bobble-headed dolls, and flattery.”

Secretary of State Rex Tillerson was finishing a five-nation African tour of Kenya, Chad, Nigeria, Djibouti, and Ethiopia. NBC News’ Andrea Mitchell said the press corps had been calling it the “Sh**hole Apology Tour” in reference to President Trump’s January characterization of Haiti, El Salvador, and countries of Africa as “sh**hole countries.” Tillerson indeed had been attempting to smooth over concerns about how Mr. Trump views them.

The secretary returned home a day earlier than expected after being summoned by the White House. Rex’s plane touched down on U.S. runway pavement Tuesday at about 4 a.m. He had planned to meet with the president later that day. At 8:44 a.m., Donald tweet-fired him. Aides advised Rex of his surprise termination (Tillerson does not use Twitter). Around noon, Chief of Staff John Kelly convinced the president to call Tillerson personally. Shortly thereafter, Rex held an emotional press conference announcing his departure, reviewing his successes, thanking his State Department personnel, and conspicuously not thanking President Trump.

Reportedly Trump was so anxious to fire Tillerson, he wanted to do it while Tillerson was still in Africa. John Kelly convinced the president to wait until the secretary returned home. Trump waited about three hours after Rex’s return. Also reportedly, Chief of Staff Kelly was incensed, enraged, foaming, fuming, choleric, and many other synonyms for (very) angry at the way Donald did Rex. (A point for John Kelly.) What Kelly did beyond fuming is unknown.

At a Q&A with reporters shortly after he tweet-fired Rex — but before he (or any other White House official) had called Mr. Tillerson with a personal message of termination — President Trump said, “We got along actually quite well, but we disagreed on things.” He said he respected Tillerson’s “intellect” but “we were not really thinking the same.” Donald added, “Rex and I have been talking about this for a long time. … I made that decision by myself. I think Rex will be much happier now.”

The president then turned to the camera and said, “Rex, I’m sorry. You deserve someone so much better. It’s not you, it’s me.” (— writer’s embellishment)

President Trump is a cowardly adolescent who breaks up with his squeeze (Do they still use that term?) via Twitter because he doesn’t have the courage or decency to face the person. Then right after the Dear John tweet (Another outdated reference?), he spreads his side of the story all around middle school: “Rex and I have been talking about this for a long time. … I made that decision by myself. I think Rex will be much happier now.”

Only after Donald’s mother — I mean, his chief of staff — gets wind of how it all went down is the kid forced to feign belated decency and call, after Rex has been inconsolable for over three hours and the news is all over school.

To be fair, Rex did call Donald a “f***ing moron” behind his back last October after Nuclear Weapons 101 class. When queried about this by the school newspaper, Rex said he wouldn’t dignify the question with a response — that is, he refused to deny it.

Forget the criminality, conspiracy, and corruption for a moment (just for a moment) — Trump is a hypocritical phony, coward, bully, and contemptuous human being. In a word: a**hole.

Allison Janney played C. J. Cregg, press secretary and later chief of staff in the well-known fictional White House drama series The West Wing, created by Aaron Sorkin. C. J. was known (among other characters) for her snappy, rapid-fire dialogue and deep knowledge of policy issues. In a recent interview, Fresh Air’s Terry Gross asked Janney if playing this part made her more knowledgeable about government and politics. Janney admitted that no, her dialogue didn’t help with that at all; she did not know or care much about politics at the time. Her talent simply was in memorizing the lines and acting the part.

This is one difference between Allison Janney and Donald Trump, who thought he was his TV character. Mr. Trump rose to fame on his long-running “reality” show, The Apprentice (and its offshoots: The Celebrity Apprentice, The New Celebrity Apprentice, The Golden Showers Apprentice, etc.). Apparently, the show’s catchphrase and most exciting moments were when Donald averred, “You’re fired,” to a contestant. (I’m proud to say I’ve never seen a single episode or segment, only the occasional clip on a cable news show.)

In my Detroit area youth there was a brand of professional wrestling called Big Time Wrestling, with the likes of competitors named Leapin’ Larry Shane, Dick the Bruiser, and The Sheik. Unbeknownst to us kids, the match outcomes were set ahead of time: sometimes they scheduled Leapin’ Larry to win, sometimes The Sheik. Like Big Time Wrestling, the storylines of The Apprentice were completely orchestrated. Trump’s winners — and those losers on the receiving end of his “You’re fired” dialogue — were predetermined by scriptwriters. Donald playacted the savvy executive and never was required to summon the actual courage (and decency) it takes to terminate someone professionally.

Like Big Time Wrestling fans, most of The Apprentice fans believed their show was real, not foreordained. And Trump never discouraged that.

But now, on the world’s biggest stage — the presidency — the truth is out: Donald is a phony and a coward who does not have the courage to face a fellow professional, eye-to-eye, and tell him (or her) it’s not working out. Keep in mind this is not a Papadopoulos coffee boy we’re talking about. The secretary of state is fourth in line of presidential succession, behind only the VP, speaker of the house, and Senate president pro tem.

Remember, too, that Trump fired James Comey — top dog at the greatest law enforcement and intelligence agency in the world — by sending a messenger to Comey’s office, knowing he was out of town. Mr. Comey found out by seeing the headline flash across a muted television while he was speaking to FBI agents in Los Angeles. Comey thought his Bureau buds were playing a prank on him.

Donald loves television and Twitter. He’s the modern-day Being There president, who accumulates all his knowledge of the world through (Fox News) TV. But unlike Chance the Gardener, Trump revels in humiliating subordinates. He thrives on demeaning those with whom he is finished. Like the colossally insecure narcissist that he is, Donald Trump lifts himself up by cutting others down. Sad.

One more classy Trump anecdote? He reportedly sent second wife Marla Maples the message that he was divorcing her through a headline in the New York Post.

Trump, however, only fires or divorces someone as a last resort. He still functions as a spoiled, immature rich kid whose mother always bailed him out of uncomfortable situations and enabled his galactic irresponsibility. Donald’s tactics are to humiliate the department head or wife over time, to make them so miserable that they finally quit the organization or leave the marriage. In this way, he’s never been required to develop those elements of manhood he so sorely lacks: courage and decency. If the Comeys, Tillersons, and Mapleses in his orbit don’t get the message soon enough, they’re in for a humiliating, nationally broadcast defenestration.

Unlike Bush-Obama holdover James Comey, President Trump hired Rex Tillerson. The New Yorker broke the story that Trump originally preferred Russia hawk Mitt Romney for State, but Vladimir Putin nixed that idea. So Trump went with Putin buddy Rex Tillerson, who had struck several large business deals with the Russian president in his role as ExxonMobil CEO. Tillerson had no experience in government or diplomacy and had never met Donald. But he took the job because his wife told him God wanted him to do it.

Ironically, Tillerson ended up seeing the facts over time and turning against Russia for several reasons. This culminated with a Monday night statement from Rex — his first public denouncement of that country — confirming and condemning the Russian attempted murders in the U.K., condemning their cyberattacks, accusing Putin of little cooperation in solving world problems, and pointing out Russia’s distinct pivot toward global aggressiveness. Tuesday morning, Rex was out.

In Donald’s eyes, this blatant Putin insult meant Tillerson had to go. Plus that “f***ing moron” thing.

Rex Tillerson, apparently, will go down as one of the worst secretaries of state in American history, according to pundits and experts I respect. He allowed Trump to force the drastic shrinking and weakening of the State Department without fighting for its budget. He left numerous key positions unfilled. He isolated himself from career experts in the department and marginalized them.

Still, we feel sorry for ol’ Rex. Only Trump can make us sympathize with high-level government officials whom we would normally disparage for having grossly underperformed in their positions. I’m thinking also of oft-Trump-maligned Attorney General Jeff Sessions, former Chief of Staff Reince Priebus, and Communications Director-for-11-days Anthony Scaramucci aka “The Mooch” — no, wait — Scaramucci got his.

Donald Trump is the consummate a**hole we all knew in high school, the seemingly uber-confident braggart and bully whom we all despised and knew was desperately covering up a mountain of insecurity. Trump was the class jerk who gave everyone disparaging nicknames, towel-snapped the weaker guys in the locker room, and belittled the girls who wore braces or were otherwise less than “8’s.” He was the husky goon who slammed you into hall lockers. He was the unfunny clown, the pseudo-Mr. Cool who always fought off any teammate who might try to get between him and his coveted No. 69, when football jerseys were distributed at the beginning of each season.

Incomprehensibly, nothing seemed to stick to the guy. He always was able to slither his way out of trouble with the coach, teacher, assistant principal, etc. Nobody ever was able to get the best of him or tag a derogatory nickname. He never got what was coming to him. And he often dated the “10’s.” Of course, Daddy’s money and fancy cars didn’t hurt in this area. Doubly incomprehensibly, he always had a large contingent of hangers-on. He would mix up the spark plug wires on the sad nerd’s car, laugh at the girl with acne, and mock the kid with a limp, all to the cheers of his posse.

Now he’s our president. What the hell!?

But wait. Now he’s our first president to have a special counsel subpoena documents from his personal family business while being investigated for high crimes and misdemeanors. The New York Times reported this week that Bob Mueller has sought Russia-related and other documents from the Trump organization from since and before his campaign launch. For the first time, Mueller is inside Trump’s C-suite — and he’s clearly inside Trump’s head. Pundits have speculated this breach by Mueller is the cause of the president’s recent manic firings and more-impulsive-than-usual decisions.

Donald is our first president to be probed, personally, for conspiracy with a foreign adversary to alter an election, obstruction of justice to cover up that conspiracy, enriching himself and his family through the presidency, and other high crimes. He is the first pure a**holean president. And he will resign the office with his tail between his legs and possibly spend time in prison.