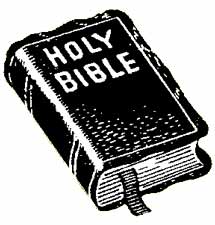 We have an election coming up in two weeks. President Trump says even though his name is not on the ballot, he’s on the ballot. He’s telling supporters that when they pull the lever for members of Congress, they’re really voting for or against him. The president is essentially correct on this point. A vote for Democratic legislators is a vote to rein in Donald’s incompetence, corruption, amorality, and damage to the country and presidency. A vote for Republican legislators is a vote to continue enabling the incompetence, corruption, and damage.

In 2016, 81 percent of Caucasian evangelicals voted for Donald J. Trump.

Evangelicals, be sure to vote your values again.

“Thou shalt not kill.”

“You’ve got one [dead] journalist. … You’ve got $100 billion worth of arms sales. … You don’t blow up an international alliance over one person. I mean, I’m sorry.”

“Thou shalt not commit adultery.”

“We kind of gave him — ‘All right [President Trump], you get a mulligan. You get a do-over here [for your affair with and payoff of adult-film actress Stormy Daniels].

“Thou shalt not bear false witness against thy neighbor.”

“It’s just a shame that … somebody can bring something up that [Judge Kavanaugh] did as a teenager close to 40 years ago. That’s not relevant. … Regardless if it was true, these are two teenagers and she said no and he respected that so I don’t know what the issue is.”

“[Franklin] Graham, son of the Rev. Billy Graham and current president of his Evangelistic Association, said he saw no reason to believe the allegations about Trump and Stormy Daniels, nor the reports that the president called certain countries ‘sh**holes,’ despite the fact Trump reportedly bragged about saying it in private phone calls.”

“On Sept. 7, [2018,] President Trump … made 125 false or misleading statements — in a period of time that totaled only about 120 minutes. It was a new single-day high. … Trump’s tsunami of untruths helped push the count in The Fact Checker’s database past 5,000 on the 601st day of his presidency.”

“Ralph Reed, a conservative Christian activist and the head of Trump’s religious advisory board, said that as the father of two daughters, he was disappointed by the ‘inappropriate’ comments. But people of faith are voting on issues like who will protect unborn life, defend religious freedom, grow the economy, appoint conservative judges, and oppose the Iran nuclear deal.”

A few years ago, as a product of some personal religious history research, I put together a succinct list of principles espoused in the Bible. Since evangelicals insist that every word in the Bible was “written” by Jesus, I named them Jesus’ Abbreviated Principles — 7 Do’s and 13 Don’ts.

For you citation sticklers, these principles are derived from the following sources:

Now, for all you evangelicals who are trying to determine if the current administration lines up with your values, let’s compare each principle to President Trump’s behavior:

Do forgive — The president has been known to forgive, but only when it is advantageous to him. “Lyin’ Ted” Cruz (R-Texas) is now “Beautiful Ted,” but only because Trump needs him in the Senate. Lindsay Graham (R-S.C.) said before the election, “I think [Trump’s] a kook. I think he’s crazy. I think he’s unfit for office.” They now embrace each other because they need each other.

Do Golden Rule — Does Donald make even the slightest attempt to follow the Golden Rule? You make the call.

“Therefore all things whatsoever ye would that men should do to you, do ye even so to them: for this is the law and the prophets.”

Or, here’s another translation, one of many hundreds in English, alone, since the Tynsdale-Coverdale version of 1535. I’m sure they all got it right.

“Treat others as you want them to treat you. This is what the Law and the Prophets are all about.”

Do honor parents — Maybe yes, though it’s been reported that Donald tried to manipulate his ailing father into changing the will to favor Trump rather than his siblings.

Do love neighbor — Consider the hatred Donald pushes out into the world.

Do volunteer — Consider Donald’s many false promises of charitable contributions that were never made. Consider that he used his “charitable” Trump Foundation as his personal piggy bank.

Don’t cause sinning — Consider Donald’s exhortations to his supporters to commit violence against protesters at his rallies. Consider his obsequious leniency toward murderous, authoritarian Russian and Saudi Arabian leaders to protect Trump Organization profits.

Don’t cheat — (see above) Donald has cheated repeatedly on each of his three wives (and often bragged about it).

Don’t covet — (see above) “I moved on her like a bitch. But I couldn’t get there. And she was married.”

Don’t hurry to evil — The history of President Trump is that he is an opportunistic hurry-er to evil. If there is money to be stolen without getting caught, through tax evasion, through debt default, Donald is on it.

Don’t hypocrite — Donald is the pre-eminent projector. This is one of his major life philosophies. He accuses everyone else of doing that for which he is guilty. A terrorist sent over a half-dozen bombs to prominent Trump critics, and Donald accuses Democrats and the media of incivility.

Don’t kill — (see above) The Saudis’ premeditated murder of a critical journalist, the Russians multiple assassinations of journalists and expatriate defectors — these are things Donald overlooks to accrue money and power.

Don’t witness falsely — The name Trump will forever be linked primarily to the word liar. “President Trump Has Made More Than 5,000 False or Misleading Claims”; The Washington Post; 9/13/2018.

In the last few weeks before the 2018 midterm elections, Donald Trump has focused his evil rhetorical powers to promote fear, hate, and division like never before. This is his last stand and he knows it. Democrats have played down the idea of getting control of the U.S. House to investigate and likely impeach the president. But deep down, everyone who has followed his presidency knows this will be the likely result.

With a Democratic (realistic) check on Trump’s “incompetence, corruption, amorality, and damage to the country and presidency” (not to mention Special Counsel Robert Mueller’s imminent report), Donald knows he will be brought to justice. Even if a GOP-controlled Senate refuses to remove him from office after an impeachment trial, Trump will be forced to resign in the face of massive corruption come to light.

But that doesn’t mean he quits fighting. Donald is a trapped rat in a small cage, trying to destroy Democrats while fighting for his existence. He will rue the day he ever decided to run for America’s highest office.

“In the home stretch of the fall campaign, President Trump has called Democrats ‘evil’ and argued they are ‘too dangerous to govern.’ He has denounced Barack Obama’s presidency and demonized former secretary of state Hillary Clinton, inspiring chants of ‘Lock her up!’ at his rallies.

“The president has also used his bully pulpit to taunt Rep. Maxine Waters (D-Calif.) as a ‘low I.Q. individual,’ impugn former CIA director John Brennan and fan conspiracy theories about liberal philanthropist George Soros. And he has called the news media ‘the enemy of the people,’ singling out CNN’s reporting as ‘fake news.’

“This week, these targets of Trump’s rhetoric became the intended targets of actual violence in the form of pipe bombs, many of which turned up Wednesday.

“Authorities found packages that appeared to contain pipe bombs addressed to former vice president Joe Biden and the actor Robert De Niro, officials said Thursday, setting off a new wave of alarm amid a sprawling investigation into pipe bombs mailed to prominent political figures and critics of President Trump. … The discoveries mean that authorities have recovered nine similar packages as part of the investigation.”

Drowning out the assassination of Saudi Arabian journalist (and U.S. resident) Jamal Khashoggi in the Saudi embassy in Turkey, this week’s biggest news are the reports of at least nine pipe bombs having been sent to a Who’s Who of prominent Trump critics. In reverse-illustration of the principle “Don’t hypocrite” stated above, President Trump immediately accused Democrats and the media of exhibiting incivility.

Theories of the bomber’s (or bombers’) motivation arose instantly. The obvious one is that the bomber has been influenced by Trump’s abundant incendiary language toward his critics and enemies. My wife, Norma, quickly proffered the idea that it could be Russia attempting to sow more discord among Americans.

Rush Limbaugh (and other right-wing conservatives) immediately purported that Democrats were responsible:

“Rush Limbaugh promoted the false-flag theory, suggesting that a ‘Democratic operative’ was more likely to have sent the devices than a Republican. ‘Republicans just don’t do this kind of thing,’ Limbaugh said on his radio show. ‘You’ve got people trying to harm CNN and Obama and Hillary and Bill Clinton and Debbie ‘Blabbermouth’ Schultz and, you know, just, it might serve a purpose here.’”

Professional political pundits don’t know how the pipe bomb story will influence the elections. A lot depends on each party’s skill in framing the issue.

But only one party has a consistent bearer of false witness bloviating with the political bullhorn inherent in control of the White House.

[TONY PERKINS]: “I think the president is providing the leadership we need at this time, in our country and in our culture.”

[INTERVIEWER]: “As a moral leader?”

Evangelicals — and everyone else — be sure to vote your values. ■