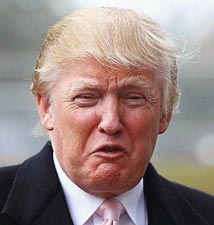 On Sunday, President Trump submitted to a real interview with a real journalist, Lesley Stahl of CBS’ 60 Minutes. He felt compelled twice to declare, “I’m not a baby.” Donald spent the rest of the interview demonstrating that he is a baby. To cover for the Saudis, Donald is using the Kavanaugh defense: Something terrible obviously happened, but the evidence is pointing to the wrong party.


On Sunday, President Trump submitted to a real interview with a real journalist, Lesley Stahl of CBS’ 60 Minutes. He felt compelled twice to declare, “I’m not a baby.” Donald spent the rest of the interview demonstrating that he is a baby.

Mr. Trump’s baby-ness is crystallized in this exasperated response to Ms. Stahl after whining (and prevaricating) that she’s treating him differently than she treated “Obama”:

The president tripped and stumbled and lied and dissembled and was forced by Stahl to qualify declarations of (non-) facts as opinions. Here’s an example:

[DONALD TRUMP]: “The day before I came in, we were goin’ to war with North Korea. …”

[DONALD TRUMP]: “And — we were gonna — I think it was going to end up in war. And my impression is — and even in my first few months …”

[DONALD TRUMP]: “I’m not denying climate change. But it could very well go back. You know, we’re talkin’ about over a millions …”

[LESLEY STAHL]: “But that’s denying it.”

[DONALD TRUMP]: “They say that we had hurricanes that were far worse than what we just had with Michael.”

News outlets have analyzed and annotated this interview thoroughly. Typical descriptive phrases of Trump’s performance were “gross ignorance,” “wild dishonesty,” and “ugly.” It will be forever remembered for the president’s rhetorical question of, “What’s an ally?” as he defended Russia and dissed the European Union. If you’re interested, pull it up on your favorite search engine. It will be there for all (internet) eternity.

Here’s a reflection: Think about how much attention the words lie and liar have received, how often they have been dissected and deconstructed, since Donald has been president. Note the many lists of Trump falsehoods media outlets have felt compelled to establish. Never before have we seen this multitude of presidential lie logs, half-truth histories, distortion documentation, taradiddle tallies — that’s it, I’m out of alliterative analogies for tracking Trump’s mendacity.

The guy will be remembered for a lot of terrible things. But the word liar always will be the first thought that comes to mind after hearing the name Trump.

In the Top 10 of other characteristics Donald will be remembered for is greed.

… of Trump Greed at any Cost

In the news for the past two weeks has been the mysterious disappearance of Jamal Khashoggi. He entered the Saudi Arabian embassy in Istanbul, Turkey, October 2. He has never emerged. Khashoggi is a self-exiled Saudi citizen who came to live in the United States last year. He left his home country because he was fearful of repercussions that might result from his criticism of that country’s powerful young Crown Prince, Mohammed bin Salman. Over the past year, Khashoggi has continued his criticism as a U.S. resident and columnist at The Washington Post.

The Turkish government has been dribbling information about the existence of evidence (video and audio recordings) that Mr. Khashoggi was lured to the Saudi consulate in Istanbul to obtain some needed paperwork, then tortured, killed, and dismembered by a 15-man assassination squad. The squad included a Saudi government autopsy doctor who was equipped with a bone saw. It’s unclear why Turkey has not turned over their evidence to U.S. intelligence agencies. But their latest claim is that Jamal Khashoggi was fearful for his life, therefore he wore an Apple watch into the embassy that apparently recorded his interrogation, torture, and murder to the cloud.

Turkey has released scans of passports they say belong to seven of the 15-member assassination team. American investigative reporters have determined that many of the seven passport-identified men have strong connections to, or work for, the Saudi royal family.

The upshot is that most of the world is pretty sure Crown Prince Mohammed bin Salman ordered the killing.

Here’s where President Trump comes in with his suspicious defense of the Saudis:

“I actually think we’d be punishing ourselves if we [imposed sanctions on the Saudi government].”

“Speaking to reporters … Trump said he had spoken to the King of Saudi Arabia and that he had ‘firmly denied’ any involvement with Khashoggi’s disappearance or alleged murder. Trump seemed to accept the king’s denials and even floated a theory that ‘rogue killers’ could have been involved. Trump said the king ‘didn’t really know’ what happened to Khashoggi and then added: ‘I don’t wanna get into his mind. But it sounded to me like maybe these could have been rogue killers, who knows.’”

“Here we go again with, you know, you’re guilty until proven innocent. I don’t like that. We just went through that with Justice Kavanaugh and he was innocent all the way as far as I’m concerned.”

“President Trump … expressed confidence Wednesday that the Saudi government could be trusted to investigate the disappearance and suspected murder of a U.S.-based Saudi journalist in Turkey — despite the likelihood that senior Saudi officials were involved.”

And here are the reasons for President Trump’s suspicious defense of the Saudis:

“He’s booked hotel rooms and meeting spaces to them, sold an entire floor in one of his buildings to them and, in desperate moments in his career, gotten a billionaire from the country to buy his yacht and New York’s Plaza Hotel overlooking Central Park. President Donald Trump’s ties to Saudi Arabia run long and deep, and he’s often boasted about his business ties with the kingdom. … ‘The Saudis are funneling money to him,’ said former federal ethics chief Walter Shaub, who is advising a watchdog group suing Trump for foreign government ties to his business. That undermines ‘confidence that he’s going to do the right thing when it comes to Khashoggi.’”

“President-elect Donald Trump registered eight companies during his presidential campaign that appear to be tied to hotel interests in Saudi Arabia, according to a report in The Washington Post. … ‘They buy apartments from me,’ Trump said during the [August 21, 2016] Alabama rally. ‘They spend $40 million, $50 million. Am I supposed to dislike them? I like them very much.’”

President Trump is in a pickle. He has encouraged a war against journalists around the world with his constant vile rhetoric about the American “fake news” being the “enemy of the people.” The Saudi king and crown prince didn’t get preapproval from Trump for the murder of their dissident. But they certainly got the message that they could get away with it. The royal family also has calculated that Donald is so financially beholden to them that he won’t hold them accountable for their violations of human rights and international law. These are the facts: 1) Trump loves money above all else; 2) Trump cares not about human rights; 3) Trump cares less about journalists.

Now the Saudis have gone too far, and Donald has only himself to blame.

Donald Trump has stripped the United States of its moral authority and its capacity to role-model human rights, decency, and moral behavior around the world. Mission accomplished. In fact, highly respected conservative foreign policy expert Max Boot (who has rescinded his membership in Trump’s Republican Party) has written an article in today’s The Washington Post: “Trump Has Given Every Despot on the Planet a License to Kill.”

To keep up his pretense of normal human emotions, President Trump must feign some concern about the gruesome murder of a U.S.-based journalist by the recipient government of that journalist’s criticism. To do this, Donald is using the Kavanaugh defense: Something terrible obviously happened, but the evidence is pointing to the wrong party.

Donald likes money — a lot. And he likes to help his amoral wealthy brethren accumulate money, including the ones, like himself, who are amassing huge fortunes from Saudi contracts. What’s a greedy, selfish bastard who finds himself president to do?

Why, fold for the money, of course. Just like at Helsinki.

This time, though, even his GOP sycophants in Congress might have to hold Saudi Arabia accountable, to protect their own political interests. And Congress has the power to override the president and impose sanctions and other punishments on the Saudi government.

We may have a showdown looming. Trump’s not going to lose money over a damn dead journalist. But his own Republican supporters in the legislature might have to bully him for a change, and take some of his candy away.