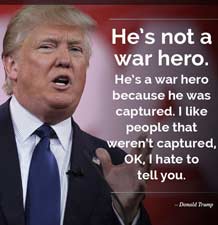 Donald is engaging in sore loser syndrome — as he always does when he loses. He actually berated certain losing Republican House candidates who put distance between themselves and the White House. Every other president understood their support was weak in certain geographic areas and that their party’s candidates had to adjust campaign strategy accordingly. No matter — the losing Republicans did not fully “embrace” Trump and Trumpism; therefore, they are dead to him.

In his press conference, the day after Democrats won enough congressional seats to take control of the House of Representatives in January 2019, President Trump has demonstrated once again that he is the quintessential a**hole.

In this instance, Donald was engaging in sore loser syndrome — as he always does when he loses. He actually berated certain losing Republican House candidates who put distance between themselves and the White House. They did this to adapt to the realities of their districts, i.e., the president is vastly unpopular in those districts. Every other president understood their support was weak in certain geographic areas and that their party’s candidates had to adjust campaign strategy accordingly. No matter — the losing Republicans did not fully “embrace” Trump and Trumpism; therefore, they are dead to him.

Mr. Trump also suffers from sore winner syndrome. Bigly. He has engaged in this full-time since his improbable election win in 2016, when the wholly un-democratic Electoral College gave the presidency to the person who came in second (— thanks to Lawrence O’Donnell). Trump has reveled consistently in belittling his 2016 Democratic opponent and her supporters — to this day, two years after he won. He is consistently rude. He’s consistently vain. He consistently acts smarter than everyone else, though he is woefully uninformed. He consistently feigns maturity, though he clearly is a baby.


Speaking of Your Mother: “Leaving Out Information Is Just as Bad as Lying”

“Those that worked with me in this incredible Midterm Election, embracing certain policies and principles, did very well. Those that did not, say goodbye!”

And even many of “those that worked with me,” they can also “say goodbye!”

The president identified several losing GOP candidates who didn’t embrace him, against whom he will forever hold a grudge. He conveniently did not mention any of the losing Republican candidates he endorsed and who did embrace him. Here are but a few of those:

By President Trump’s own admission, he stumped hard for Republican senatorial candidates. There was plenty of mutual embrace. He lost three of those by 10, 5, and 3 percent. Two more Senate race results are in overtime, too close to call. The president also went all in for two of his favorite gubernatorial candidates, incumbent Scott Walker (R-Wis.) and former White House Voter Fraud Panel (which found none) vice chairman Kris Kobach (R-Kan.). Walker came up 1.2 percent short — no blowout but a clear loss. Kobach lost by 5 percent — a definite message from Kansas voters.

Did I say Trump loves, loves Scott Walker and Kris Kobach and strongly endorsed them?

Trump said he couldn’t campaign personally for all of the House Republican candidates because there are too many congressional seats, “too many people.” Fair enough. But these days, more than ever, political sentiments are telegraphed nationally. Mitt Romney (R-Utah) found this out the hard way during his 2012 presidential contest. He thought he could pander two opposite messages to two different constituencies. It turned out northern voters heard what he said in the South, and vice versa.

In the era of Trump, almost every point he makes, at every rally or press conference or informal Q&A, is heard by everyone who consumes news. Donald could not have made it any clearer: A vote for the Republican — anywhere in the country — is a vote for him. A Democratic vote is a vote against him.

The Republic Spoke: Thumbs Down to Trumpism

In the 2018 midterms, Democrats will have netted a House seat gain in the mid-to-high 30s (after late returns are tabulated). The generic nationwide vote for all U.S. House candidates is projected to be Democrats 53 percent to Republicans 46 percent. The final result could be a slightly larger margin than in the consequential 2010 midterms when Republicans gained 63 seats in the House. In that year, the GOP came out ahead generically by 6.8 percent, largely through their wildly successful propaganda campaign about the “dangers” of the Affordable Care Act (remember “death panels”?). The reason their 2010 national vote margin was similar but their House gains were far larger, compared to 2018, is because gerrymandering across the states has doubled the number of generic Democratic votes needed to gain Democratic seats.

All the more remarkable, the 2018 blue blowout came in spite of a great economy and record-low unemployment (started under Obama and continuing under Trump) and a surge of Republican voter suppression efforts.

“A vote for the Republican is a vote for me.” Well, Mr. Trump, apparently 7 percent more voters didn’t like you this year — some kind of record if I’m not mistaken.

Today, the day after midterm elections, in a classic Trumpian stunt, the president fired his embattled attorney general, Jeff Sessions. This was no surprise. But there are two apparent reasons for the timing: 1) the wall-to-wall news coverage of the Democrats regaining control of the House (and the investigative authority that goes with that) along with other wins was increasingly annoying to Donald — he wanted to change the subject; and 2) rumors have been circulating that Special Counsel Robert Mueller might be about to indict a member of the president’s family.

Normally, the attorney general’s departure would result in the elevation of Rod Rosenstein, No. 2 at Justice, to acting AG until the Senate confirmed a new appointee. But Donald circumvented all norms and Department of Justice rules — and possibly the law — by installing Sessions’ never-confirmed-by-the-Senate-for-anything, unqualified chief of staff, whom the president’s aides have been grooming just for this occasion. Matt Whitaker has publicly berated the special counsel’s investigation since its inception. He has theorized ways to shut it down, via his previous job as a cable news pundit and Trump surrogate.

Justice Department ethics rules and common sense say that Whitaker should recuse himself from the Mueller investigation and turn it back over to Rod Rosenstein. But, of course he won’t — his bias against Mueller and toward Trump is why he was hired at Justice, and why Trump elevated him to the top job.

Rosenstein has been overseeing the special counsel since Sessions recused himself from all-things Russia shortly after joining the DOJ in early 2017. Since then, Trump’s top staff members have regularly talked him down from firing Sessions because it would have been seen as more evidence of obstruction of justice in the Mueller probe (which it is seen as today). Note that Jeff Sessions has been the president’s dream AG in every way — except for Sessions’ recusal. Because of that, Jeff could not protect Donald from Russia-gate.

But now, President Trump feels emboldened, or cornered and desperate, depending upon your political perspective.

There will be much more to come on this story. Congressional Democratic leaders are calling this a “break-the-glass” moment, meaning it is a constitutional emergency. Citizen groups — that have been on alert for this contingency — also have mobilized hundreds of protest gatherings across the country.

No one knows where this will lead. My prediction: Donald is going down. ■