Like an Episode of “Maury,” Without the Paternity Test 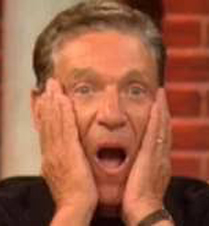 This title would be one thing if it were describing your average American dysfunctional family in a particularly tumultuous period. For dark, mysterious reasons, many people enjoy the vicarious thrill of watching others’ relationship problems explode on national television while being refereed by Maury Povich or Jerry Springer. Not that there’s anything wrong with that (— thanks to that other Jerry: Seinfeld). But the quote above is describing the White House.


“It’s like an episode of ‘Maury.’ The only thing that’s missing is a paternity test.”

This would be one thing if it were describing your average American dysfunctional family in a particularly tumultuous period. For dark, mysterious reasons, many people (enough to keep the ratings strong and sell sufficient amounts of toilet tissue and tampons to maintain profits) enjoy the vicarious thrill of watching others’ relationship problems explode on national television while being refereed by Maury Povich or Jerry Springer. Not that there’s anything wrong with that (— thanks to that other Jerry: Seinfeld).

But the quote above is describing the White House.

“[President Trump’s] mood apparently has changed as he has taken measure of the electoral backlash that voters delivered Nov. 6. With the certainty that the incoming Democratic House majority will go after his tax returns and investigate his actions, and the likelihood of additional indictments by Special Counsel Robert S. Mueller III, Trump has retreated into a cocoon of bitterness and resentment. … The president has lashed out at several aides, from junior press assistants to senior officials. ‘He’s furious,’ said one administration official. ‘Most staffers are trying to avoid him.’ The official … painted a picture of a brooding president ‘trying to decide who to blame’ for Republicans’ election losses, even as he publicly and implausibly continues to claim victory.”

The president has had a rough patch. Last week The Wall Street Journal confirmed that during his 2016 presidential campaign, Donald personally engineered 1) the quashing of two stories about separate Trump infidelities and 2) the hush-money payoffs to those two women. The Journal stated that were he not president, he would have been indicted along with his former personal lawyer Michael Cohen for campaign finance violations.

This past weekend, President Trump drew worldwide condemnation for traveling all the way to Paris, then declining to attend the multi-nation WWI veterans memorial ceremonies because of light rain. (Donald was afraid it would make his hair look bad for the cameras — really.) All other leaders who had traveled to France attended except for Russia’s Vladimir Putin. The condemnation continued in the U.S. when Trump declined to visit Arlington National Cemetery — two miles from his perch at the White House — on Veterans Day, an unbroken presidential tradition for at least a half-century.

Additionally last week, the president lost control of the House of Representatives. You could say Trump lost his best friend. You could say this if the metaphor was applicable to Donald. But being the pathological narcissist that he is, Donald has no friends — only fellow self-dealers who scratch each other’s back when it’s self-advantageous.

Which describes the Republican-controlled House for the past two years.

The upside of the GOP’s dereliction of duty in the people’s house has been the national review of high school American government class and the role of primary governmental branches. While reporting on the functional corruption of the 115th United States Congress, the media has had to give backstory, principally that one of the House’s chief functions is oversight of the executive branch. Not only has there been no Republican oversight, there has been outright conspiracy to enable the president’s numerous abuses of power, corruption, and self-enrichment.

Now that the president will no longer have that, he knows better than anyone else what’s ahead. Come Jan. 3, 2019, the Democratic House will have the power to investigate the voluminous backlog of Trumpian offenses that the GOP House has ignored, permitted, and suborned. They also will move to protect Special Counsel Robert Mueller’s Russian election-meddling probe, the one investigation Trump is most afraid of.

Here is a partial list of Trump administration areas of inquiry:

Again, this is a partial list. There is such a large number of real White House shenanigans and likely illegalities to examine that Democrats’ primary challenge will be to avoid the appearance of overzealousness — which Republicans are guaranteed to allege.

The midterm elections took place Nov. 6. On Nov. 7, I felt like Jack Lemmon in the movie Grumpy Old Men, the morning after Jack’s aging character, John Gustafson, made love to Ann-Margret. Clearly, John had not had any action in several years. The newly revitalized Gustafson was smiling to himself and catching airborne eggs behind his back, exuberantly preparing breakfast while Ann was waking up.

I felt this way not because of blind loyalty to my team — or tribe, to use the word that has soared in pundit popularity during the Trump era. No, I felt this way because it means the beginning of repairing our severely damaged national political fabric.

Donald Trump never should have become president. All of the political winds, legal and illegal, came together in a perfect storm to produce a devastating executive hurricane. Now that he’s been president for two years, everyone’s worst fears — and more — have come to fruition.

But at the first opportunity, Nov. 6, 2018, we the people made a historic correction. ■