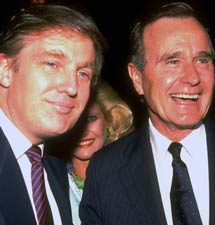 President Donald Trump has become such an ethical and moral wrecking ball on the presidency that any celebration of any American political leader’s life — no matter that leader’s political persuasion nor the ordinariness of that leader’s civic contributions — becomes a singing baritone sax at a funeral home viewing, blasting the contrast to our current White House occupant. Without meaning to be, the funeral of George H. W. Bush was a festival of contrast.

Forty-first United States president George H. W. Bush (R-Texas) passed away last Friday at the age of 94. His funeral in Washington National Cathedral was yesterday, Wednesday. Unlike Senator John McCain’s (R-Ariz.) ceremonies, which were laden with direct rebukes of current president Donald Trump — including one from the grave (McCain specifically prohibited Trump from attending his funeral) — the Bush family made no such attempts to send a message.

But the message would not be contained, even by the dignity and humanity of Bush 41, his family, and his legacy.

President Trump has become such an ethical and moral wrecking ball on the presidency that any celebration of any American political leader’s life — no matter that leader’s political persuasion nor the ordinariness of that leader’s civic contributions — becomes a singing baritone sax at a funeral home viewing, blasting the contrast to our current White House occupant. Without meaning to be, the funeral of George H. W. was a festival of contrast.

“From the moment he crossed the transept of the soaring Washington National Cathedral, tore off his overcoat, and took his seat in the front pew, President Trump was an outsider. When the others sang an opening hymn, his mouth did not move. When the others read the Apostles’ Creed, he stood stoically. And when one eulogist after another testified to George H. W. Bush’s integrity and character and honesty and bravery and compassion, Trump sat and listened, often with his lips pursed and his arms crossed over his chest.”

Mr. Bush had made it clear before his death that Donald Trump would be welcome at the funeral and other memorial services, for two reasons: 1) out of George H. W.’s  respect for the institution of the presidency; and 2) so that Trump would have no excuse to bellow his vitriol and spoil the events.

Perhaps 41 knew exactly what he was doing. There would always have been contrast. But with Trump actually present, the world was able to see him physically juxtaposed — and excruciatingly uncomfortable next to America’s former living presidents — with the accolades and respect given to Bush by the eulogists. They praised George H. W. Bush for everything Donald J. Trump is not. One praiseworthy attribute was Bush’s capacity to respect opponents and not make them into enemies — then later, befriend and work with former opponents for the common good.

“Trump was in the company of all his living predecessors for the first time, and the encounter was plainly uncomfortable. By 10:49 a.m., when Trump and First Lady Melania Trump stepped into the cathedral, a cool hush had come over the pews filled by American dignitaries and foreign leaders, past and present. Trump handed his black overcoat to a military aide and took his seat on the aisle next to his wife, with three past presidents and first ladies seated to her side.

As the four eulogists spoke, the American people and the world were compelled to consider the Trumpian contradictions to the positive characteristics of our 41st president.

“[President Bush] often said, ‘When the really tough choices come, it’s the country, not me … [the] country that I fought for.”

“Sources close to the president say he has repeatedly shrugged [the U.S. debt] off, implying that he doesn’t have to worry about the money owed to America’s creditors — currently about $21 trillion — because he won’t be around to shoulder the blame when it becomes even more untenable. … [It may be a problem,] Trump noted … ‘But I won’t be here.’”

“Those who travel the high road of humility in Washington, D.C., are not bothered by heavy traffic.”

“Part of the beauty of me is that I’m very rich.”

“He never lost his sense of humor. Humor is the universal solvent against the abrasive elements of life. [George] never hated anyone. He knew what his mother and my mother always knew: hatred corrodes the container it’s carried in.”

“In victory, he shared credit. When he lost, he shouldered the blame.”

“[President Bush’s] life code was: ‘Tell the truth. Don’t blame people. Be strong. Do your best. Try hard. Forgive. Stay the course.’ And that was, and is, the most American of creeds.”

One of the four eulogists at the funeral was former Canadian prime minister Brian Mulroney, who led his country during Bush’s time as chief executive. Mulroney credited the president for three of his administration’s achievements: passing the Clean Air Act and the Americans With Disabilities Act, and negotiating NAFTA, one of Trump’s primary trade deal foils.

“There’s a word for this. It’s called leadership. Leadership. And let me tell you that when George [H. W.] Bush was president of the United States of America, every single head of government in the world knew that they were dealing with a gentleman, a genuine leader — one who was distinguished, resolute, and brave.”

“It was not lost on the audience that Trump has slammed NAFTA as one of the worst trade deals ever; mocked a journalist’s physical disability; and rolled back scores of environmental regulations.”

“Some have said this is an end of an era. But it doesn’t have to be. Perhaps this is an invitation to fill the void that has been left behind.”

And every listener instantly associated Donald’s orange mug with the word void.

Dana Milbank crystallized the ceremonies and their relationship to the current administration brilliantly:

“Bush’s funeral was so powerful a renunciation of his current successor because it was a celebration of character. Friendship was invoked 21 times by his eulogists. Loyalty, 10. ‘Honor,’ ‘integrity,’ ‘dignity,’ ‘decency’ and inner peace all recurred. Certainly, Bush could be a fierce partisan and a brutal politician (remember Willie Horton?), but his service in World War II — he was shot down over the Pacific — left him with lessons that fueled his generation’s greatness: The opposition is not the enemy. There are causes greater than self. Political defeat is not the worst thing. And American leadership in the world is indispensable.

“Trump, for whom no cause is greater than self, must have struggled to sit through 90 minutes of something that was not all about him. Rather, it was all about what he is not.”

Special Prosecutor Robert Mueller’s team filed its eagerly awaited sentencing recommendation in court Tuesday for former Trump national security adviser Michael Flynn. We have not heard much about Flynn since he entered into a plea cooperation deal with Mueller almost a year ago. The gist of the filing is this: 1) Flynn lied repeatedly to the FBI and DOJ about contacts with Russians and other things; 2) Flynn has given up more than Mueller ever could have hoped for, concerning multiple investigations, and should be given zero jail time; and 3) Trump should be defecating handy-sized units of building material typically being rectangular.

When the president goes down, it will largely be due to Flynn singing like a canary to Mueller. Trump is kicking himself — if only he hadn’t been blinded by hating all-things Obama and had listened to his predecessor’s advice. You know Donald only hired Flynn because Obama told him not to. President Obama warned the president-elect about two things. One was North Korea. And then that other thing:

“Former President Obama warned President[-Elect] Donald Trump against hiring Mike Flynn as his national security adviser. … The warning … came less than 48 hours after the November election when the two sat down for a 90-minute conversation in the Oval Office.”

“Less than a week into the Trump administration, Sally Q. Yates, the acting attorney general, hurried to the White House with an urgent concern. The president’s national security adviser, [Michael T. Flynn,] she said, had lied to the vice president about his Russian contacts and was vulnerable to blackmail by Moscow.”

“‘There is zero question in my mind that the crown prince directed the murder and was kept apprised of the situation all the way through,’ [Sen. Bob] Corker [(R-Tenn.)] said Tuesday after the closed-door briefing with CIA Director Gina Haspel and a handful of senators. ‘Zero question in my mind.’ …

“‘There’s not a smoking gun, there’s a smoking saw,’ [Sen. Lindsay] Graham [(R-S.C.)] said, in an apparent reference to reports that the columnist [Jamal Khashoggi] was beheaded, dismembered, and his fingers were severed.”

Perhaps Corker and Graham are coming back from the Trump-supporting-land of the invertebrate. Lindsay Graham has sold his soul to Trump over the past 18 months and has lost most of his credibility with even many Republican thinkers. But as a senator, Graham is in a position to start seeing the beginning of the end of the current administration. Apparently he’s taken a stand with the murder of Jamal Khashoggi and the president’s obsequious acquiescence toward Khoshoggi’s killers: Saudi Arabia’s royal family (and major source of Trump business profits).

Wouldn’t it be nice if Lindsay Graham could begin taking a stand against all the other Trump atrocities? He has embraced Donald since shortly after the presidential election because Graham has determined he must, to retain enough support for his own re-election in 2020.

Wouldn’t it be nice if Graham could begin opposing Trump’s numerous egregious misdeeds because it’s the right thing to do? ■