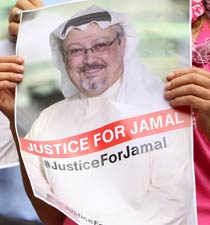 What did President Trump call the torture, murder, and dismemberment of a dissident critical reporter by the government at the receiving end of the criticism? A good start! The president lets the Saudi royal family get away with the blatant killing of a journalist so as not to jeopardize his history of huge business deals and colossal profits garnered from that country. One more outrage in the Trump era. Who cares?

I mean, c’mon: the poor guy has chronic post-bone spur stress syndrome. We can’t expect him to listen to the gruesome Jamal Khashoggi torture-murder-dismemberment tape just because it disrupts his Saudi Arabia foreign policy (not to mention threatening Trump’s massive Saudi business income). The president must remain healthy. Listening to this tape would certainly upset his stomach and could trigger memories of those bone spurs.

Seriously, ask yourself what Hillary Clinton or Barack Obama would have done.

[JOHN BOLTON]: “I don’t speak Arabic. … No, I haven’t listened to it, and I guess I should ask you, why do you think I should? What do you think I’ll learn from it?”

[JOHN BOLTON]: “How many in this room speak Arabic?”

[JOHN BOLTON]: “Well, you want me to listen to it? What am I going to learn? I mean if they were speaking Korean I wouldn’t learn any more from it either.”

[REPORTER]: “Well I think an interpreter would be able to tell you what’s going on.”

[JOHN BOLTON]: “Well then I can read a transcript. I’m just trying to make the point that everybody who says, ‘Why don’t you listen to the tape?’ — unless you speak Arabic, what are you going to get from it? … People who speak Arabic have listened to the tape and they have given us the substance of what’s in it. … I’m very satisfied that we know what the tape picked up, and it was factored into the president’s decision and he’s announced his position very clearly.”

As one pundit put it so eloquently: “Torture, murder, and dismemberment is a universal language.” That’s what you are “going to get from it,” Mr. Bolton.

Seriously, ask yourself what Hillary Clinton’s or Barack Obama’s national security adviser would have done.

“This is just a bad movie. You have John Bolton refusing to listen to a tape because he doesn’t speak Arabic. … He should want more information, not less. … [The president is] throwing in with the world’s dictators. They’re the only people he doesn’t criticize.”

Then there is Secretary of State Mike Pompeo. He and Defense Secretary James Mattis briefed a bipartisan group of senators Tuesday on developments concerning the Yemen war and Saudi Arabia. The briefing included updates on the gruesome assassination of journalist Jamal Khashoggi in the Istanbul Saudi embassy by a 15-man Saudi hit squad, complete with an autopsy doctor equipped with a bone saw. Notably absent from the briefing was CIA Director Gina Haspel, apparently the only top administration official that has actually heard Khashoggi’s Apple Watch recording of his own torture, murder, and dismemberment.

The Saudi royal family, specifically acting leader Crown Prince Mohammad bin Salman, has had to admit that Saudi nationals and government operatives were behind the killing, though they claim the hit team consisted of “rogue agents.” ([FUN FACT]: Donald Trump publicly suggested the theme of “rogue killers” and they ran with it.) They continue to deny any foreknowledge of the murder. President Trump believes their “adamant denials” and refuses to sanction them at all — not even a slap on the wrist. The CIA, however, has determined with “high certainty” (their highest rating for intelligence accuracy) that Mohammad bin Salman personally ordered the assassination of the Saudi dissident journalist Khashoggi.

The White House clearly prevented CIA director Haspel from attending the Senate briefing on Saudi Arabia, though White House and CIA spokespeople deny that. The president kept her away because he knew her briefing would have to go one of two ways: 1) a collection of truthful, accurate statements totally at odds with the White House narrative on Khashoggi’s death and the royal family’s culpability; or 2) a stumbling, dissembling performance by Haspel that would make the administration look even worse than it does now.

So Press Secretary Sarah Huckabee Sanders issued a statement saying Director Haspel had a mani-pedi appointment that just could not be rescheduled (— writer’s embellishment).

Actually, they gave no reason for Haspel’s absence and tried to ignore it. In a question-and-answer session after the briefing, reporters pressed Secretary of State Pompeo about her non-appearance. He nobly perpetuated the administration’s ignorance:

[REPORTER]: “But senators were very frustrated. Normally in your past role as CIA director, you would be here briefing senators on an issue this sensitive. Why isn’t the CIA director herself here?”

Seriously, ask yourself how Secretary of State Hillary Clinton would have handled this.

Even Lindsay Graham thinks President Trump is pulling a fast one — the pot calling the kettle a pot:

“Anything that [the White House] need[s] me for to get out of town, I ain’t doing it until we hear from the CIA.”

What did President Trump call the torture, murder, and dismemberment of a dissident critical reporter by the government at the receiving end of the criticism?

The president lets the Saudi royal family get away with the blatant killing of a journalist so as not to jeopardize his history of huge business deals and colossal profits garnered from that country.

One more outrage in the Trump era. Who cares?

The president’s former personal lawyer of 12 years, Michael Cohen, pleads guilty to lying about the status of a Moscow Trump Tower deal in the making during the 2016 presidential campaign. He and Trump have consistently sworn on their mothers’ Bibles that the deal evaporated before then (which is false). Moreover, Donald has crossed-his-heart-and-hoped-to-die since launching his campaign that he has had no — none — zero — business transactions with Russians, ever. ([FUN FACT]: That’s a big fat lie, Putin knows it, and has had this kompromatic leverage over Trump all along.)

Cohen’s latest plea is in addition to him pleading guilty earlier this year for making payoffs in 2016 to two of Donald’s paramours (with whom he gallivanted while married to Melania) — on the candidate’s orders — to keep their stories quiet before the election. The Wall Street Journal, no liberal rag, stated that were Trump not president, he would have been indicted along with Cohen for campaign finance violations. As it was, the indictment effectively labeled the president an unindicted co-conspirator.

So what? I’m tired of all this Trump-bashing. Besides, both sides lie.

Now that Paul Manafort’s plea and cooperation agreement with Special Counsel Robert Mueller has collapsed due to Paul’s repeated lying, we find out Manafort’s lawyers were funneling updates on the Russia investigation to Team Trump, something an innocent president would have no need for. Apparently, Manafort never really “flipped” on Trump and, in fact, has remained loyal. In return, the president has openly dangled a pardon for Manafort, saying, “[A pardon] was never discussed, but I wouldn’t take it off the table. Why would I take it off the table?”

Message to Manafort: “Hang in there.”

But big deal. I’m so sick of hearing about Trump; it’s all a blur.

“My sediments, exactly,” said the clean-up crew supervisor in the formerly flooded basement.

Mueller hasn’t actually laughed, or even talked, publicly since he became special counsel. As pundits like to point out, the only communications we get from him are indictments that become public or other court filings or procedures. But the current popular theory, which I agree with, is that Robert Mueller outwitted Donald Trump and his legal team — bigly.

The theory goes like this. Paul Manafort began lying shortly after entering into a cooperation deal with Special Counsel Mueller. Then Team Manafort began sending inside information to Trump’s lawyers. These efforts were expected to be rewarded with a promise — implicit or explicit — of a presidential pardon. Mueller quickly figured out Manafort was lying and informing Trump, but he kept quiet and let Paul hang himself and Donald.

Paul Manafort continued to feed Donald Trump the lies he was telling Mueller so Trump could ensure that his written answers to Mueller’s questions comported with those lies. After almost a year of stalling, Donald submitted his final answers last week. This week, the special counsel blows up Manafort’s plea deal due to Manafort’s consistent perjury. (This means Paul reaps none of the special counsel’s sentencing concessions, and Paul cannot withdraw his multitude of guilty pleas.)

The kicker here is legal experts all around believe that for Mueller to scrap the cooperation deal, he must have ample, solid evidence that Manafort has been lying. If Trump squared his written answers with Manafort’s cock-and-bull story denying Trump-Russia collusion during the 2016 campaign, Mueller must also have solid evidence that Trump will have lied extensively on his special counsel take-home test.

Message to American people: Hang in there. ■