Trump SOTU Is So Bad 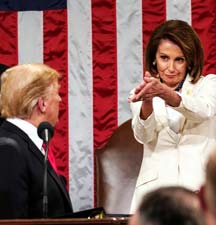 In the President Donald J. Trump era, the State of the Union has become almost meaningless, except to examine stakeholders’ reactions — and to see if Donald’s speech-reading skills have improved. He offers no policy specifics. He offers only trifling, hypocritical sentiments of compromise. Words from the mouth of Trump have lost all credibility, especially Teleprompter Trump. (scroll down for full article)


President Trump gave a speech Tuesday night to a joint session of Congress and many guests. This was the constitutionally mandated State of the Union report: “[The President] shall from time to time give to the Congress Information of the State of the Union.” In modern times, this has come to mean an annual (except for a president’s first year in office) live address, in January or February.

SOTUs have become events of great political pageantry. They are an opportunity for presidents to announce new policy initiatives and lay out their plans to achieve them. Presidents also use them to offer a compromising tone to the opposing party who might have regained control of one or both chambers of Congress in the last election.

In the President Donald J. Trump era, however, the State of the Union address has become almost meaningless, except to examine stakeholders’ (political leaders, party factions, advocacy groups, and pundits) reactions — and to see if Donald’s speech-reading skills have improved. He offers no policy specifics. He offers only trifling, hypocritical sentiments of compromise. Words from the mouth of Trump have lost all credibility, especially Teleprompter Trump.

Donald lies, obfuscates, and evades in whichever form of communication he participates. Almost everyone accepts that, including most of his allies (who believe he’s justified in lying for the cause). But Teleprompter Trump is reserved for the most obsequious of platitudes and phony feel-good declarations — to which Donald obviously does not subscribe — though he wants us to think he does — because he thinks we think he’s supposed to.

The chutzpah of Trump speechwriters is astonishing. Like the boss, they are shameless. The incongruence between what he says (reads) and what we know he believes is staggering. The banalities, bromides, chestnuts, clichés, groaners, homilies, shibboleths, tropes (that’s it, my thesaurus is out of synonyms for platitude) and outright fabrications prompt the gag reflex — or better yet, the spit-take reflex — in two-thirds of Americans. The other third is saying, “Man, I wish I could get away with that.”

No, “victory” for Donald has always been winning for Donald. If it happens to be good for the country, too, bonus.

“But we must reject the politics of revenge, resistance, and retribution — and embrace the boundless potential of cooperation, compromise, and the common good.”

OK, that’s some decent alliterative effect from the speechwriters, but the content is galactically hypocritical and void of meaning coming from this president. (“The food at that restaurant is terrible — but they give you large portions.”) Donald Trump is the epitome of “revenge, resistance, and retribution.” The only hope that he ever will “embrace the boundless potential of cooperation, compromise, and the common good” will come when Don Jr., Ivanka, or he is on the verge of donning a prison jumpsuit.

“Together, we can break decades of political stalemate. We can bridge old divisions, heal old wounds, build new coalitions, forge new solutions, and unlock the extraordinary promise of America’s future. The decision is ours to make. …

“We must choose between greatness or gridlock, results or resistance, vision or vengeance, incredible progress or pointless destruction. Tonight, I ask you to choose greatness.”

Taking Credit Where Credit Is Not Due

“In just over two years since the election, we have launched an unprecedented economic boom — a boom that has rarely been seen before. We passed a massive tax cut for working families and doubled the child tax credit.”

Here’s the thing about the Trump boom. First, it’s a continuation of the solid upward economic trend that President Obama set the country upon after saving us from a second Great Depression in 2009. All Donald had to do was not screw it up. Any financial benefit from Trump’s heralded rollback of regulations is more than negated by the damage caused by these rollbacks. Funny thing, Donald: our children might want to breathe clean air, drink clean water, and live in a Florida or California not permanently flooded or incinerated due to climate change. Families might want to be free of predatory credit card, payday, and student loan lenders. Workers might want to know that their health and safety is not endangered in production facilities and steel yards. People are funny like that.

Second, your “massive tax cut for working families” is widely acknowledged to have been a giant gift to the 1 percent and corporations. The crumbs you threw to working families barely buy an extra case of Bud Light each payday to drown the misery of living under your presidency. And remember your phony promise of a legitimate middle-class tax cut you made just before the 2018 midterm elections? That drifted off into the ozone-damaged sky after your Grand Old Party was creamed and crushed, decimated and dominated, subdued and subordinated, shellacked and schlonged — Is that enough annihilating alliteration for you?

Third, your “massive tax cut” drove the national debt up from $19.9 trillion when you took office to $22 trillion today. Sure, Democrats have contributed to the original $19.9 trillion. But when they did, Republicans called them communists, sots, and, even worse, spendthrifts. But you, Mr. Trump, exploded the debt by 10 percent in two years — after promising to eliminate it — and most of us have received little or no benefit.

“Members of Congress: the State of our Union is strong.”

They all say this. Just once I’d like to hear a president say, “The State of our Union is a little soft, a little off. I’m really sorry about this. I’ll try to do better.”

Taking Credit Where Credit Is Due

More women in Congress? Now there’s a development for which Trump honestly can take credit. In widespread opposition to his policies and character, women were elected to 35 of the 40 new Democratic seats picked up in last year’s midterms. Of the 36 women newly elected, only one is Republican. A record 102 female representatives serve in the 116th Congress, of which, 89 are Democrats.

“If I had not been elected president of the United States, we would right now, in my opinion, be in a major war with North Korea. Much work remains to be done, but my relationship with Kim Jong Un is a good one.”

In direct contradiction to Trump’s claim, it was Donald’s 2017 Twitter-threats aimed at Kim Jong Un that significantly increased the odds of a military conflict with North Korea. The U.S. president’s own generals were aghast. Trump backed off the threats, Kim settled down, and the tensions subsided. This is what the president calls avoiding war. Meanwhile, Kim Jong Un continues to strengthen his nuclear capabilities. Donald continues to assure us there is “no longer a Nuclear Threat (sic) from North Korea” (Twitter; 6/13/2018), but this declaration is disputed unanimously and vigorously by his own military-intelligence community.

“Here, in the United States, we are alarmed by new calls to adopt som in our country. America was founded on liberty and independence — not government coercion, domination, and control. We are born free, and we will stay free. Tonight, we renew our resolve that America will never be a sot country.”

Many regular Democrats and liberals (and the occasional Republican) also support those policies. You might disagree with those policies, but they are hardly som. Thank God, Trump will keep us “free.” Thank God, he’s directing us to “renew our resolve that America will never be a sot country.” And skinning dogs alive, banning libraries, and putting children in cages? Thank God, he will never allow those things either. (Oops. Scratch that putting-children-in-cages thing — Trump has done that.)

But the most memorable passage of this year’s SOTU address, the one that will be gasped at, analyzed, belittled, memorialized, and referred to in continuous new contexts as Trump criminal probes progress, will be the not-so-veiled threat to the newly Democratic House:

“An economic miracle is taking place in the United States — and the only thing that can stop it are foolish wars, politics, or ridiculous partisan investigations. If there is going to be peace and legislation, there cannot be war and investigation. It just doesn’t work that way. We must be united at home in order to defeat our adversaries abroad.”

Got that, Congress? If you investigate me, I’ll trash the economy. If you investigate me, I won’t sign any legislation. If you investigate me, our foreign enemies will defeat us. Funny thing: House Speaker Nancy Pelosi (D-Calif.) is not moved by Donald’s threats. Pelosi has Trump’s number. She knows how to get under his skin — in a good way — that’s right for the country. The president is afraid of her, and should be. Nancy is the only political adversary for whom he has not coined a derogatory nickname.

As a measure of how un-seriously Democrats take Trump’s threats, in the two days after the SOTU, House Democratic committee chairs fired up oversight efforts that the last Congress’ Republican leaders quashed for two years while they were in charge. They reignited the Trump-Russia probe. Rep. Adam Schiff (D-Calif.) issued a statement announcing his House Intelligence Committee would begin scrutinizing “credible reports of money laundering and financial compromise” within Trump’s businesses and presidential campaign, transition, inauguration, and administration.

The House is scheduling oversight hearings on presidential tax returns and migrant family separations. It is preparing to hear testimony from acting Attorney General Matthew Whitaker, Trump former attorney-fixer Michael Cohen, and others. It is drawing up subpoenas. It voted to release 50-plus congressional testimony transcripts to Special Counsel Robert Mueller so he can pursue possible perjury charges against certain Trump World actors for lying to Congress.

“I believe the time has come to bring that investigation and the other investigations of this matter to an end.”

The parallels between Donald Trump’s (as of now, alleged) criminal exploits and those of Nixon’s Watergate offenses continue to abound. But though hard to believe, Trump’s crimes will dwarf Nixon’s. ■