Trump Supporters Are People, Too 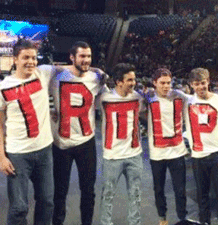 I have no patience for Trump supporters at this stage of his presidency. If a pro-Trumper repents, however, even now, I will welcome her into the congregation, with complete absolution. I will support her. I will comfort and forgive her. But in my mind, continued backing for The Donald involves such toxic rationalization, bitter selfishness, hardened hatred, utter cruelty, and such a corrupt ethic that I cannot comprehend it. (scroll down for full article)


A good friend of mine at work passed away unexpectedly last week. He was 68 years old, obviously way too young.

We chatted at least once a week for half an hour about family, about retirement funds, about work. I knew he was a demure moderate Republican. He knew I was a rabid liberal Democrat. So we avoided discussing politics aside from occasionally touching on the fringes. A few months ago, we allowed ourselves a bit of passion surrounding President Obama’s Affordable Care Act: he, con, I, pro. We parted that day on a tense note but picked up our friendly chats within a week.

The Friday before Memorial Day weekend, he stopped by my office. We talked about family, retirement funds, work. Fifteen minutes in, against both our better judgments, the confab turned to Donald Trump. I said that we have a criminal in the White House. He asked me defiantly what crimes the president has committed. I pulled together my critically thoughtful arguments, raised my voice a little, and began reciting. He upped his animation level and said the Mueller report shows “no collusion, no obstruction” — and what about Hillary and Uranium One!?

He related several more widely debunked Fox News talking points. This shocked me. I said it is very interesting that “even people like you” — intelligent, thoughtful, moderate Republicans — believe this stuff. I averred, “I’m really surprised.” I averred it again. He waved me off dismissively and hurried away in a huff.

The Tuesday after the long holiday weekend, I visited his office to make sure we were still buds. He said, “of course,” with a smile. After smoothing things over by mutually agreeing we both have our biases, we talked about family, retirement funds, work.

That’s the last time I saw him. He died two days later.

I have no patience for Trump supporters at this stage of his presidency. If a pro-Trumper repents, however, even now, I will welcome her into the congregation, with complete absolution. I will support her. I will comfort and forgive her. But in my mind, continued backing for The Donald involves such toxic rationalization, bitter selfishness, hardened hatred, utter cruelty, and such a corrupt ethic that I cannot comprehend it.

This includes everyone from Senate Majority Leader Mitch McConnell (R-Ky.) to Cathy Garnaat, the constituent of Rep. Justin Amash (R-Mich.) who went to Amash’s town hall meeting last week to challenge his support for impeachment. She said afterward, “I was surprised to hear there was anything negative in the Mueller report at all about President Trump. I hadn’t heard that before. I’ve mainly listened to conservative news and I hadn’t heard anything negative about that report and President Trump [not being] exonerated.”

Cathy, try following the example of your GOP representative, the first and only sitting Republican legislator to support Trump impeachment proceedings. He did something novel. He read the Mueller report. Like his Democratic House brethren, he read it and could not ignore the American carnage in the White House. This ultraconservative Republican, co-founder of the House Freedom Caucus, said the president must be turned out of office for his crimes.

I know it’s long at 448 pages, but read the damn report, people — or, at least, take 15 minutes to do your minimal civic duty and read the introductions and executive summaries (see link below).

But then a Trump backer dies, and he was a friend. What if I hadn’t checked in with him that Tuesday before he passed? What if I had put it off because I was still bugged about his GOP complicity, but then it became too late?

And what if he had lived, to see presidential power permanently, dangerously expanded and the Constitution weakened beyond repair because he, as a moderate Republican, didn’t speak out, didn’t accept the gospel of the Special Counsel?

Take time to tell even your Trump-supporting family members and friends that you care about them. The seed of kindness planted today could blossom tomorrow into their hearts’ acceptance of Robert Mueller (and possibly another higher power). Because any one of them could leave this earth tomorrow, before repenting.

The sudden death of a Trump-supporting friend really puts perspective on things: “too much f*****g perspective” (— thanks to David St. Hubbins, Spinal Tap guitarist). ■