If Weakness Is Provocative, Stupidity Is Suicidal 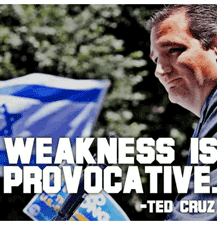 How stupid a commander in chief do you have to be to order a military strike on an adversary without a casualty estimate from your generals (“… great people these generals”)? And if it was a bluff — a crazy-like-a-fox attempt to scare the pants off Iran, only to spare it significant collateral damage at the last minute out of some phony Trumpian humanitarian streak — how stupid do you have to be to think the world believes your story: that you didn’t ask about casualties (and your generals never informed you) until minutes before the strike was to occur, with planes “in the air”? (scroll down for full article)


How stupid a commander in chief do you have to be to order a military strike on an adversary without a casualty estimate from your generals (“… great people these generals”)?

And if it was a bluff — a crazy-like-a-fox attempt to scare the pants off Iran, only to spare it significant collateral damage at the last minute out of some phony Trumpian humanitarian streak — how stupid do you have to be to think the world believes your story: that you didn’t ask about casualties (and your generals never informed you) until minutes before the strike was to occur, with planes “in the air”?

“President Trump approved military strikes against Iran in retaliation for downing an American surveillance drone, but pulled back from launching them on Thursday night after a day of escalating tensions … according to multiple senior administration officials involved in or briefed on the deliberations.

“Officials said the president had initially approved attacks on a handful of Iranian targets, like radar and missile batteries. The operation was underway in its early stages when it was called off, a senior administration official said. Planes were in the air and ships were in position, but no missiles had been fired when word came to stand down, the official said.”

Trump’s foreign-policy-by-tweet and shyster management style ultimately are going to cause a major military mishap somewhere. When that happens, his bluster and incompetence (the worst of both worlds) almost certainly will make the calamity worse. The only protection we have left is a dwindling number of government officials savvy enough to cover up their insubordination, i.e., to secretly disobey catastrophic presidential orders emanating from Trump’s worst (Does he have another kind?) instincts.

“We were cocked & loaded to retaliate last night on 3 different sights when I asked, how many will die. 150 people, sir, was the answer from a General. 10 minutes before the strike I stopped it, not … proportionate to shooting down an unmanned drone.”

Later, Donald tried to clarify, describing his decision-making process for handling the recent Iran crisis in an interview with NBC’s Chuck Todd, which aired last Sunday on Meet the Press:

[DONALD TRUMP]: “Oh, I have so many targets you wouldn’t believe. … We have targets all over.” …

[DONALD TRUMP]: “No, no, no, no. But we had something ready to go, subject to my approval. And they came in and they came in about a half an hour before, they said, ‘So we’re about ready to go.’ I said, ‘I want a better definition —’”

[DONALD TRUMP]: “No, no. [They said,] ‘We’re about ready to go.’ No, but they would have been pretty soon. And things would have happened to a point where you wouldn’t turn back or couldn’t turn back. So they came and they said, ‘Sir, we’re ready to go. We’d like a decision.’ I said, ‘I want to know something before you go. How many people will be killed, in this case Iranians?’ I said, ‘How many people are going to be killed?’ [One of the generals said,] ‘Sir, I’d like to get back to you on that.’ Great people these generals. They said, came back, said, ‘Sir, approximately 150.’ And I thought about it for a second and I said, ‘You know what? They shot down an unmanned drone, plane, whatever you want to call it. And here we are sitting with 150 dead people that would have taken place probably within a half an hour after I said go ahead.’ And I didn’t like it. I didn’t think it was, I didn’t think it was proportionate.”

“I Thought About It for a Second and I Said, ‘You Know What?’”

“By the way, General, 10 minutes ‘til all hell breaks loose with all these planes and bombs and stuff flying over Iran: Could someone get killed? That’s somethin’ we probably should have thought about” (— writer’s embellishment).


Planes in the Air

Trump told Chuck Todd that planes were not in the air when he called off the strike. Credible news outlets citing multiple administration and Pentagonian sources said planes were in the air. Who to believe? (That’s a facetious, rhetorical question.) Apparently Donald thinks he comes off looking better if he lies to say he hadn’t yet frivolously ordered our military into action — planning to call them back — to pull a cockamamie political stunt. But he did say, bragging, that he saved 150 Iranian lives that were within 10 minutes of obliteration.

First, how could a strike be 10 minutes away without planes already being “in the air”?

Second, no Joint Chiefs, Defense Department, or Pentagon in history would propose a military strike option without a death-toll estimate.

What!? Whoa! Did the president lie about this!?

One more example of Trump leading with his behind.

In his Meet the Press interview, Donald sounded like an excited little boy talking about “Bring Your Kid to Work Day,” when Dad let him operate the levers on the bulldozer. Sadly, he brings this colossal immaturity with him to the presidency, along with his “foreign-policy-by-tweet and shyster management style” (to repeat myself — but it was so good).

“Others have said this but I thought I’d amplify: the next time Trump claims Mueller report says ‘no collusion,’ ask him what page? When he lies about the report, ask what page? Maybe have a copy handy. Could you turn to the page?” #AFewGoodMen

“Defense Secretary Donald H. Rumsfeld bade farewell to the Pentagon on Friday with a combative valedictory speech in which he warned against hoping for ‘graceful exits’ from Iraq and said it would be wrong to regard the lack of new attacks on American soil as a sign that the nation is safe from terrorism.

“‘Today, it should be clear that not only is weakness provocative,’ Mr. Rumsfeld said, standing at a lectern with President [George W.] Bush and Vice President Dick Cheney at his side, ‘but the perception of weakness on our part can be provocative as well. … A conclusion by our enemies that the United States lacks the will or the resolve to carry out missions that demand sacrifice and demand patience is every bit as dangerous as an imbalance of conventional military power.’”

Since the Defense Secretary Donald Rumsfeld era, Republicans (e.g., Texas Sen. Ted Cruz, former La. Gov. Bobby Jindal) have used the phrase weakness is provocative to defend increased military spending and a hawkish posture toward U.S. adversaries. Rumsfeld was saying American weakness (military or political), or the perception of weakness, invites our enemies to seek opportunities to attack. Weakness is provocative, i.e. it provokes aggression toward us.

In the Trump era, we can say, if weakness is provocative, stupidity is suicidal.

Calgon, take me away.

Weekly Nugget #3: Where Is the Pro-Life Outrage?

“From sleeping on concrete floors with the lights on 24 hours a day to no access to soap or basic hygiene, migrant children in at least two U.S. Customs and Border Protection facilities face conditions one doctor described as comparable to ‘torture facilities.’ The disturbing, first-hand account of the conditions were observed by lawyers and a board-certified physician in visits last week to border patrol holding facilities in Clint, Texas, and McAllen, a city in the southern part of the state. The descriptions paint a bleak image of horrific conditions for children, the youngest of whom is 2 1/2 months old. ‘The conditions within which they are held could be compared to torture facilities,’ the physician, Dolly Lucio Sevier, wrote in a medical declaration obtained exclusively by ABC News. …

“After assessing 39 children under the age of 18, [Dr. Lucio Sevier] described conditions for unaccompanied minors at the McAllen facility as including ‘extreme cold temperatures, lights on 24 hours a day, no adequate access to medical care, basic sanitation, water, or adequate food.’

“All the children who were seen showed evidence of trauma, Lucio Sevier reported, and the teens spoke of having no access to hand washing during their entire time in custody. She compared it to being ‘tantamount to intentionally causing the spread of disease.’ … [She] said the facility ‘felt worse than jail. It just felt, you know, lawless. … I mean, imagine your own children there. I can’t imagine my child being there and not being broken.’”

President Trump has continued his illegal policy of migrant family separation. The administration intentionally treats immigrant children worse than animals should be treated so word will get back to potential migrants in Central America. But these people are escaping even worse conditions and existential threats in their home countries. Their lives are so endangered, they will take their chances on Donald.

The Trump administration, a rotting fish from the head down, has no humanity, no moral compass. The needle has no chance of pointing north because it doesn’t exist. Government cannot function for people from a position of amorality.

Where is the outrage from the pro-life community? Why do they laser-focus on only one aspect of life?

“Since Carroll came forward Friday with an accusation that Trump sexually assaulted her over 20 years ago, the president has repeatedly denied it, calling her a liar and saying the two have never even met [though proof has emerged they have]. …

“Previously, Trump had a similar response when another woman accused him of sexual misconduct. In October 2016, Jessica Leeds accused Trump of putting his hand up her skirt on an airplane in the early 1980s. Days after she came forward, Trump said during a rally that Leeds was not physically attractive enough for him. ‘Believe me, she would not be my first choice, that I can tell you,’ he said.”

It’s dog bites man because for Trump to defend himself with “Number one, she’s not my type” is not much of a story. He behaves and responds this way regularly. It’s only in response “Number two” that he gets around to: Oh, by the way, “It never happened.”

Does the man have a shred of self-awareness? He might as well have said, “I didn’t rape her. But just in case there’s enough evidence that I’m capable of rape, she’s not my type.” (— writer’s embellishment) ■