“It’s a Good Way to Get Kids to Skool” 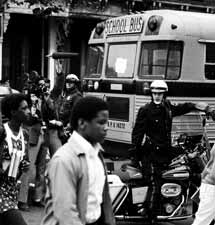 Donald clearly did not know what “busing” is, as referred to in the question from NBC’s Kristen Welker. You could just see the wheels turning in Trump’s head, his mouth spewing gibberish to stall while his brain tried to manufacture a fake answer. The best he could do? Some mumbo-jumbo about states requiring public school districts to get all kids to school one way or another: even if it means using buses. Where is the embarrassment? Where is the outrage? “Where is the bar?” said a nation who has been suffocated with Trumpian embarrassments and outrages for three years. (scroll down for full article)

It’s a holiday-shortened news week, but there’s still no shortage of Trump escapades.

In the spirit of holiday, let’s start out with something fun:

[KRISTEN WELKER (NBC)]: “I just wanted to follow up on the question about busing. Do you see it as a viable way of integrating schools? …”

[DONALD TRUMP]: “Well, that’s something that they’ve done for a long period of time. You know, there aren’t that many ways you’re going to get people to schools. … [I]t is certainly a primary method of getting people to schools.”

If you didn’t know that candidate Joe Biden (D-Del.) took some heat during and after last week’s Democratic presidential primary debate for his past record on busing to achieve public school racial integration — I don’t know, you might live under a rock or something. If you are President Donald Trump, who lives and breathes and often hate-watches cable news, and who surely was soaking in every minute of the debate for tweet-worthy moments, you have no excuse for not understanding what busing is now — even if you weren’t aware of its controversial nature in the 1970s.

But amazingly, Donald clearly did not know what “busing” is, as referred to in the question from NBC’s Kristen Welker.

You could just see the wheels turning in Trump’s head, his mouth spewing gibberish to stall while his brain tried to manufacture a fake answer. The best he could do? Some mumbo-jumbo about states requiring public school districts to get all kids to school one way or another: even if it means using buses.

[PETER BAKER (NYT)]: “[Vladimir Putin’s] comments to the Financial Times right before arriving here was that Western-style liberalism is obsolete. …”

[DONALD TRUMP]: “He sees what’s going on, I guess, if you look at what’s happening in Los Angeles, where it’s so sad to look, and what’s happening in San Francisco and a couple of other cities, which are run by an extraordinary group of liberal people.”

Trump thinks “Western-style liberalism” refers to American liberal elites and cities in the largest western-most state of our country — the state that Trump would love to excise due to extreme mutual hatred (California is overwhelmingly Democratic). Jesus!

Freedom of the individual. What’s not to like, especially for Republicans and conservatives who regularly wear (and distort) the gospel of individual freedom on their sleeves? But Russian President Vladimir Putin says that Western-style liberalism is obsolete. And American President Donald Trump agrees with him. Just look at “what’s happening in Los Angeles, where it’s so sad to look, and what’s happening in San Francisco and a couple of other cities, which are run by an extraordinary group of liberal people.” ■

Trump Holds “Impromptu” Meeting With Kim Jong Un in South Korea, Steps Into the North for 1 Minute; all Pomp, No Substance (6/30/2019)

“‘It is good to see you again,’ an exuberant Mr. Kim told the president through an interpreter. ‘I never expected to meet you in this place.’ … ‘Big moment, big moment,’ Mr. Trump told him.

“Even in this symbolic moment of reconciliation, Mr. Trump seemed to toggle back and forth between glory and grievance, reveling one minute in the history of the day and then the next griping that he was not getting enough credit for reducing friction with North Korea. … He seemed acutely defensive about criticism that he has yet to reach an agreement to eliminate North Korea’s nuclear arsenal despite summit meetings with Mr. Kim in Singapore in June 2018 and in Hanoi in February. Almost every time he saw a microphone, he complained that his achievement had not been appreciated. …

“American intelligence agencies have concluded that North Korea ‘is unlikely’ to give up its nuclear arsenal, as Mr. Trump has demanded, and even amid the rapprochement with the president, the North has produced enough fuel for a half-dozen additional nuclear weapons, according to one study. In May, it launched short-range missiles in violation of United Nations resolutions.

“Critics called the DMZ greeting an overhyped photo opportunity [and a foolish diplomatic giveaway, yielding nothing in return] by a president who himself ratcheted up the conflict with North Korea in his first year in office by vowing to unleash ‘fire and fury’ if it threatened American security.”

“Democratic anger over the conditions faced by immigrants detained at the border grew Tuesday, a day after a group of lawmakers visited some of the most controversial shelters in Texas. Congressional Hispanic Caucus Chairman Rep. Joaquin Castro (D-Texas) tweeted photos and videos of Monday’s visit by 14 lawmakers to a facility in Clint, Texas. He said the photos underlined concerns that the centers are overcrowded and those held face inhumane conditions.

“In some of Castro’s photos, women could be seen sitting on the floor, with one saying she was denied medicine and another saying her daughter had been taken from her. ‘Our border patrol system is broken,’ Castro tweeted. ‘And part of the reason it stays broken is because it’s kept secret. The American people must see what is being carried out in their name.’ … [Other visitors’ comments included] ‘inhumane conditions’ … ‘abhorrent for migrants, especially children, and it’s overwhelming and straining communities as well as agents and officers’ … ‘entire system is broken, rotten, and rife with abuse’ … ‘growing horror’ …

“Democratic anger is also being fueled by a ProPublica investigation published Monday on a Facebook group for [approximately 9,500] current and former Border Patrol agents that was filled with derogatory posts targeting migrants and Democratic lawmakers. Members of the group joked about migrants who died in their custody. The group’s discussions also included a graphic, false illustration of a smiling Trump forcing Rep. Alexandria Ocasio-Cortez’s (D-N.Y.) head toward his crotch.”

“The National Park Service is diverting nearly $2.5 million in entrance and recreation fees primarily intended to improve parks across the country to cover costs associated with President Trump’s Independence Day celebration Thursday on the Mall. … Trump administration officials have consistently refused to say how much taxpayers will have to pay for the expanded celebration on the Mall this year, which the president has dubbed the ‘Salute to America.’ …

“The diverted park fees represent just a fraction of the extra costs the government faces as a result of the event, which will include displays of military hardware, flyovers by an array of jets including Air Force One, the deployment of tanks on the Mall and an extended pyrotechnics show. By comparison, according to former Park Service deputy director Denis P. Galvin, the entire Fourth of July celebration on the Mall typically costs the agency about $2 million. …

“For Trump’s planned speech at the Lincoln Memorial, the White House is distributing VIP tickets to Republican donors and political appointees. … ‘We’ve never seen anything like this,’ Sen. Tom Udall ([D-]N.M.) … said in a phone interview. ‘No ticketed political event should be paid for with taxpayer dollars.’ …

“The ‘Salute to America’ marks the culmination of Trump’s two-year quest to mount a military-style extravaganza inspired by his visit to a Bastille Day celebration in Paris in 2017. His previous efforts to stage a Veterans Day military parade down Pennsylvania Avenue in 2018 were scuttled after estimated costs ballooned to the tens of millions of dollars.”