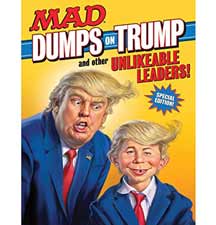 If the phrase “end of an era” ever meant anything, this is it: As of October 2019, iconic “Mad” magazine will no longer produce new content after 67 years of publishing cutting-edge sardonic, sarcastic, satiric social commentary and plain old — as numerous parents, spouses, and teachers out of the loop across America have called it — “stupid humor.” “Mad” was aimed at adolescents: the literal kind and the virtual kind, i.e., adults (granted, mostly males) of all ages with one foot remaining in their teenage years. (scroll down for full article)


If the phrase end of an era ever meant anything, this is it: As of October 2019, iconic Mad magazine will no longer produce new content after 67 years of publishing cutting-edge sardonic, sarcastic, satiric social commentary and plain old — as numerous parents, spouses, and teachers out of the loop across America have called it — stupid humor.

Mad was aimed at adolescents: the literal kind and the virtual kind, i.e., adults (granted, mostly males) of all ages with one foot remaining in their teenage years.

I still beat myself up for not taking better care of my substantial collection that was left in my parents’ house. Those issues were stacked neatly in the basement closet when I moved out a few years after high school. Over the succeeding decade, I resided out of state, living here and there during my post-adolescent years. Ultimately, Mom and Dad bought a new house, and my collection of Mads was either discarded during the move or left to one of a succession of invaders who took over my childhood home.

Thanks for the Mammaries

But the memories survive. For no apparent reason, certain Mad magazine highlights live on in my consciousness, waiting to be accessed for humorous analogous reference when circumstances arise.

There is the one-panel image of two guys filling up at the local gas station, one buying “Regular,” the other springing for “Premium.” The image is drawn with an X-ray view of the single underground tank supplying both customers.

There is the cartoon strip of a gathering of young mothers, their toddlers playing together in the next room. Suddenly, several terrifying shrieks emerge from that room. Each mother is supremely confident she recognizes her child’s wails as they all hurry to the rescue: “Oh, that’s my little Jimmy!” “No, I’d recognize Harold’s scream anywhere!” “You’re all wrong; there’s no question, that is my precious Priscilla in distress!” The source of the shrieks? The cat whose tail is being yanked mercilessly by several toddlers.

There is the guy at the hardware store warning his friend about the man approaching them: “Oh, there’s my boss, Bill. He’s such a blowhard. I give him about 30 seconds to work it into the conversation how rich he is.” Bill walks up, shakes his new acquaintance’s hand and says, “Hey, that’s a pretty firm handshake you have there — just like the mechanic who works on my Cadillac.”

And who can forget the classic words-of-wisdom poster: “It’s always very important to plan ahead,” with the words plan ahead curving down vertically because the artist ran out of room.

Oh, and the businessman in his crisp navy blue suit, walking tall, looking smug, admired by all around him for holding up so well even though his business is collapsing and his wife is divorcing him. When he gets to his office and closes the door, he falls to his knees and cries “MOMMY!”

The magazine is well-known for its creative political hits, especially the Watergate fiasco recast in a parody of The Sting. From Dwight Eisenhower to Richard Nixon and beyond, Mad has skewered presidents of both parties with equal-opportunity vigor.

The obvious questions now are these: Did Mad magazine address the absurdity of Trump’s presidency? And if so, Why didn’t it get more attention?

Mad’s circulation peaked in 1974; it was founded in 1952 by William Gaines (publisher) and Harvey Kurtzman (editor). In the 21st century, it has faded from the cultural prominence it once enjoyed. I’m embarrassed to tell you that my two obsessions — politics (currently the inane, catastrophic Trump reign) and irreverent humor — did not prompt me to check in on Mad during this tumultuous time.

But it’s never too late.

Here is the marketing blurb on www.madmagazine.com for its June 2017 Mad About Trump paperback:

“‘MAD About Trump: A Brilliant Look At Our Brainless President’ is an all-out comedy assault on the most idiotic idiot to ever reach the White House (George W. Bush and visitors included)! In these 128 pages, President Trump is mercilessly mocked, relentlessly ridiculed, and savagely satirized. The book features MAD’s sharpest satiric shots at ‘The Donald,’ comically chronicling his rise from obnoxious businessman to really obnoxious reality show host to uber obnoxious ‘Commander-in-Tweet.’ Please note: MAD will not offer refunds on this book when Trump is impeached!”

Need a little more prompting? Check out Issue No. 546 (August 2017): “Take Your Kids to Work Every Day.” The cover features Donald sitting at the Oval Office desk with daughter Ivanka and son-in-law Jared standing behind him, Ivanka sneering at the sh**-eating grinning Kushner.

One more. Remember (if you’re over 40 or so) the classic Coppertone sunscreen commercial, the one where the puppy on the beach is pulling down a cute little girl’s bathing suit bottom to expose a tiny bit of her untanned derriere? The May 2019 paperback Mad About the Trump Era Error cover features Donald — on all fours in his signature suit and over-long red tie — pulling down Vladimir Putin’s bathing suit with his teeth to expose the Russian president’s untanned butt. Shirtless Vlad is feigning childlike abashment. Oh, and Putin has a tatt of Alfred E. Neuman on his milky-hued left cheek.

I ordered my copies today. ■

“Wealthy financier and registered sex offender Jeffrey Epstein was arrested Saturday in New York on new sex-trafficking charges involving allegations that date to the early 2000s. … [He] is accused of paying underage girls for massages and molesting them at his homes in Florida and New York. …

“Epstein’s arrest … comes amid renewed scrutiny of a once-secret plea deal that ended a federal investigation against him. That deal, which is being challenged in Florida federal court, allowed Epstein, who is now 66, to plead guilty to lesser state charges of soliciting and procuring a person under age 18 for prostitution. Averting a possible life sentence, Epstein instead was sentenced to 13 months in jail [with work-release privileges 12 hours per day, six days per week]. …

“Epstein’s deal was overseen by former Miami U.S. Attorney Alexander Acosta, who is now Trump’s labor secretary. Acosta has defended the plea deal as appropriate under the circumstances, though the White House said in February that it was ‘looking into’ his handling of the deal.

“U.S. District Judge Kenneth Marra of Florida ruled earlier this year that Epstein’s victims should have been consulted under federal law about the deal [thereby making Acosta’s plea deal illegal], and he is now weighing whether to invalidate the non-prosecution agreement, or NPA, that protected Epstein from federal charges.”

“The poor treatment of migrant children at the hands of U.S. border agents in recent months extends beyond Texas to include allegations of sexual assault and retaliation for protests, according to dozens of accounts by children held in Arizona collected by government case managers and obtained by NBC News.

“A 16-year-old Guatemalan boy held in Yuma, Arizona, said he and others in his cell complained about the taste of the water and the food they were given. The Customs and Border Protection agents took the mats out of their cell in retaliation, forcing them to sleep on hard concrete. A 15-year-old girl from Honduras described a large, bearded officer putting his hands inside her bra, pulling down her underwear and groping her as part of what was meant to be a routine pat-down in front of other immigrants and officers. The girl said ‘she felt embarrassed as the officer was speaking in English to other officers and laughing’ during the entire process, according to a report of her account. …

“Earlier reports from investigators for the Department of Homeland Security’s Office of the Inspector General from the El Paso and Rio Grande Valley sectors in Texas detailed horrific conditions for children and other migrants held in overcrowded border stations where they were not given showers, a clean change of clothes, or the space to sleep. The reports from the Yuma CBP sector describe similar unsanitary and crowded conditions but go further by alleging abuse and other misconduct by CBP officers. President Donald Trump has pushed back against reports of poor conditions for children, and Kevin McAleenan, acting secretary of the DHS, which oversees CBP, has said the reports are ‘unsubstantiated.’”

“After several days of intense criticism by President Trump, who called the British ambassador to Washington a ‘pompous fool’ and said his administration would no longer work with him, Kim Darroch on Wednesday resigned his post. Darroch provoked the president’s ire when a cache of secret diplomatic cables were leaked to a British tabloid over the weekend. The memos from Darroch described Trump as ‘insecure’ and his administration as ‘inept’ and ‘dysfunctional.’ [Most Washington insiders shrugged at the diplomatic leaks as if to say, ‘What, Me Worry? This is common knowledge.’]

“Prime Minister Theresa May stood by Darroch — and she told Parliament on Wednesday it was a ‘matter of great regret that he has felt it necessary to leave his position.’ ‘Sir Kim has given a lifetime of service to the United Kingdom, and we owe him an enormous debt of gratitude,’ she said in Parliament. ‘Good government depends on public servants being able to give full and frank advice,’ she said, adding, ‘I hope the House will reflect on the importance of defending our values and principles, particularly when they are under pressure.'”