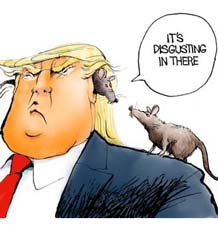 At first glance, it appears Donald doesn’t know rats are rodents. But he’s smarter than you. He wants his detractors to think he’s an incompetent, corrupt, cretinous, amoral con man from Queens who found himself rocketed into the high-dollar New York real estate market by daddy’s money, only to be shunned by the Manhattan intelligentsia he so desperately wanted to like him. And he wants you to think he doesn’t know that rats are rodents. Trump supporters heard loud and clear. When he called Rep. Elijah Cummings’ (D-Md.) Baltimore district a “rat AND rodent infested mess,” he was disparaging all the decent, hard-working squirrels, prairie dogs, chipmunks, chinchillas, porcupines, beavers, guinea pigs, hamsters, gerbils, mice, and capybaras — not just the rats. MAGA followers hate the entire furry lot of government-handout-loving, reparations-demanding, equality-seeking, reverse-racist rodents. And Mr. Trump knows exactly how to play to his supporters’ fur-free supremacist fears. (scroll down for full article)

Once again, our president has disparaged an entire class of living beings by projecting the bad behavior of a few upon the whole group.

At first glance, it appears Donald doesn’t know rats are rodents. But careful observers can see the president is playing three-dimensional chess while his opponents are playing checkers — or some other overused bullsh** analogy pundits like to apply.

The upshot simply is that President Trump is smarter than you. He’s speaking in code to his supporters (all of whom also are smarter than you). He wants his detractors to think he’s an incompetent, corrupt, cretinous, amoral con man from Queens who found himself rocketed into the high-dollar New York real estate market by daddy’s money, only to be shunned by the Manhattan intelligentsia he so desperately wanted to like him. And he wants you to think he doesn’t know that rats are rodents.

What suckers. Trump’s opponents are so far off track.

Of course, the Trumps of the world don’t literally say, “all Muslims are terrorists.” They’re (slightly) more subtle. They promote policies banning members of a certain religion, “calling for a total and complete shutdown of Muslims entering the United States until our country’s representatives can figure out what the hell is going on.” They pick Willie Horton, a black raper-murderer as the face of Michael Dukakis’ supposed softness on crime — they plaster Horton’s disheveled mug across the airwaves until H. W. Bush supporters are scared into equating black man with fear of crime.

And they put the words rat and rodent in the same sentence, which denigrates all rodents.

But I submit to you, my fair-minded readers: This is like saying all Caucasian Christians are domestic terrorist scum because Timothy McVeigh and Terry Nichols, infamous Caucasians and Christians, bombed the Alfred P. Murrah Federal Building in Oklahoma City killing 168 people, including 19 children.

It’s like saying all old white male Kentucky Republicans are “Russian assets” just because one of them ascended to U.S. Senate Majority Leader only to continuously block Democratic attempts to pass bills protecting the integrity of American elections from Russian interference. I’m sure there are many fair-skinned geriatric Kentuckian GOP men who support fighting Putin’s election interference even though it would help their candidate. They all should not be branded un-American and traitorously partisan because of one (“Moscow”) Mitch McConnell.

But Back to the Rats

“Better to have a few rats than to be one.”

(Baltimore Sun Editorial Board; “Better to Have a Few Rats Than to Be One”; Baltimore Sun; 7/27/2019.) (referring to President Trump’s dissing of Baltimore)

As many political analysts have determined, Trump has no other realistic path to reelection than his racist Hail Marys, repeatedly thrown the length of the field to the end zone, i.e., the Electoral College. But don’t make the mistake of thinking he’s playing three-dimensional chess, or galactic pinochle, or nuclear tiddlywinks. (Wait — he is playing nuclear tiddlywinks.) Donald is throwing racist Hail Marys because he’s comfortable with them. It’s not strategy, it’s the man. Nothing comes more natural to this guy than hate, that is, racism.

The word is that most of the president’s closest advisers are downright begging him to stop his racist non-strategy. This is how you know it’s not three-dimensional chess. Trump cannot stop his self-destructive tendencies because it just feels too damn good.

I Leave You With Additional Excerpts From the Baltimore Sun Editorial

“In case anyone missed it, the president of the United States had some choice words to describe Maryland’s 7th congressional district on Saturday morning. Here are the key phrases: ‘no human being would want to live there,’ it is a ‘very dangerous & filthy place,’ ‘Worst in the USA’ and, our personal favorite: It is a ‘rat and rodent infested mess.’ … Donald Trump’s wrath was directed at Baltimore and specifically at Rep. Elijah Cummings [(D-Md.)]. …

“In pointing to the 7th, the president wasn’t hoping his supporters would recognize landmarks like Johns Hopkins Hospital, … the U.S. Social Security Administration, … the beauty of the Inner Harbor, or the proud history of Fort McHenry. And it surely wasn’t about the economic standing of a district where the median income is actually above the national average. No, he was returning to an old standby of attacking an African American lawmaker from a majority black district on the most emotional and bigoted of arguments. It was only surprising that there wasn’t room for a few classic phrases like ‘you people’ or ‘welfare queens’ or ‘crime-ridden ghettos’ or a suggestion that the congressman ‘go back’ to where he came from. …

“We would above all remind Mr. Trump that the 7th District, Baltimore included, is part of the United States that he is supposedly governing. … If there are problems here, rodents included, they are as much his responsibility as anyone’s, perhaps more because he holds the most powerful office in the land.

“Finally, while we would not sink to name-calling in the Trumpian manner … we would tell the most dishonest man to ever occupy the Oval Office, the mocker of war heroes, the gleeful grabber of women’s private parts, the serial bankrupter of businesses, the useful idiot of Vladimir Putin, and the guy who insisted there are ‘good people’ among murderous neo-Nazis, that he’s still not fooling most Americans into believing he’s even slightly competent in his current post. Or that he possesses a scintilla of integrity. Better to have some vermin living in your neighborhood than to be one.”