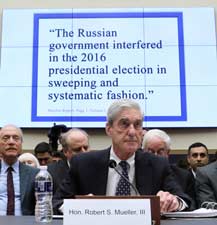 Mr. Mueller was referring in his testimony to the practice of seeking, accepting, and welcoming foreign election help, even if it falls (just) short of criminality. Yeah, Mueller was shaky. He “juddered.” But because Mueller’s performance was juddering, we should ignore what he said? The points he confirmed? The message was a damning indictment of the president’s criminality, corruption, and betrayal of America. The messenger juddered a bit. But 40% of the country WILL ignore the facts and literal content of the message. This is a major component of the new Trumpian normal: Slam the messenger so hard and so long with ad hominem attacks that 40% of the country ignores or disbelieves solid evidence — facts. Or worse, they believe the evidence, the facts, and don’t care. (scroll down for full article)


[REP. PETER WELCH (D-VT)]: “My concern is, have we established a new normal from this past campaign that is going to apply to future campaigns so that any one of us from the U.S. House, any candidate for the Senate, any candidate for the presidency of the United States, aware that if a hostile foreign power is trying to influence an election, has no duty to report that to the FBI or other authorities?”

In this statement from former Special Counsel Robert Mueller yesterday during his open-hearing testimony before the House Judiciary and Intelligence committees, Mr. Mueller was referring to the practice of seeking, accepting, and welcoming foreign election help, even if it falls (just) short of criminality.

But the fear of a new Trumpian normal also applies to many other egregious — but so far not proved to be criminal beyond a reasonable doubt — acts:

— Self-dealing through the office of the presidency

— Hourly ad hominem attacks of opponents, and allies who stray from the party line

— Constant pathological lying in the face of obvious truth, which supporters defend and relish

Play the home game. See how many more illegal — and egregious but not quite criminal — acts you can attribute to President Trump.

By most news and pundit accounts, Bob Mueller tarnished his reputation during his probably last significant appearance in the public spotlight.

Yes, he was halting. Shaky. One reporter from The Washington Post called his performance juddering. Which means halting and shaky. But now you know a new word (chiefly used by the British — I had to look it up, too). The nearly 75-year-old Mueller seemed old. “Lost a step” was a common characterization of the man during his seven-hour testimony. He often answered in one-word answers: “Yes.” “True.” “No.” “Correct.” Or two words: “Not true.” “No sir.”

He also kept his promise, for the most part, of limiting his testimony to what is stated in the report.

Republicans tried to discredit him with attempts at obscure legal pretzel logic and — as always — misleading claims and conspiracy theories. They insulted him. They yelled at him. They accused his report of being un-American. He generally did not defend himself or otherwise respond to GOP attacks except to say, “I take your question,” or “I can’t speak to that.” Then he would sit in silence, waiting for the next question. He did perk up to defend his staff when they were attacked.

Democrats tried to draw him out with thoughtful questions. They gave him a lot of praise, for his life’s service to the country and for his Mueller investigation service to the country. They were disappointed to get mostly one-, two-, or three-word answers to their questions. They were successful in getting Mr. Mueller to confirm many of the damning points in and arising from the report.

In no particular order, Democrats got Special Counsel Robert Mueller to confirm the following:

— Investigation was not a witch hunt, not a hoax

— Mueller had no conflicts of interest in investigating this president

— Mueller hopes seeking and welcoming foreign election help is not the new normal, but he fears it is

— Mueller never has asked, in his career, any prospective staff members about their political affiliation

— President “was not exculpated for the acts that he allegedly committed”

— President could be indicted after leaving office

— President refused to answer any written questions about obstruction of justice

— Regarding Trump’s praise of WikiLeaks: “Problematic is an understatement”

— Report did not exonerate the president

— Report did not say there was no collusion

— Report did not say there was no obstruction

— Russian election interference in U.S. elections was not a hoax

— There were ample national security reasons to begin the investigation

— Trump told McGahn to lie about Trump’s attempt to fire Mueller, and make a false record to cover up the attempt

— Trump refused a personal interview with special counsel team for over a year; Mueller finally decided his evidence was strong enough without it

So because Mueller’s performance was juddering, we should ignore what he said? The points he confirmed? The message was a damning indictment of the president’s criminality, corruption, and betrayal of America. The messenger juddered a bit.

But 40% of the country will ignore the facts and literal content of the message.

This is a major component of the new Trumpian normal. Slam the messenger so hard and so long with ad hominem attacks that 40% of the country ignores or disbelieves solid evidence — facts. Or worse, they believe the evidence, the facts, and don’t care. They celebrate that Trump is getting away with it.

Either way, this country is in grave danger (“Is there another kind?” — thanks to Col. Nathan R. Jessup aka Jack Nicholson). There is one way only to escape the Trumpian nightmare. Citizens must learn and care about what’s going on, what’s right and wrong. Excuses such as “too busy” or “both sides lie” are indefensible and unforgivable. After Pearl Harbor was attacked, no one was “too busy” to support the war effort. No one said, “Well, Japan and America both lie.”

Donald Trump’s attack on America from within is no less serious, no less dangerous. We have a democracy to save. It is the duty of all citizens to educate themselves to some minimal degree about what’s happening. Can’t read the entire Mueller report? At least read the 15 pages of Volumes I and II introductions and executive summaries. Can’t take a day off to watch the entire congressional testimony? Make a point to access the highlights, from a legitimate, objective news source.

There are empirical, objective lists galore that lay out the damage Trump is doing to the United States and its system of government. Everyone should be taking a crash — or refresher — course in critical thinking. Everyone should care. ■