Not a Quid Pro Quo? 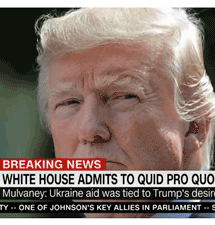 “This was not a quid pro quo” (— President Trump). This was not a bribe. I simply gave the lieutenant governor money for pushing through my liquor license. This was not extortion. All I did was let the senator know that if he couldn’t pay the “bills,” those compromising photos would find their way onto my Instagram account. This was not tax evasion. I just didn’t report my foreign lobbying income. This was not money laundering. All I did was buy a carwash to run my meth income through. This was not a bear sh**ing in the woods. It was simply a large brown furry mammal belonging to the family Ursidae (of the order Carnivora) defecating in a woodland area supporting an understory of shrubs, herbs, or grasses. (scroll down for full article)


“President Trump told Ambassador Sondland that he was not asking for a ‘quid pro quo.’ [Rather, he only insisted that Ukrainian] President Zelensky go to a microphone and say he is opening investigations of Biden and 2016 election interference. … [He] was adamant that President Zelensky, himself, had to ‘clear things up and do it in public.’

“President Trump [again] said it was not a ‘quid pro quo.’ Ambassador Sondland said that he had talked to President Zelensky and [Zelensky adviser] Mr. Yermak and told them that, although this was not a quid pro quo, if President Zelensky did not ‘clear things up’ in public, we would be at a ‘stalemate,’ [i.e.,] Ukraine would not receive the much-needed military assistance. …

“Ambassador Sondland also told me that he now recognized that he had made a mistake by earlier telling the Ukrainian officials to whom he spoke that a White House meeting with President Zelensky was dependent on a public announcement of investigations — in fact, Ambassador Sondland said, ‘everything’ was dependent on such an announcement, including security assistance. He said that President Trump wanted President Zelensky ‘in a public box’ by making a public statement about ordering such investigations.”

“This was not a quid pro quo.” (— President Trump)

“This was not money laundering. All I did was buy a carwash to run my meth income through.” (— Heisenberg)

This was not a bribe. I simply gave the lieutenant governor money for pushing through that liquor license the state Alcohol Control Commission was denying me for that pesky felony on my record.

This was not extortion. All I did was let the senator know that if he couldn’t pay the “bills,” those compromising photos of he and his peach-haired paramour would find their way onto my Instagram account.

This was not tax evasion. I just didn’t report my foreign lobbying income.

This was not a bear sh**ing in the woods. It was simply a large brown furry mammal belonging to the family Ursidae (of the order Carnivora) defecating in a woodland area supporting an understory of shrubs, herbs, or grasses.

Former U.S. ambassador to Ukraine and current top diplomat in that country, William Taylor Jr., testified before Congress Tuesday and about blew the doors off. He confirmed the following in detail:

1) The Trump-Ukraine quid pro quo was orchestrated personally by President Trump;  Trump was directly involved in the “machinations.”

2) Ukrainian officials clearly were aware of the quid pro quo and what they had to do to get the desperately needed U.S. military aid and White House meeting: make a public commitment of their intent to investigate Trump’s primary political opponent, Joe Biden (D-Del.), over near-universally debunked corruption accusations.

3) Rudy Giuliani was running a stealth, “irregular, informal” diplomatic channel for Trump that was competing with stated U.S. policy. Giuliani was bent upon obtaining phony dirt on Joe Biden and pressuring the Ukrainians to help.

4) The “irregular channel” principals including Giuliani and The Three Amigos (Rick Perry, Kurt Volker, and Gordon Sondland) were actively attempting to cover their tracks.

5) Ambassador Taylor was so troubled by the evidence of Trump’s quid pro quo that he wrote Deputy Asst. Secretary of State George Kent a memo detailing his concerns. Secretary of State Mike Pompeo continues to withhold that memo from Congress along with many other subpoenaed documents.

Taylor’s testimony — from a 50-year, nonpartisan public servant, an ethical Boy Scout beyond reproach, who was a compulsive note taker — was so explosive, it’s being compared to the Wright brothers’ 12-second first flight at Kitty Hawk.

Oops. No, wait. That was Google’s recent supercomputer breakthrough known as “quantum supremacy.” Apparently, Google’s Sycamore processor solved a calculation in three-or-so minutes that would normally take the otherwise best (classical) computer in the world 10,000 years.

Actually, there are no comparisons yet, except to say many observers felt a tectonic shift in the presidential impeachment inquiry. Democrats and Republicans’ jaws dropped en masse at Taylor’s revelations. There were “gasps” and “sighs” from committee members during the hearing.

OK, I’ll go on the comparison. I’m comparing this to Alexander Butterfield’s testimony before the Senate Watergate Committee staff. In July 1973, Butterfield  — the top aide to President Nixon’s chief of staff Bob Haldeman — revealed for the first time that there was a taping system in the White House. When asked by congressional questioners on a strong hunch, he said, “I was wondering if someone would ask that. There is tape in the Oval Office. … Everything was taped … as long as the president was in attendance. There was not so much as a hint that something should not be taped.” Butterfield had hoped not to be asked but had previously decided he would answer if queried.

Kind of like what Ambassador Bill Taylor’s testimony is sure to do with the Trump impeachment inquiry.

“Ambassador Sondland tried to explain to me that President Trump is a businessman. When a businessman is about to sign a check to someone who owes him something, he said, the businessman asks that person to pay up before signing the check.”

By the way, thanks to Wikipedia for the Butterfield quotes and details. ■

[RECAP]: 10/17/2019 — Ambassador to EU Gordon Sondland testifies to Congress: 1) Trump essentially dictated the “no quid pro quo” text he sent acting ambassador to Ukraine Bill Taylor; 2) Trump largely delegated Ukraine policy to Rudy Giuliani, which Sondland disagreed with; and 3) Sondland didn’t know about Ukraine extortion “until later” — he heard Giuliani mention “Burisma Holdings” in August 2019 but didn’t know Hunter Biden had been on its board (though Giuliani has been making this connection incessantly since spring)

10/17/2019 — WH Chief of Staff Mick Mulvaney holds press conference, essentially admits Trump-Ukraine quid pro quo: “Did [the president] also mention to me in passing the corruption related to the DNC server? Absolutely. No question about that … and that’s why we held up the money. … We do that all the time with foreign policy. … I have news for everybody: get over it. There’s going to be political influence in foreign policy. That is going to happen.”

10/17/2019 — Energy Secretary Rick Perry — one of The Three Amigos in Ukraine scandal — announces his resignation, will refuse to honor congressional subpoena

10/17/2019 — WH Chief of Staff Mick Mulvaney tries to backtrack, just hours after quid pro quo admission: “Once again, the media has decided to misconstrue my comments. … The only reasons we were holding the money was because of concern about lack of support from other nations and concerns over corruption.” Three days later, Mulvaney told Fox News’ Chris Wallace, “[I] didn’t speak clearly … folks misinterpreted what I said.” Wallace responded, “You said what you said … I believe that anyone listening to what you said in that briefing could come to only one conclusion[: quid pro quo.]”

10/18/2019 — Hillary Clinton cleared of any wrongdoing regarding emails during her time as secretary of state; note that 3 years after Trump’s initial, ubiquitous false accusations, she was cleared by Trump’s own State Department and the GOP-led Senate Judiciary Committee

10/22/2019 — Acting ambassador to Ukraine Bill Taylor testifies to Congress, presents bombshell revelations, confirmed with details: 1)Trump-Ukraine quid pro quo was orchestrated personally by Trump; 2) Ukraine clearly was aware of the quid pro quo and what they had to do (investigate Biden and 2016 DNC server) to get the desperately needed U.S. military aid and White House meeting; 3) Rudy Giuliani was running a stealth, “irregular, informal” Ukrainian diplomatic channel competing with Taylor’s own; Giuliani was bent upon obtaining false dirt on Trump’s political opponent, Joe Biden (D-Del.), and he pressured Ukraine to help; 4) the “irregular channel” principals were hiding their tracks; 5) Taylor was so troubled by the evidence of quid pro quo, he wrote Deputy Asst. Secretary of State George Kent a memo detailing his concerns

10/23/2019 — 30-some GOP Reps. storm impeachment hearing SCIF room, delaying proceedings for 5 hours, ostensibly protesting “unfairness” and “secrecy,” though Republican impeachment committee members are enjoying full participation in the hearings along with Democratic members; stunt widely believed to be a distraction from yesterday’s highly damaging testimony by Amb. Bill Taylor; Trump knew of planned stunt the day before and urged it on

10/23/2019 — Deputy Asst. Secretary of Defense Laura Cooper testifies to Congress, about the mechanics of Ukrainian military aid distribution and how Trump personally held it up

10/23/2019 — Ukrainian president and staff knew of military aid holdup by Trump in early August, which refutes Trump administration’s claim that “there couldn’t have been a quid pro quo without the quo” (claiming Ukraine never knew of the freeze)