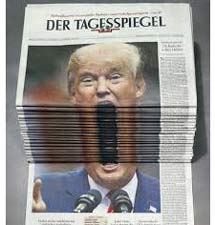 Acclaimed New York Times journalist and author Michelle Goldberg used a term during an appearance this week on a cable news show. She described President Trump’s rhetorical style as “verbally incontinent.” Is that beautiful or what? Verbal incontinence would be the inability of the brain to stop the stream of words coming out of one’s mouth, as regular incontinence is the “inability of the body to control the evacuative functions of urination or defecation.” (Merriam-Webster.) Like the product of regular incontinence, the result of Trump’s verbal incontinence — his rhetoric — has the qualities of urine and excreta. And his oral evacuative functions are uncontrolled indeed. (scroll down for full article)

Like the product of regular incontinence, the result of Trump’s verbal incontinence — his rhetoric — has the qualities of urine and excreta. And his oral evacuative functions are uncontrolled indeed.

The disgusting nature of Donald Trump’s pronouncements is well documented. John McCain is not a war hero because he was captured. The still-grieving Gold Star mother onstage alongside her husband did not speak because Muslim women are not allowed to. Meghan Kelly had blood coming out of her wherever. Stephanie Clifford is a horseface. Who could vote for anyone that looks like Carly Fiorina? And Trump has an adolescent, ad hominem nickname for every political opponent.

This is a minuscule sample of the loathsome sum of his repugnant speech.

Like the course of regular incontinence, Trump’s verbal incontinence is getting worse — as the impeachment walls close in on him.

This week and last have seen a parade of witnesses giving damaging congressional testimony, attesting to evidence of President Trump’s attempted extortion of Ukraine: demanding investigations of false dirt on Joe Biden and 2016 DNC server shenanigans in return for congressionally authorized military aid and a coveted White House visit. At least five top U.S. government officials in the know have testified that clearly there was a quid pro quo. Yeah, the extortion was unsuccessful but only because the president’s efforts were exposed, and the Senate forced the release of the Trump-delayed funds.

Witnesses are showing up, honoring congressional subpoenas though the president has ordered them not to. This week, decorated Lt. Col. Alexander Vindman, who was on the July 25 Trump call with Ukraine, testified that he heard the presidential quid pro quo, knew it was wrong, and reported it to superiors and the National Security Council lead attorney.

[RECAP]: 10/22/2019 — Acting ambassador to Ukraine Bill Taylor testifies to Congress, presents bombshell revelations, confirmed with details: 1)Trump-Ukraine quid pro quo was orchestrated personally by Trump; 2) Ukraine clearly was aware of the quid pro quo and what they had to do (investigate Biden and 2016 DNC server) to get the desperately needed U.S. military aid and White House meeting; 3) Rudy Giuliani was running a stealth, “irregular, informal” Ukrainian diplomatic channel competing with Taylor’s own; Giuliani was bent upon obtaining false dirt on Trump’s political opponent, Joe Biden (D-Del.), and he pressured Ukraine to help; 4) the “irregular channel” principals were hiding their tracks; 5) Taylor was so troubled by the evidence of quid pro quo, he wrote Deputy Asst. Secretary of State George Kent a memo detailing his concerns

[RECAP]: 10/23/2019 — Ukrainian president and staff knew of military aid holdup by Trump in early August, which refutes Trump administration’s claim that “there couldn’t have been a quid pro quo without the quo” (claiming Ukraine never knew of the freeze)

10/25/2019 — Federal judge impeachment ruling: 1) impeachment inquiry is legitimate and constitutionally sound despite no house vote on it yet; 2) Mueller report grand jury evidence, including redacted sections of report, are to be turned over to congress

10/25/2019 — Acting asst. secretary in State Dept. Bureau of European and Eurasian Affairs Philip Reeker testifies to Congress: Secretary of State Pompeo overruled and ignored his and other Dept. officials’ defense of then-ambassador to Ukraine Marie Yovanovitch when she was being pushed out by a Rudy Giuliani, Donald Trump whispering campaign to discredit her because she was blocking Giuliani’s attempts to extort Ukraine

10/28/2019 — Ambassador to EU Gordon Sondland changes his story: now tells WSJ that the July Trump-Ukraine extortion attempt was a quid pro quo, and that he told the president this at the time

10/29/2019 — Top NSC official on July 25 call, who works in White House, Lt. Col. Alexander Vindman testifies to Congress: 1) knew Trump’s quid pro quo attempt was wrong and could jeopardize U.S. national security; 2) immediately after the call he notified superiors and NSC lead counsel of his concerns; 3) tried to correct the call transcript, noting key words and phrases had been omitted, but his attempts were denied; 4) told Amb. Sondland that the efforts to implement the president’s quid pro quo were wrong

10/30/2019 — Career State Dept. diplomat Catherine Croft testifies to Congress: 1) former Republican Rep. Robert Livingston, now a powerful lobbyist, lobbied Croft and others that “Amb. Yovanovitch should be fired because she was an Obama holdover”; 2) confirms Amb. Bill Taylor’s testimony that in the July 18 meeting, Chief of Staff Mick Mulvaney ordered a hold on Ukrainian military aid, “at the direction of the president”

10/31/2019 — Top Russia and Europe adviser on NSC and John Bolton ally Tim Morrison testifies to Congress: 1) he was on July 25 Ukraine call, gives first-hand account confirming Amb. Bill Taylor’s testimony that there was a clear quid pro quo, i.e., Ukrainian aid and White House visit were to be held up until Biden/DNC server investigation was confirmed and announced; 2) Morrison was worried details of the call would leak, and was involved in deciding how to handle the transcript; 3) Amb. Gordon Sondland was following Trump’s direction to implement quid pro quo