“I Now Do Recall” 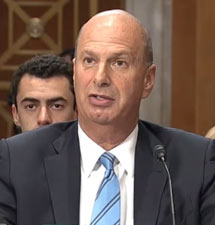 I now do recall that my $1 million contribution to the Trump inaugural committee in exchange for an ambassadorship did not include me lying for the president and going to jail for perjury. That recollection is clear. Crystal. I now recall that President Trump was demanding a public announcement of a commitment from Ukraine’s president to investigate Joe and Hunter Biden and the cockamamie conspiracy theory that it was Ukraine, not Russia, that interfered with the 2016 U.S. election — to help Hillary Clinton. I recall that Trump’s defenders are using the term quid pro quo, declaring these are used commonly in the course of normal foreign policy. But I also recall that this was not your father’s president’s quid pro quo; this was the extortion of a desperate ally, under invasion, for personal political gain. (scroll down for full article)


On Monday, Congress released the transcript of closed-door testimony given by U.S. ambassador to EU Gordon Sondland Oct. 17, 2019. Sondland is one of “The Three Amigos” working with Trump personal attorney Rudy Giuliani to execute a shadow, illegal Ukrainian foreign policy outside of normal diplomatic channels. The ambassador knew the transcript release was coming, and he knew this was his last chance to come clean before likely facing perjury charges. So Sondland’s attorney, raking in double time for Sunday work, submitted an appendix to “supplement” his client’s testimony the day before its public release.

I now do recall that my $1 million contribution to the Trump inaugural committee in exchange for my ambassadorship (to keep up with my rich ambassador friends) did not include me lying for the president and going to jail for perjury. That recollection is clear. Crystal.

I now do recall that the president of the United States, Donald Trump, was demanding a public announcement of a commitment from the president of Ukraine, Volodymyr Zelensky, to investigate Joe and Hunter Biden and the cockamamie conspiracy theory that it was Ukraine, not Russia, that interfered with the 2016 U.S. presidential election — to help Hillary Clinton. And I now remember that this demand from President Trump was a danger to U.S. national security.

(In Trump World, it was Ukraine who hacked into a DNC server, to help Hillary by shifting blame to the Russians for the illegal hack. And Ukraine is hiding this server within its borders. By Ukrainian leaders giving any credence to this conspiratorial fallacy, it allows Donald to absolve Russia of blame in helping him get elected and strengthens his own election legitimacy, which he desperately craves.)

I now do recall President Trump clarifying that neither urgently needed military aid nor a coveted White House summit would be forthcoming until President Zelensky, and only President Zelensky, did Mr. Trump’s bidding by reading a statement — implicating the Bidens in nonexistent corruption and giving credence to the nonexistent hidden DNC server — to be written by Mr. Trump’s personal attorney Rudy Giuliani.

I now recall that Joe Biden is perceived to be President Trump’s most likely political opponent in the 2020 presidential election, and that the effort to withhold aid to Ukraine until its leaders gave up dirt on Biden (and the hidden DNC server) was a crime — of extortion and bribery.

I recall that President Trump’s defenders are using the term quid pro quo, Latin for “this for that,” and declaring that quid pro quos are used commonly in the course of normal foreign policy and diplomacy. But I also recall that this was not your father’s president’s quid pro quo; this was the extortion of a desperate ally under invasion — a country that was losing lives as Donald held up their congressionally mandated military aid — for personal political gain.

I now do recall that President Trump’s defenders are arguing there couldn’t have been a quid pro quo (even while arguing there was one but it was a good quid pro quo) because 1) the Ukrainians didn’t know the aid was being held up, and 2) Ukraine ultimately received the aid without any commitment to investigate Biden corruption or the hidden DNC server, or make a public announcement regarding same.

But I do recall that subsequent, credible testimony has determined Ukraine did know exactly what Donald was demanding (dirt on Biden, cockamamie DNC server probe) in exchange for the aid and the White House visit, and the aid and visit clearly were being held up until Ukrainian leaders came through.

I also recall that the Trump administration only released the military funding after 1) evidence of the extortion attempts began surfacing, and 2) the Senate passed a resolution demanding release of the funds out of frustration with the administration’s holdup for no apparent reason.

I now recall that my first instincts were to protect President Trump, thinking the other principals involved would do the same. But to hedge my bets where I might need a back-door escape later, I recall frequently using phrases like “I don’t recall” or “My memory is not clear” in my original testimony. After reading the testimony of Bill Taylor, Tim Morrison, Alexander Vindman, and others whose incriminating and highly credible accounts grossly conflicted with mine, I recalled that I’d better invoke those back-door escapes because I did not sign up to go to prison for perjury.

I am crystal clear on that.

It could happen. Wait — it did happen, just not in so many words. ■

[RECAP]: 10/29/2019 — Top NSC official on July 25 call, who works in White House, Lt. Col. Alexander Vindman testifies to Congress: 1) knew Trump’s quid pro quo attempt was wrong and could jeopardize U.S. national security; 2) immediately after the call he notified superiors and NSC lead counsel of his concerns; 3) tried to correct the call transcript, noting key words and phrases had been omitted, but his attempts were denied; 4) told Amb. Sondland that the efforts to implement the president’s quid pro quo were wrong

[RECAP]: 10/31/2019 — Top Russia and Europe adviser on NSC and John Bolton ally Tim Morrison testifies to Congress: 1) he was on July 25 Ukraine call, gives first-hand account confirming Amb. Bill Taylor’s testimony that there was a clear quid pro quo, i.e., Ukrainian aid and White House visit were to be held up until Biden/DNC server investigation was confirmed and announced; 2) Morrison was worried details of the call would leak, and was involved in deciding how to handle the transcript; 3) Amb. Gordon Sondland was following Trump’s direction to implement quid pro quo

11/5/2019 — Ambassador to EU Gordon Sondland has “supplemented” his congressional testimony (to avoid perjury charges), which is considered highly damaging to Trump because it takes away his one “no quid pro quo” witness: 1) says he “now recalls” a clear quid pro quo; 2) told Ukraine there would be “no U.S. aid” or White House visit without the Burisma/Biden/hidden DNC server investigation Trump wanted; 3) says, “I assume it was illegal”; 4) regarding Ukrainian President Zelensky’s commitment to the investigation, “Trump wanted it public”; 5) Rudy Giuliani would be writing the public statement for President Zelensky