All “Arms for Dirt” Lead to Putin 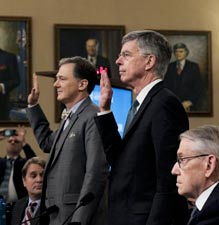 You would think this past seven days would offer more than enough fodder for a weekly chronicler of political current events from the perspective of an average person who pays close attention to the news. And it does. But the painfully slow-turning wheels of justice are exhausting, frustrating, and depressing. I’m constantly lamenting the evil power of Trumpism’s colossally unethical communication machine. Its continuous repetition of any piece of information, no matter how outlandish or unreal, makes it real for 30-40% of the U.S. electorate — Trump’s base of supporters. What’s the meaning of it all? When will the White House be cleansed of Donald’s obvious compound criminality? (scroll down for full article)


You would think this past seven days would offer more than enough fodder for a weekly chronicler of political current events from the perspective of an average person who pays close attention to the news. And it does. But the painfully slow-turning wheels of justice are exhausting, frustrating, and depressing. I’m constantly lamenting the evil power of Trumpism’s colossally unethical communication machine. Its continuous repetition of any piece of information, no matter how outlandish or unreal, makes it real for 30-40% of the U.S. electorate — Trump’s base of supporters. What’s the meaning of it all? When will the White House be cleansed of Donald’s obvious compound criminality?

On Wednesday, Congress held its first open impeachment hearings. Pundits and some 14 million average people who pay close attention to the news tuned in. An additional group heard the highlights on the evening news. The majority of people still aren’t focused on it. And the 30-40% will never care because their minds are made up. Donald can shoot someone on Fifth Avenue (or lock up children or call white supremacists “fine people”; I could go on). These people love him because of his “CIA” mentality: corruption, incompetence, and amorality. He spits in the eyes of the “elite” and the “intellectuals,” i.e., the people who know what they’re doing.

Just to show off how much I pay attention to the news, I will now give you the full, important-sounding titles of the two witnesses that came before the first open hearing of the Trump impeachment hearing committee: chargé d’affaires ad interim (acting ambassador) to Ukraine William B. Taylor Jr. and Deputy Assistant Secretary for European and Eurasian Affairs George P. Kent.

Kent and Taylor were discounted as “Never-Trumpers,” “professional nerds,” and “unelected bureaucrats” who can’t accept that the president makes foreign policy, not them. And besides, all they have is “secondhand hearsay” and other redundant, repetitious information.

Kent and Taylor have about eight decades of public service between them, serving under all U.S. presidents since Ronald Reagan. Taylor graduated fifth in his Class of 1969 from West Point. He saw combat, serving in Vietnam for 18 months, and was awarded multiple medals. They both were appointed to their current posts by Trump’s own Secretary of State. They both are fervent nonpartisans. And they’re both — wait for it — unimpeachable.

Here are the highlights of their testimony:

— Both confirmed that extortion’s 1) harm to U.S. national security and 2) contribution to lost Ukrainian lives, at the hands of Putin aggression, during the aid holdup

— Both described an “irregular” diplomacy channel led by Rudy Giuliani for the purposes of digging up false dirt on Biden and supporting self-dealing corrupt Ukrainian businessmen; Kent emphasized that Giuliani was acting in Trump’s interests, not America’s: “I believe [Giuliani] was looking to dig up political dirt on [Trump’s] potential rival in the next election cycle”; essentially, during the ostensible U.S. effort to help Ukraine fight internal corruption, the Trump administration was influencing its government to become more corrupt

— Both confirmed Biden’s intervention on Ukrainian corruption as Obama’s VP was in line with public U.S. and Western-allied policy; the West wanted the corrupt former Ukrainian prosecutor general Viktor Shokin out of office, and Joe Biden got it done, which is not parallel to Trump seeking dirt on his primary political opponent

— Taylor confirmed that the Ukrainian government clearly knew Trump was holding up the military aid, debunking the defense of “no quid pro quo if there was no quo”

— Taylor reported that his aide overheard a Sondland-Trump unsecured cellphone call while Sondland and the aide were in Ukraine July 26, the day after Trump personally attempted to extort Ukraine’s president; Trump asked Sondland personally for an update on the Ukrainian Biden probe, and Sondland told him “the Ukrainians were ready to move forward”; Sondland then hung up and told the aide, “President Trump cares more about the investigations of Biden” than Ukraine

All Roads Lead to Putin

Finally, George Kent and Bill Taylor gave a master class for the masses on why Ukraine is important to America. It was a clear explanation that junior high students could understand. All they had to do was care to listen. Here’s the gist:

— Russia is our enemy (notwithstanding President Trump’s consistently obsequious posture toward Putin and his policies).

— Ukraine borders Russia and is one of the largest countries in that region; it is the buffer between Russian aggression and Western Europe.

— The security of Western Europe and containment of Russian aggression are essential to U.S. national security.

— Ukraine finally has a government that is eager to fully adopt anti-corruptive, pro-Western democratic values. Since its 2014 revolution, President Zelensky’s new government offers the best hope for a strong, American-allied Ukrainian democracy.

— Russia invaded Ukraine in 2014 — stealing territory the equivalent size of the U.S. forfeiting Texas — and is still waging war against Ukraine, presenting an existential threat.

— Any hesitancy by the U.S. government to exhibit full support for Ukraine, for its developing government and fight against Russia, is seen by Putin as tacit U.S. permission to continue his deadly aggression (13,000 Ukrainian lives have been lost) — in Ukraine and elsewhere. U.S. equivocation also greatly weakens Ukraine’s bargaining position in its negotiations with Russia to end the war.

— Therefore, any action by Trump to deny or delay support to Ukraine, especially in violation of congressional mandate, emboldens Russia and kills more Ukrainians. It endangers Ukraine, the greater region, and the world, including American national security. Trump has withheld aid and support for the illegal, immoral, self-dealing purpose of falsely influencing the 2020 presidential election in his favor.

In a now-famous account of an Oct. 17, 2019, White House meeting, House Speaker Nancy Pelosi (D-Calif.) angrily pointed at President Trump and asked why do “all roads lead to Putin” with you? The current event that drew her ire was Trump pulling U.S. troops out of Syria, which was a tremendous benefit to Russian President Vladimir Putin (and Turkey’s President Erdogan) and mildly condemned even by Trump’s Senate allies.

Of course, Pelosi was also thinking of the myriad other examples of Trump always coming down on the side of pro-Putin policies, such as the “Hinky in Helsinki” press conference, his fight against U.S. sanctions on Russia, pushing for Russia’s reentry into the G8 — I could go on.

And here we are again. Trump needs illegal help to discredit Joe Biden to win in 2020. And, hey, if that also helps out his buddy Putin, double bonus.

But the GOP cares not about the Trump-Putin bromance. Oh, occasionally one of Trump’s congressional factotums (great word) will bubble up with a comment about how Russia is “not our friend.” But in the Trump GOP, Republicans have abandoned their career-long anti-Russia stand because it helps Trump. Why does it help Trump? We can speculate, but someday we’ll know for sure.

In the meantime, beyond-reproach nonpartisan public servants George Kent and William Taylor are discounted as “Never-Trumpers” and “unelected bureaucrats” who can’t accept that the president makes foreign policy, not them. And besides, all they have is “hearsay” — and “secondhand information.”

Note that Trump is blocking any firsthand information witnesses from testifying.

Trump Republicans got nothin’. But damn if they won’t continue to make it into somethin’, especially for the 30-40%, which make it oh so easy. ■

[RECAP]: 11/5/2019 — Ambassador to EU Gordon Sondland has “supplemented” his congressional testimony (to avoid perjury charges), which is considered highly damaging to Trump because it takes away his one “no quid pro quo” witness: 1) says he “now recalls” a clear quid pro quo; 2) told Ukraine there would be “no U.S. aid” or White House visit without the Burisma/Biden/hidden DNC server investigation Trump wanted; 3) says, “I assume it was illegal”; 4) regarding Ukrainian President Zelensky’s commitment to the investigation, “Trump wanted it public”; 5) Rudy Giuliani would be writing the public statement for President Zelensky

11/7/2019 — Rudy Giuliani, Trump personal attorney, has been mentioned 430-plus times so far in impeachment witness transcripts