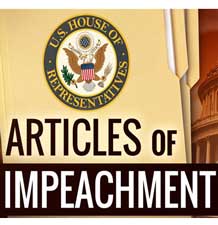 Americans’ support for impeachment has remained relatively static at 48% for, 45% against, even after the open congressional hearings that spelled out the bitter, impeachable truth in detail. This is due largely to the GOP’s wildly successful disinformation campaign. You know: A lie makes it halfway around the world before a truth-telling Jesus can lace up his sandals. And Donald’s lemmings eat it up. The Beloved Son, Himself, could descend from the heavens preaching the truth — that Donald J. Trump is the corrupt, incompetent, amoral Antichrist endeavoring to destroy American democracy to enrich himself — and white evangelicals, Republican legislators, and all other MAGA delusionists would say, “Well, you’re only the SON of God. The deep state has gotten to you, too.” (scroll down for full article)

1) There are 500 legal scholars on the record saying President Trump “engaged in impeachable conduct.” (Note that zero legal scholars, aside from lone GOP witness Professor Jonathan Turley, have rebutted the 500.)

2) The DOJ inspector general has released his exhaustive report examining the origins of the Trump-Russia probe, in which he stated, “We did not find any documentary or testimonial evidence that political bias or improper motivation influenced the FBI’s decision to conduct these operations.”

3) Attorney General William Barr is frightening DOJ and FBI officials and constitutional scholars with his dangerous lack of independence and shocking, increasing pro-Trump bias. His mounting prevarication, including the dissing of his own IG’s report, is helping Trump to continue weakening American democracy through egregious presidential abuse of power and attacks on governmental institutions and the Fourth Estate.

4) Americans’ support for impeachment has remained relatively static at 48% for, 45% against, even after the open congressional hearings that spelled out the bitter, impeachable truth in detail. This is due largely to the GOP’s wildly successful disinformation campaign. You know: A lie makes it halfway around the world before a truth-telling Jesus can lace up his sandals. Even Trump’s Attorney General, William Barr, has blatantly misled the public about fictitious FBI anti-Trump bias and partisan “spying” to support the president and his gross abuses of power. And Donald’s lemmings eat it up.

The Beloved Son, Himself, could descend from the heavens preaching the truth — that Donald J. Trump is the corrupt, incompetent, amoral Antichrist endeavoring to destroy American democracy to enrich himself — and white evangelicals, Republican legislators, and all other MAGA delusionists would say, “Well, you’re only the Son of God. The deep state has gotten to you, too.”

This prompts fond memories of Lavrov’s last visit in 2017, when Trump: 1) told Lavrov he just fired the “real nut job” FBI Director James Comey, and the Russia pressure was now “taken off”; 2) blurted out highly sensitive intelligence information, kept from even most of our allies, which ultimately prompted the CIA to “recall” our highest-level mole in Putin’s circle for fear Trump would get him killed by inadvertently outing him; 3) told Lavrov he was “unconcerned about Moscow’s election interference” the previous year, saying “the U.S. did the same thing to other countries”; and 4) kept U.S. press out of the Oval Office confab but allowed Russian press in, hence the surprise-to-Donald release of embarrassing buddy photos of Trump and Russian officials yukking it up.

All roads lead to Putin.

Which brings us to the supernova news of the week.

“Who sent Rudy Giuliani to Ukraine to smear Joe Biden?

“Who fired the anti-corruption ambassador in Ukraine, Marie Yovanovitch?

“Who told Ambassador Sondland and Ambassador Volker to work with Rudy Giuliani on Ukraine?

“Who told Vice President Pence not to go to President Zelensky’s inauguration?

“Who ordered his own chief of staff, Mick Mulvaney, to withhold critical military assistance for Ukraine?

“Who refused to meet with President Zelensky in the Oval Office?

“Who ignored, on July 25, his own national security council’s anti-corruption talking points?

“Who asked President Zelensky for a favor?

“Who stood on the White House lawn and confirmed that he wanted Ukraine to investigate Vice President Biden?

“Who stood on that same lawn and said that China should also investigate Vice President Biden?

“As to anything that we do not know in this investigation, Who has blocked us from knowing it?”

“President Trump and the White House.”

“So, as it relates to President Trump, is he an incidental player or a central player in this scheme?”

“President Trump is the central player in this scheme.”

“There’s a reason that no one has [stated the famous question of Watergate], ‘What did the president know, and when did he know it?’ From the evidence that you have presented, Mr. Goldman, and the Intelligence Committee’s findings, we know one thing, and one thing is clear: As it related to this scheme, the President of the United States, Donald J. Trump, knew everything.”

Rep. Eric Swalwell (D-Calif.) brilliantly summed up, in terms even Donald can understand, President Trump’s direction of, and participation in, the scheme to extort the announcement of a phony investigation — to produce dirt on Joe Biden and “evidence” of non-existent Ukrainian U.S. election interference — from Ukraine in exchange for desperately needed military aid and a coveted Oval Office meeting to show U.S. support.

The next day, House Democratic leadership announced two articles of impeachment: “Abuse of power” and “Obstruction of Congress.”

[Article I: Abuse of Power:] … Donald J. Trump has abused the powers of the Presidency, in that:

Using the powers of his high office, President Trump solicited the interference of a foreign government, Ukraine, in the 2020 United States Presidential election. He did so through a scheme or course of conduct that included soliciting the Government of Ukraine to publicly announce investigations that would benefit his reelection, harm the election prospects of a political opponent, and influence the 2020 United States Presidential election to his advantage. President Trump also sought to pressure the Government of Ukraine to take these steps by conditioning official United States Government acts of significant value to Ukraine on its public announcement of the investigations. President Trump engaged in this scheme or course of conduct for corrupt purposes in pursuit of personal political benefit. In so doing, President Trump used the powers of the Presidency in a manner that compromised the national security of the United States and undermined the integrity of the United States democratic process. He thus ignored and injured the interests of the Nation. …

[Article II: Obstruction of Congress:] … Donald J. Trump has directed the unprecedented, categorical, and indiscriminate defiance of subpoenas issued by the House of Representatives pursuant to its “sole Power of Impeachment.” President Trump has abused the powers of the Presidency in a manner offensive to, and subversive of, the Constitution, in that: …

In response [to subpoenas seeking documents and testimony deemed vital to the impeachment inquiry], without lawful cause or excuse, President Trump directed Executive Branch agencies, offices, and officials not to comply with those subpoenas. President Trump thus interposed the powers of the Presidency against the lawful subpoenas of the House of Representatives, and assumed to himself functions and judgments necessary to the exercise of the “sole Power of Impeachment” vested by the Constitution in the House of Representatives. …

Wherefore, President Trump, by such conduct, has demonstrated that he will remain a threat to the Constitution if allowed to remain in office, and has acted in a manner grossly incompatible with self-governance and the rule of law. President Trump thus warrants impeachment and trial, removal from office, and disqualification to hold and enjoy any office of honor, trust, or profit under the United States.

[RECAP]: 12/4/2019 — CONGRESS JUDICIARY CMTE. HOLDS 1ST OPEN IMPEACHMENT TESTIMONY HEARINGS — constitutional experts testify about what constitutes impeachable offenses; consensus is: 1) Trump abused his power (bribery, obstruction of Congress, etc.); 2) Trump traded/endangered national security for personal gain; 3) Trump attempted to illegally influence the 2020 presidential election; 4) any one of these 3 offenses is impeachable, but this is the 1st time in history any president has committed all 3

12/6/2019 — White House sends notice that it will NOT participate in House Judiciary Cmte. impeachment proceedings

12/9/2019 — DOJ Inspector General releases long-awaited report on Trump-Russia investigation: 1) there was no FBI political bias; 2) FBI had adequate “predication” to open investigation; 3) no “spying” occurred; 4) there were significant mistakes made in FISA warrant processes, which warrant examination and overhaul