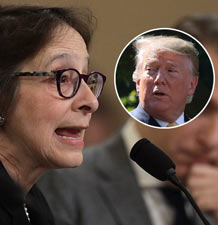 Testimony by four prominent constitutional law professors before the House Judiciary Committee yesterday changed virtually zero minds about President Donald J. Trump’s impeachment proceedings. Critical thinkers and truth-seekers still believe the president committed egregious impeachable offenses and should be removed from office. Sycophantic, self-serving, inveterate fabulist Republican legislators and members of their know-nothing, see-no-evil Trump base of supporters still believe the president did nothing wrong and should be allowed to continue destroying our democracy with more “nothing-wrong” behavior. Was that too harsh? (scroll down for full article)


“President Trump’s conduct clearly constitutes impeachable high crimes and misdemeanors. … Ultimately, the reason the Constitution provided for impeachment was to anticipate a situation like the one that is before you today. If we cannot impeach a president who uses his power for personal advantage, we no longer live in a democracy, we live in a monarchy or a dictatorship. …

“‘If the president could not be impeached,’ [founding father William Richardson] Davie said, ‘he will spare no efforts or means whatever to get himself reelected.’”

“[I]f what we’re talking about is not impeachable, then nothing is impeachable.”

“Because this is an abuse that cuts to the heart of democracy, you need to ask yourselves, if you don’t impeach a president who has done what this president has done … then what you’re saying is, it’s fine to go ahead and do this again. … If we are to keep faith with the Constitution, President Trump must be held to account. …

“Our elections become less free when they are distorted by foreign interference. But that distortion is magnified if a sitting president abuses the powers of his office actually to invite foreign intervention.”

“The use of military aid for a quid pro quo to investigate one’s political opponent, if proven, can be an impeachable offense.”

Was I too harsh?

There were three credible constitutional law professors called by Democrats. There was one professor, Jonathan Turley, called by Republicans — apparently, the only one they could find who would go on record in support of the president. Turley was there to exhort the Dems to slow down with the impeachment thing, that there wasn’t enough evidence yet. This inadvertently highlighted the numerous prime witnesses, who could implicate the president further, who have followed Trump’s orders not to honor congressional subpoenas. Moreover, Turley was wrong when he testified that no other American impeachment process has moved as fast as Trump’s, which will have been at least 70-some days. Bill Clinton’s was in the 70-some-days range, and Andrew Johnson’s 1868 impeachment process took less than a week.

Turley stated, “The use of military aid for a quid pro quo to investigate one’s political opponent, if proven, can be an impeachable offense.” As one pundit noted, you could see the blood drain from GOP committee members’ faces. The good professor also said the infamous July 25 Trump-Ukraine call was “anything but perfect.”

Additionally, committee Democrats pointed out that Turley’s view of what defines a minimally impeachable offense in the day of Trump is a 180-degree reversal (in Trump’s favor) from his congressional testimony during the Bill Clinton impeachment era.

Additionally, additionally, Professor Turley was inexplicably unaware that no other president in American history has obstructed Congress across the board with a blanket order to ignore all requests and subpoenas for documents or testimony. This is common knowledge among constitutional scholars and stands out because it is so criminally conspicuous.

In essence, the Republicans’ lone law professor did not provide the defense they had hoped for.

The three credible law professors — Noah Feldman, Michael Gerhardt, and Pamela Karlan — were of one mind regarding the actions of President Trump: 1) he abused the power of his office (through bribery, obstruction of Congress, etc.); 2) he sacrificed U.S. national security for personal gain; and 3) he attempted to parlay foreign aid into foreign influence on the 2020 presidential election.

This is one of the very few defenses Republicans have: “There is less than a year remaining until the next election, therefore the voters should decide Trump’s fate.” They flail it around to camouflage the president’s criminal and impeachable behavior. I’ll let Professor Karlan put this argument to rest:

“[Congress needs] to act now to prevent foreign interference in the next election like the one we had in the past. … One of the key reasons for including an impeachment power [in the Constitution] was the risk that unscrupulous officials might try to rig the election process.”

One other reason: The continuous bowing to (our enemy) Russia’s interests and weakening of U.S. national security warrant accelerated action by Congress.

Just to refresh my own memory, here are some of the bitter truths about President Donald J. Trump:

— He has systematically engaged in (tweet) witness tampering through the public intimidation of his former personal lawyer-fixer Michael Cohen (now incarcerated), former ambassador to Ukraine Maria Yovanovitch (now lionized) — during her testimony, the intelligence community Ukraine scandal whistleblower, and others I’m forgetting. He also has publicly (tweet) praised witnesses who have withheld damaging testimony such as former campaign manager Paul Manafort (now incarcerated) and former National Security Adviser for 21 days Michael Flynn (now awaiting sentencing). The sum of these communications sends a clear message to all: you dish on Trump and you’ll “be going through some things.”

— He has obstructed Congress through a blanket order to White House, Cabinet, and all other administration staff not to honor any congressional subpoenas for testimony or documents. As the three credible scholars testified, if Congress cannot perform its constitutional duty of executive oversight, this puts the president above the law, operating as a monarch with no accountability.

— He has obstructed justice, as laid out in the Mueller report and elsewhere. Even the GOP law professor witness had to concede that the Trump orders to then-White House counsel Don McGahn — to fire Special Counsel Robert Mueller and, failing that, ordering McGahn to lie about the original order — were extremely troubling.

— He has violated the domestic and foreign emoluments clauses through entities such as the Trump D.C. hotel, Trump Scottish golf resort, all presidential travel expenses billed to Trump properties, and Trump Steaks. Oh, wait — Trump Steaks is out of business.

— He and his organizations are under more criminal investigations than anyone can keep track of, including probes of the Trump (“charitable”) Foundation, Trump University, Trump Organization, Trump campaign, Trump transition team, Trump inaugural committee, and Trump presidency.

— He consistently employs the adjective “Democrat” rather than “Democratic,” as in the “Democrat Witch Hunt Hoax!” This one burns my a** the most. Republicans’ continued use of this middle school, ad hominem grammatical slight completely strips them of all critically thoughtful credibility. I say this: When they attempt to go after the party trying to root out corrupt, incompetent, and amoral presidential behavior, it’s called the “DemocratIC Witch Hunt Hoax!”

To add insult to opprobrium, the bottom has fallen out of Trump’s primary “Democrat Witch Hunt Hoax!” defense, i.e., that the deep state influenced the FBI to launch its initial investigation into Russian influence on the 2016 Trump campaign and the election as a whole.

“The prosecutor handpicked by Attorney General William P. Barr to scrutinize how U.S. agencies investigated President Trump’s 2016 campaign said he could not offer evidence to the Justice Department’s inspector general to support the suspicions of some conservatives that the case was a setup by American intelligence. …

“[U.S. Attorney John] Durham informed [DOJ Inspector General Michael] Horowitz’s office that his investigation had not produced any evidence that might contradict the inspector general’s findings. … The previously unreported interaction with Durham is noted in a draft of Horowitz’s forthcoming report on the Russia investigation, which concludes that the FBI had adequate cause to launch its Russia investigation.”

Attorney General Barr, an obsequious presidential lickspittle who has forfeited all DOJ independence and appearance of independence from the White House, has indicated he “doubts” his own inspector general’s findings of no Democrat Witch Hunt Hoax! against the Trump campaign.

These are my undergraduate ad hominems. Was I too harsh? ■

12/4/2019 — CONGRESS JUDICIARY CMTE. HOLDS 1ST OPEN IMPEACHMENT TESTIMONY HEARINGS — constitutional experts testify about what constitutes impeachable offenses; consensus is: 1) Trump abused his power (bribery, obstruction of Congress, etc.); 2) Trump traded/endangered national security for personal gain; 3) Trump attempted to illegally influence the 2020 presidential election; 4) any one of these 3 offenses is impeachable, but this is the 1st time in history any president has committed all 3