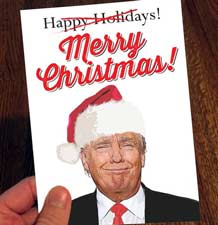 Thank Jesus for the anti-Trump Republicans who have given us permission to say “Happy Holidays” again. During Donald’s War Against the War on Christmas, we were not allowed to combine Christmas and New Year’s greetings into one concise salutation encompassing the love for humankind many people feel through the period starting just before Dec. 25 and ending shortly after Jan. 1. Instead, we were forced to delineate exactly which holiday we were offering greetings for: either “Merry Christmas” or “Happy New Year.” Any attempt at merging the two into “Happy Holidays” was considered blasphemy and an affront to religious (read: Christian) freedom.

But now that President Trump has lost his War on the War Against Christmas, he might be looking for conflagrationist opportunities in Iran and Iraq. That certainly would take the nation’s focus off impeachment.

What is killing 25 Iranian militia members in retaliation for the death of one American contractor? A good start.

With our religious freedom now restored (including the right to secularism), and the “Happy Holidays” over with, it’s time to return to the business of saving our country.

Perhaps the holiday flirtation with love for humankind has touched some GOP legislators. Perhaps the rising tensions in Iran and Iraq are scaring the bejesus out of them, knowing the inept, self-dealing Trump is pulling the levers of foreign policy.

It is telling to note the long list of prominent Republicans who put country over party. Now juxtapose these with the long list of Republican invertebrates in Congress who, solely for seat-preservation, have decided to hold their noses, look the other way, and let a corrupt, incompetent, amoral president continue to degrade the presidency, endanger American democracy, and threaten foolish wars.

I posted this list early in 2019, but it bears remembrance.